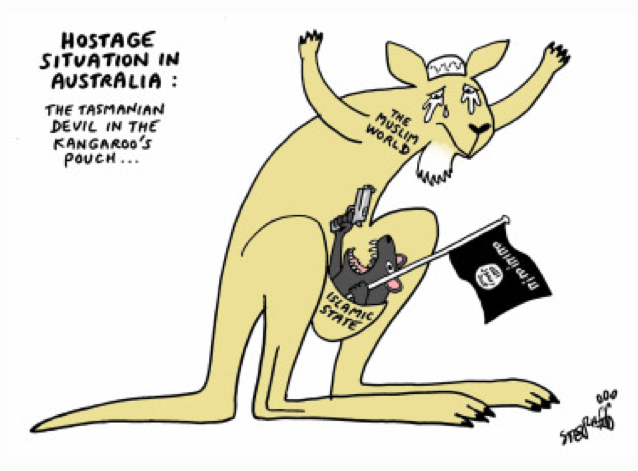 Stephff (Stephane Peray), the artist behind an ISIS-skewering cartoon published in the Jakarta Post that’s put the paper’s chief editor in the crosshairs of Indonesia’s blasphemy laws, has made his first statement concerning that controversy — by means of a cartoon.

In his July 3rd cartoon for the Jakarta Post, Stephff depicted an ISIS operative hoisting an ISIS flag on which the flag’s design morphs into a skull and crossbones — while an armed colleague holds hostages at gunpoint in the background.

The Post printed an apology for the cartoon a few days after publication when groups complained that the cartoon’s ISIS flag also bears the phrases “There is no God but Allah” and “Allah, Mohamed and Apostle.”

In defending the cartoon and The Jakarta Post’s publication of it, Suryodiningrat responded: “What we produced was a journalistic piece that criticised the Isis movement, which has carried out violence in the name of religion.”

Stephff’s Dec 15 cartoon is about a hostage situation in Sydney, Australia — though it can also be seen as his indirect comment on a newspaper in Jakarta being held hostage by means of press-censoring blasphemy laws.

Meanwhile, the date for editor Meidyatama Suryodiningrat’s police interrogation was postponed following meetings between Indonesia’s Press Council and that country’s National Police. The case is now under review, with a Press Council spokesperson saying that the publication of the cartoon would be classified as an ethics violation rather than blasphemy.

Amnesty International has called for the administration of Indonesia’s newly elected President Joko Widodo to repeal the blasphemy laws. In a November report, Amnesty stated that Indonesia’s blasphemy statutes are “fundamentally incompatible with Indonesia’s obligations under international human rights law, and violate legally binding provisions on freedom of expression, conscience and religion, equality before the law and freedom from discrimination.”

What you can do

Letters can be written to Indonesia’s President, Minister of Law and Human Rights, and Attorney General [addresses below] asking that the principals of freedom of the press and freedom of expression be respected and that Meidyatama Suryodiningrat not be charged. (CRNI suggests that all letter writers follow Amnesty International’s tips for effective letters. Letters should be: Brief; Respectful and reasonable in tone; Instructive of all the positive opportunities to be gained from repealing their country’s blasphemy laws.)