Brett Bundale in The Chronicle Herald. 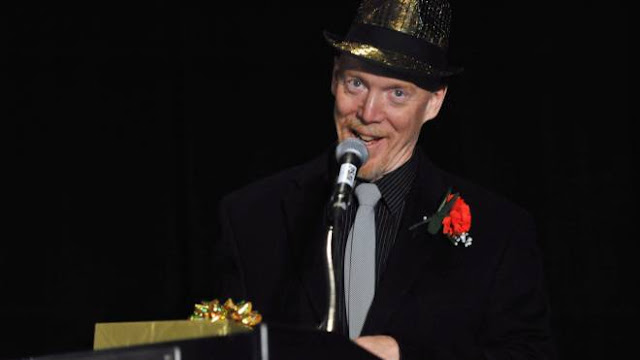 Bruce MacKinnon was named journalist of the year at the National Newspaper Awards ceremony.

This is the first year the NNAs have designated a journalist of the year.

MacKinnon, who received a standing ovation, was chosen from among the 22 category winners, with the decision made by a panel of previous NNA laureates.

Highly admired for his ability to satirize, slice and dice, poke fun at and intelligently comment on the affairs of the day, MacKinnon has accumulated a total of 16 Atlantic Journalism Awards over his 30 years with The Chronicle Herald.

He has earned the respect and admiration of readers, leaders of government and fellow cartoonists around the world with his classy and yet down-home style. His irreverence and bad-boy-at-the-back-of-the-class attitude spares no one and often evokes laughs, snorts, chuckles and giggles — and it rarely disappoints.

But it was his poignant and breathtaking work on the death of Cpl. Nathan Cirillo in 2014 that managed to speak for a country in mourning.

No blame, no outrage or moralizing, no anti-terror or anti-religion or bitter political beliefs were expressed in the cartoon, which appeared in The Chronicle Herald on Oct. 23, the day after Cirillo died.

MacKinnon simply took heartbreaking note of where the young soldier was when he was shot in the back by a gunman. An unloaded weapon at his side, the ceremonial guard had been at his post at Canada’s National War Monument in Ottawa.

In response to this tragedy, MacKinnon drew an image that spoke to the sorrow many felt over the loss of such a young man — complete sadness at the loss of a young life.

“The war memorial just had so much symbolism,” MacKinnon said in an interview from Toronto after winning the national award. “The one thing that was certain in the story was that Nathan Cirillo was killed at the foot of the war memorial, so the concept itself came fairly naturally.”

MacKinnon brought life to the bronze, war-weary soldiers on the march who stand atop the monument. In the cartoon, one of them cradles Cirillo’s body at the base of the statue, another reaches down to assist, others turn their sad faces toward the sight of yet another dead soldier.


Despite being surprised by his win, MacKinnon admitted “there is no question the cartoon had more impact than almost any other cartoon I remember doing.”

Proceeds from the sale of the cartoon will be donated to the families of Cirillo and Warrant Officer Patrice Vincent, a Canadian soldier also slain on Canadian soil that same week last October.