WASHINGTON -- Maine Gov. Paul LePage (R) said Wednesday that he'd like to shoot the cartoonist for the Bangor Daily News, a joke that fell flat in light of the January shooting that killed five Charlie Hebdo cartoonists in France.

LePage made his comments about cartoonist George Danby on Wednesday in front of a group of teenagers attending Dirigo Boys State, a youth leadership program held in Waterville, Maine. Danby's son, Nick, was in attendance and asked the governor a question.

According to Danby, LePage was skeptical of the question and asked Nick where he received his information. Nick said he reads newspapers, and the governor responded that he shouldn't trust what newspapers say. Nick eventually asked what LePage thought of the Bangor Daily News' cartoonist, at which point LePage made his joke, Danby said.

Danby added that his son didn't think much of it, and many people in the audience laughed. But Danby himself didn't find it quite as funny.

"The governor shouldn't be making those comments, even though I know he doesn't care for my stuff because I pick on him quite a bit in my cartoon," he told The Huffington Post. "But it's always within the boundaries of fairness and free speech and satire."

On Jan. 7, 2015, two terrorists attacked employees of the French satirical publication Charlie Hebdo and killed 12 people, including five cartoonists. The publication had also been targeted in the past for its cartoons that lampooned the prophet Mohammed.

Danby said that in light of that attack, joking about shooting cartoonists was particularly unfunny, especially since he was at the conference to speak about the positive side of politics.

"My other thought was, what if this was reversed? If I had made a comment. I'd be in big trouble today," he added. 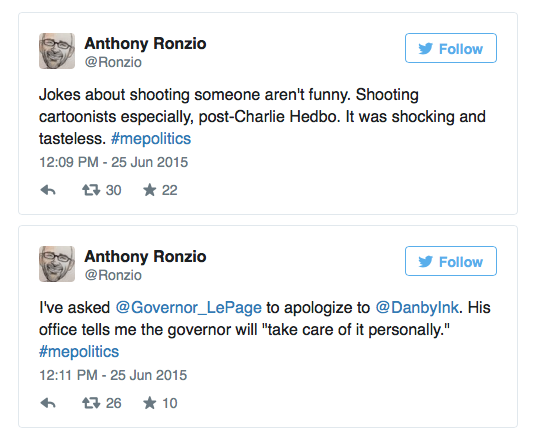 Danby said he had not yet heard from LePage, and the governor's office did not return The Huffington Post's request for comment.
LePage does not like Maine's newspapers, as he has made clear on several occasions.

In August 2014, he said the "worst part" of his life was that "newspapers are still alive."

In February 2013, he said newspapers were his "greatest fear."

He has also said he wants to "blow ... up" the headquarters of the Portland Press Herald.

The Idiot Thug Running Maine in The Daily Beast.
Published by Bado at 1:00 AM