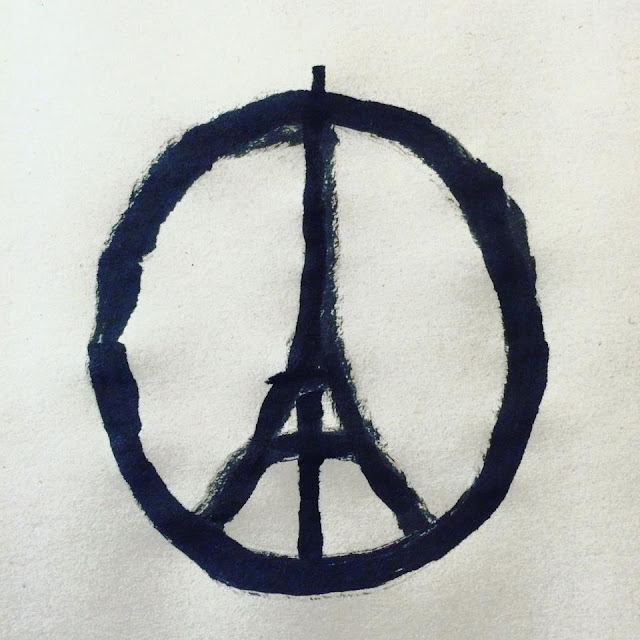 "In all this horror there’s something positive that people are coming together in a sense of unity and peace."

Jean Jullien had just begun his vacation when he heard on the radio about the terrorist attacks in his native France that killed more than 120 people on Friday. While others around the world struggled to put their feelings about the violence in Paris into words on social media, Jullien, a professional illustrator, picked up his brush instead.

“I express myself visually, so my first reaction was to draw a symbol of peace for Paris,” Jullien, who says his friends and family are safe and accounted for, told TIME over Skype on Saturday from a location he did not wish to disclose. “From there it seems to have gotten a bit out of my hands.”

That poignant painting has quickly become a unifying symbol for people in France and beyond. A cell-phone picture of the illustration that Jullien posted to his Instagram on Friday evening has garnered at least 129,000 likes on Instagram and 48,000 retweets on Twitter, as well as countless other uncredited shares. Instagram’s own post of the image has topped 1.3 million likes.

“I can’t say I’m happy because it’s such a tragedy and such a horrible event,” he says. “I can just say that in all this horror there’s something positive that people are coming together in a sense of unity and peace.”

It’s even been shared by celebrities such as John Legend and One Direction’s Harry Styles. “People are asking me, ‘Are you proud?’ and all that,” Jullien said of the famous figures distributing his work. “No, at the moment what touched me more, so to speak, is the fact that everyone shared it—not just famous people but everyone all over the world. The main purpose of the image was to communicate peace and solidarity, and that’s exactly what it seems to have done.”

Jullien also says he’s not bothered by all the people sharing the image without attributing it to him. “Some people were trying to alert me that people were using it without credit,” he says. “That’s not really the point. I did not create the image to get credit. I created a symbol for everyone to share. It’s not for ownership and pride.”

And while his illustrations are typically more humor-based than the image that’s now brought him international attention, Jullien notes that his Paris peace sign has had a similar impact on those who see it. “What I normal do is try to bring a smile on peoples’ faces with my work,” he says. “I got someone emailing me saying they were happy to have seen my message because the feeling of peace and unity took over the raw anger that can come from such an event.”
Published by Bado at 7:54 AM