Robert Everett-Green in The Globe & Mail. 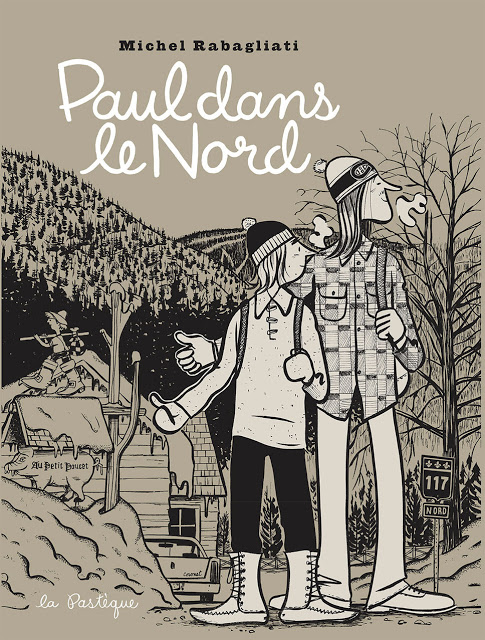 It’s 15 minutes before the supposed end of a two-hour book signing at my local Montreal bookshop, and the aisles are still crowded with people waiting to get a signature and a few words from Michel Rabagliati, diligently signing books at a desk near a big stack of his graphic novels.

“I’m surprised it’s this busy,” one woman tells me. But in another way, she admits, the long wait is no surprise at all. Rabagliati’s graphic tales are best-sellers in Quebec. His fluidly drawn series of eight books based on the life and adventures of his alter ego Paul have sold more than 300,000 copies for Montreal publisher Les Éditions de la Pastèque. A live-action feature film based on his 2009 book Paul à Québec was still showing in eight Montreal theatres last week, almost two months after it opened.

Some of his titles have been translated into English, and he has a solid reputation outside Quebec. In his home province, however, Rabagliati’s works are cherished as narratives that could only be created here, about this place and about the times through which the cartoonist and his drawn character have lived.

Paul dans le Nord, which came out in September, is about Paul’s adolescence and touches on the predictable themes of teenage angst, social awkwardness and first romance. But it also commemorates the 1976 Montreal Olympics as a kind of wondrous televised backdrop to daily life in the city during that period. It vividly evokes the civic pride of that experience, as a thread running through and alongside the sometimes sad, sometimes farcical adventures of the introverted hero.

“There is such rapport with Montreal, with the life of Montrealers and Quebeckers,” the woman in the bookshop queue says. “His dialogue is very much the way people speak, the expressions and idioms are very Québécois.”

For example: one character in Paul dans le Nord describes a motorbike he covets as “la pire plusse méchante bombe du démon sur la route.” Rabagliati skilfully modulates degrees of slang, profanity and franglais to delineate character and to enhance the reader’s feeling that, although the outlines of this tale may not be strikingly novel, it could only be told in this way in Quebec.

“His scenarios are very simple, very human, very down to earth,” another man in line tells me. “They speak to everyone – middle-class people, young parents, many types of people in Quebec.”

Rabagliati’s tales are told sympathetically and socially, as the narratives of a community of friends and family. There’s usually a bit of uplift at the end, even in Paul à Québec, which focuses on the decline and death of Paul’s father-in-law. But even the less sombre stories are salted with disappointments and moments when the narrative takes a turn toward the sharp edges of life.

Many of those edges are smoothed away in the cinema version of Paul à Québec, which also omits the book’s topical, partisan references to Quebec’s sovereignty referendum in 1995. The film is more sentimental than the book, but it also adds an element that may appeal to viewers intrigued by the way Rabagliati’s graphic stories shadow his own life.

As the father-in-law sickens, Paul – played by a self-effacing, rubbery-featured François Létourneau – sketches what he sees, gradually becoming conscious of the narrative developing at the end of his pencil. Finally he draws his own comic-book face, as if for the first time – or rather, Rabagliati draws it, his hands doubling in close-up for those of the actor. The old man’s death is seen to coincide with Paul’s birth as the central character in Rabagliati’s graphic series.

When a fairly conventional feature film starts venturing into that kind of meta-narrative, you know you’re in the presence of a real pop-cultural phenomenon. Rabagliati’s narratives aim to please and to warm the heart, but in Quebec’s buoyant world of la bande dessinée, he is, as one of his characters might say, la pire plusse méchante bombe du démon.