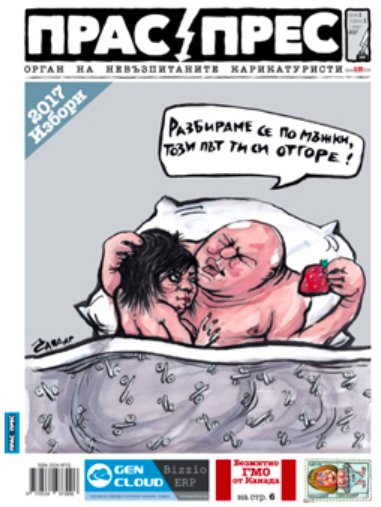 After complaining that their satirical new newspaper, Pras Press, had been blocked from reaching newsstands, the cartoonists and writers behind it have decided to sell copies directly on the streets.

Cartoonists and publishers behind a new newspaper, published by Bulgaria’s “Society of Rude Cartoonists”, plan to sell copies of Pras Press directly on Slaveikov Square in central Sofia, famous as a book distribution hub.

Other volunteers will also take to the streets of Sofia and other cities to distribute the satirical edition, which was compared to the French magazine Charlie Hebdo when the first copies went on release on March 1st.

“We are trying to avoid the monopoly on print distribution in Bulgaria,” Tchavdar Nikolov, a popular cartoonist and one of the publishers of Pras Press, told BIRN on Monday.

He and the other publishers – journalist Ivan Bakalov and cartoonists Christo Komarnitski, Alla and Chavdar Georgievi, on Sunday said their contractor, State Distribution Company, had stopped most of the print circulation of 10,000 copies from reaching news stands.

“Over nine-tenths of our circulation has been blocked somewhere, stopped,” Bakalov said, adding that only a tenth of the copies had reached readers in the country.

He explained that many readers had called him and his colleagues on March 1, complaining that they could't find the newspaper at the kiosks.

“This continued throughout the day; we went about ourselves, asked around and found out that at some key spots the newspaper had not been delivered at all or just one or two copies had been shipped,” Bakalov said.

The journalist accused the businessman and former MP Delyan Peevski of de facto controlling the newspaper's distribution, although he is not among the listed owners of State Distribution Company.

However, he and his colleagues link their problems with the distribution of their newspaper, which harshly mocks the political elite, to the ongoing electoral campaign.

Peevski is running for the post of MP again in early elections due on March 26 with the ethnic-Turkish dominated Movement for Rights and Freedoms, MRF.

“We are waging war against Peevski, who controls the sales; the distribution companies are his. A war on every front. He will be ‘Cover Girl’ of our next edition,” Bakalov said on Facebook on March 1st.

Chavdar Nikolov told BIRN that the team of the newspaper had not been able to reach the the distribution company since the day Pras Press was released, as their phones were off the hook.

The satirists pledged to bring the matter to the Commission for Protection of Competition, the state prosecution, as well as to the caretaker government and President Rumen Radev.

“Our right to make business and express ourselves freely has been violated,” Nikolov said, referring to Bulgaria’s low ranking, in 113th place, in the 2016 Press Freedom Ranking of Reporters without Borders.
Published by Bado at 12:00 AM