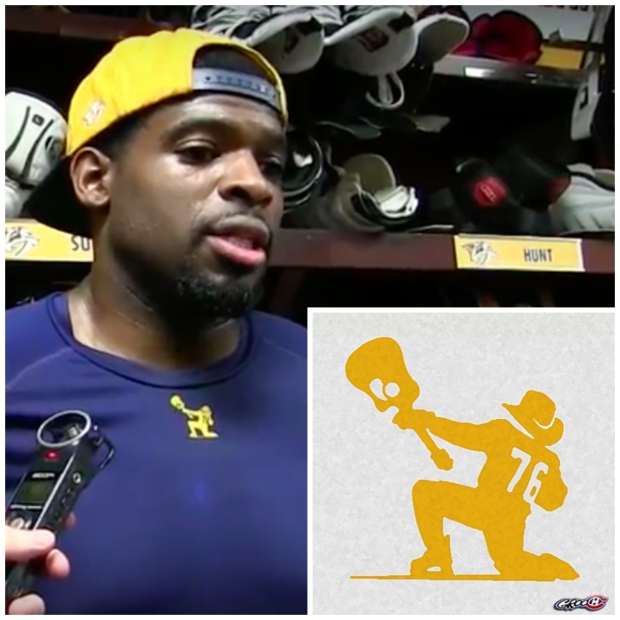 Southern Alberta hockey fan and cartoonist Robert de Gruchy was shocked to see a drawing he said he created emblazoned on his NHL idol's workout gear — without anyone asking his permission.

P.K. Subban, the beloved former Montreal Canadien who was traded to the Nashville Predators last year, appeared on TV to field questions from reporters at the end of February wearing a blue athletic shirt with a small yellow emblem.

But from his home in Lethbridge, Alta., Robert de Gruchy found the shirt's design just a little too familiar.

He says he drew the image months earlier of the defenceman in his iconic kneeling stance — in this case holding a guitar and sporting a cowboy hat as an homage to his new city.

De Gruchy says he never gave his permission to anyone to use his artwork, so he's mystified about how it ended up on Subban's chest.

Many of de Gruchy's cartoons inspired by Habs

De Gruchy grew up in Quebec and has been a lifelong fan of the Montreal Canadiens, the team that gave Toronto-born Subban his NHL debut.

The defenceman became a much-loved star and member of the community before being traded to the Predators in 2016.

Much of de Gruchy's cartoon work has been inspired by the Habs.

"I have a really big fan base with my cartoons, mostly with Habs fans. I think it's my way of being out here in Alberta and reaching out to the city I'm from," de Gruchy told CBC News.

De Gruchy published the artwork that appeared on Subban's shirt on social media in June — the day after Subban's trade to the Predators was announced.

"Oh, was I ever upset," de Gruchy recalls. "That was kind of my way of saying goodbye."

Just days later, de Gruchy was approached by two different fans from Nashville asking to use his cartoon on clothing, but he declined, amicably.

Then last week, one of those fans got back in contact with de Gruchy to let him know someone else had used the cartoon, and it had ended up on Subban's workout wear.

To put food on the table for his wife and six kids, de Gruchy works primarily as a security guard in Lethbridge.

A number of his cartoons have been published across the country. He reached one of his biggest goals last November when he got his first cartoon published in the Montreal Gazette. 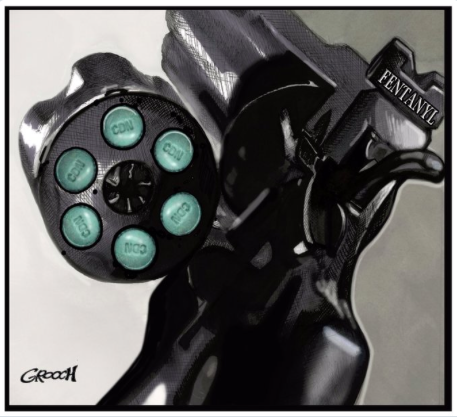 He recognizes that his chances of making it as one of the handful of successful editorial cartoonists in the country is slim. However, de Gruchy says that chance goes to zero if his name is stripped off of his work.

"I'm just confused. I love P.K. Subban. I would hate for him to think I was mad at him, because I'm not. I miss him," de Gruchy said.

"I'd love to know that something like that meant something to someone who meant so much to me."

A spokesperson for Subban said that the shirt, as well as a hat, had been given to the defenceman by a fan, but made no further comment.

Subban has been seen wearing the same shirt since inquiries were made to his public relations firm.

De Gruchy says he didn't expect to be paid for his work in this instance but would love it if his work was acknowledged.

"If P.K. had wanted to wear that on his shirt because he thought what I did was great, then yeah, that would thrill me. I would love that," de Gruchy said.

"But the fact that that communication never occurred, that kind of leaves a bit of a sting."
Published by Bado at 12:00 AM