Four pages* of the May 9, 1754 issue of Benjamin Franklin’s Pennsylvania Gazette, including the page with the original printing of the "Join, or Die" cartoon sold for the minimum bid of $40,000.

*It is my understanding that the original May 9, 1754 edition of the Pennsylvania Gazette was six pages. Two pages of advertising were not part of this package. 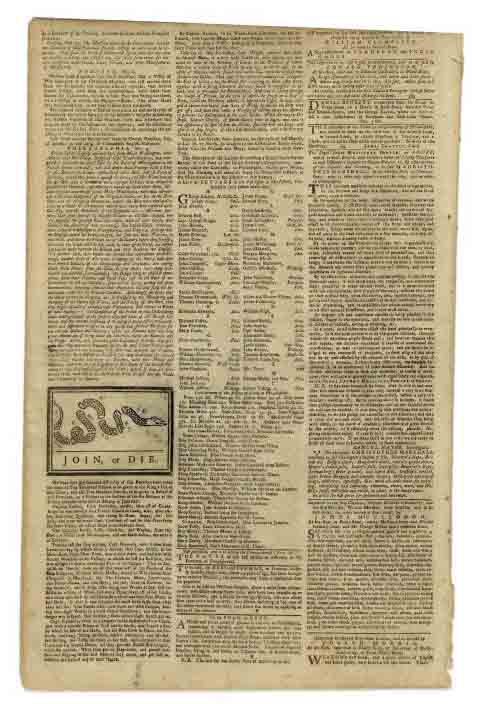 The most influential political cartoon in the history of America, the ''JOIN, or DIE'' severed rattlesnake designed by Benjamin Franklin and published in his ''Pennsylvania Gazette'' on 9 May 1754. This incredibly scarce newspaper is the very first printing of the ''JOIN, or DIE'' cartoon, and the only known copy apart from one other housed in the permanent collection at the Library of Congress.

Frustrated by the colonists' inability to join forces against westward expansion by the French, Franklin created this cartoon of a rattlesnake, cut into 8 pieces symbolizing the American colonies, to dramatically impart the effective message: join together as one cohesive body, or die. Along with the cartoon, Franklin published an editorial in the newspaper, urging the colonists to work together, reading in part,

''...The Confidence of the French in this Undertaking seems well-grounded on the present disunited State of the British Colonies...while our Enemies have the very great Advantage of being under one Direction, with one Council, and one Purse...''

Little did Franklin know at the time that his symbol of the dis-united rattlesnake would echo over twenty years later to inspire the colonists to unite against the British - Paul Revere added the ''JOIN, or DIE'' cartoon to the nameplate of his paper, the ''Massachusetts Spy'', and even later, with the ''Don't Tread on Me'' flag, any individual or group whose personal liberty is threatened.

The phrasing has also proved highly enduring, likely influencing John Stark, the Revolutionary War General from New Hampshire whose toast, ''Live free or die: Death is not the worst of evils'', inspired New Hampshire's motto, and again suggests that personal liberty is one of the highest human values, and a founding tenet of the United States.

Franklin's choice of a rattlesnake is curious for several reasons: as the timber rattlesnake was found throughout the colonies but not England, Franklin argued in an earlier 1751 editorial that the colonists should ship rattlesnakes to England in exchange for the criminals that England was sending to America.

Franklin now, however, seems to fully embrace the rattlesnake as metaphor, and would argue, during the American Revolution, its virtues. Using a pseudonym to conceal his identity, he wrote in 1775,

''...she has no eye-lids-She may therefore be esteemed an emblem of vigilance.-She never begins an attack, nor, when once engaged, ever surrenders...to those who are unacquainted with her, she appears to be a most defenseless animal; and even when those weapons are shown and extended for her defense, they appear weak and contemptible; but their wounds however small, are decisive and fatal:-Conscious of this, she never wounds till she has generously given notice, even to her enemy, and cautioned him against the danger of stepping on her.-Was I wrong, Sir, in thinking this a strong picture of the temper and conduct of America?''

While the British loyalists played upon Franklin's symbolism of the rattlesnake, arguing that the colonists were deceptive and cunning, Franklin turned the characterization on its head, skilled and interested as he was in the art of propaganda.

Ultimately, the symbolism would prove highly enduring and compelling: both the idea of uniting to fight a greater, more powerful enemy, and the power of a sudden, deadly attack by an underestimated opponent.