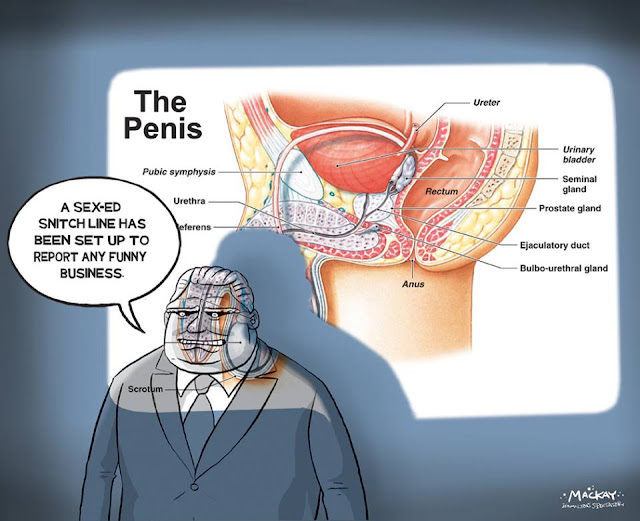 An editorial by Paul Berton in The Hamilton Spectator:


In offending readers, cartoon made its point
We are in the business of publishing content, not suppressing it

When it was brought to my attention before publication, I laughed out loud, and immediately recognized it would be problematic.

Indeed, some readers called it vulgar, another was disgusted and saddened, and said the paper "has sunk to the level of a tabloid." One writer didn't like the fact that it seemed to mock Ontario Premier Doug Ford, and added that he didn't like it either when MacKay made fun of "our president."

Why did we print it?

I could talk about the freedom of the press, the unique ability of satire to get to essence of an issue, or the importance of reflecting different points of view, and I could remind you that a cartoonist's views are not necessarily those of the newspaper, although sometimes they are. In the case of The Spectator, MacKay's views are his own.

Or we could have just killed the cartoon, arguing that any reference to a penis in connection with Ontario's premier is inappropriate, even if it is in the context of a heated debate over the future of sex education in the province. We could have decided our readers don't need that kind of thing at breakfast, let alone lunch or dinner. But that too, is the heart of the matter — and the point of the cartoon.

Ultimately, we are in the business of publishing content, not suppressing it. There have been times in the past when I thought I should have prevented something from publication, but in retrospect, I regret far more often the things we didn't print than those we did.

Besides, if we had spiked that cartoon, we would have denied many other readers the laugh that I and others experienced from it, and laughs these days are all too rare.

For not only did we receive complaints about the cartoon, we also received kudos in their wake. You can turn to today's letters-to-the-editor for some evidence of that. It is human nature to complain, but compliments are much less common.

Such supporters realize a good cartoonist never takes the issue as seriously as those in the midst of it — politicians usually, but often anyone in authority. True, cartoons often say in pictures what some of us are too polite to say in words, but they also make us look in the mirror, point out obvious or sometimes hidden inanities, and poke fun at people who take themselves too earnestly.
Published by Bado at 12:00 AM