A French adman claims victory in his legal battle with the US artist over a surreal campaign featuring a rescue pig and freezing model.

A French judge has found Jeff Koons guilty in his four-year-long legal battle with the creator of a surreal 1980s ad campaign who claims the American artist stole his work. 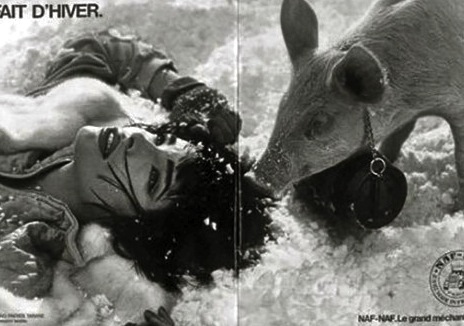 After seeing Koons’s work exhibited at the Pompidou Center in 2014, he sued the American artist for copyright infringement, accusing him of plagiarizing his advertisement to create a 1988 sculpture that was also called Fait d’Hiver.

Jeff Koons LLC was also fined €11,000 for reproducing the work on Koons’s website, while a publishing house that sold a book in which the work was reproduced was fined €2,000. The court did not, however, order the sculpture’s seizure.

Artnet News reached out to Davidovici’s lawyer, Jeff Koons’s studio, and the Centre Pompidou for comment but did not hear back by press time.

Davidovici’s campaign for the women’s ready-to-wear label featured a pig (Naf Naf’s mascot) with a cask of brandy around its neck coming to the aid of a model buried in an avalanche.

The pig’s brandy cask has been replaced by a flower garland, and there’s a penguin thrown in for good measure. According to the French newspaper Le Figaro, Davidovici’s lawyer, Jean Aittouares, says Koons’s work is a “servile copy.”

“It’s the same work in three dimensions, to which Jeff Koons added flowers, and two penguins [sic] to evoke the cold, which aims to stick to the original work.”

Aittouares told the newspaper. “He completes the plagiarism by giving his work the same title as the advert, Fait d’Hiver.“

The title, which translates to “fact of winter,” is a homonym of the French “fait divers,” meaning a short news item.

The suit had been ongoing since December 2014, when Davidovici first became aware of Koons’s sculpture ahead of a retrospective at the Centre Pompidou in Paris.

It was shown as part of his “Banality” series, for which the artist created sculptures from kitsch items, scenes from advertisements, and other copyrighted material.

At the time, the Pompidou’s then-president Alain Seban defended Koons’s work. “The whole point is to work from commercially purchased objects or images that come from advertising or magazines,” Seban said.

Despite Seban’s support, however, the sculpture’s lender pulled the work from the show amid the controversy.

One edition of Fait d’Hiver sold for $4.3 million at Christie’s New York in 2007. It is now in the collection of the Prada Foundation. (There are three editions of the work in total, plus an artist’s proof.)

This is not the first complaint lodged at Koons over a sculpture from this series.

In fact, a total of five lawsuits have sprung from “Banality”: Koons lost three, while another settled out of court. (Notably, French copyright law is generally not as sympathetic to appropriators and has a stricter definition of “fair use” than US law does.)

The most recent of Koons’s three losses occurred in March 2017, when Paris’s High Court ruled in favor of the estate of the French photographer Jean-François Bauret, who took a photograph of two children that formed the basis of Koons’s sculpture Naked. 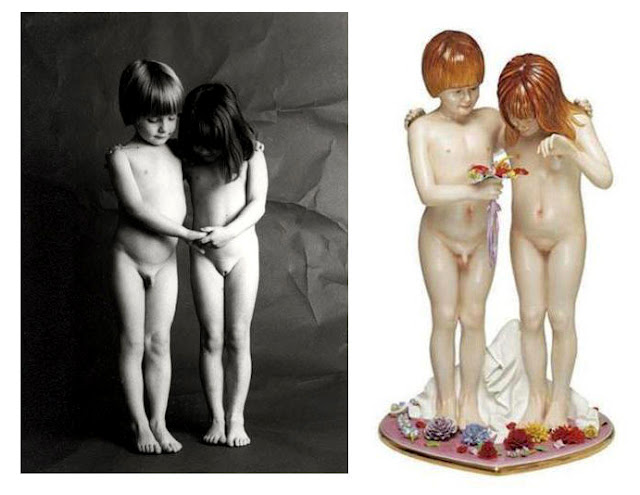 The court stated that Jeff Koons LLC and the Centre Pompidou, where the work was shown, would need to pay damages.
Published by Bado at 12:00 AM