In 1970, the Welsh illustrator Ralph Steadman landed in Louisville to cover the Kentucky Derby for Scanlan’s Monthly, and was picked up by Hunter S Thompson in a red convertible.

“Hunter took one look at me when I first met him and said: ‘Well, they said you were weird, but not that weird,’” said Steadman, 82, who can imitate an American accent perfectly over the phone from his studio in Kent.

That one trip sparked a 35-year friendship between the two. Thompson’s manic coverage of the derby came to define gonzo journalism, but the twisted, drug-addled stories that blurred fact with fiction were nothing without Steadman’s crazed, splattered cartoons.

Roughly 100 of Steadman’s best drawings will be shown at Ralph Steadman: A Retrospective, opening on 6 November at the Haight Street Art Center in San Francisco.

Never-before-seen letters between Thompson and Steadman are on view, offering a behind-the-scenes look at their friendship, alongside the artist’s portraits of Muhammad Ali, the Rolling Stones and Walter White.

“I didn’t like the idea of cartoons as just funny jokes, they had to have some relevant piece of observation in them to do with the society we are living in,” said Steadman. “It’s more interesting if art refers to the world around you, or current events, that’s what I was trying to do.”

Strangely, Steadman’s drawing of the Kentucky Derby was recently returned to him – anonymously. “It was extraordinary that someone just mailed it back and wrote: ‘I’ve had this for long enough, I think you should have it back,’” said Steadman. “It didn’t come with any address, it’s the only original from that period I have.” 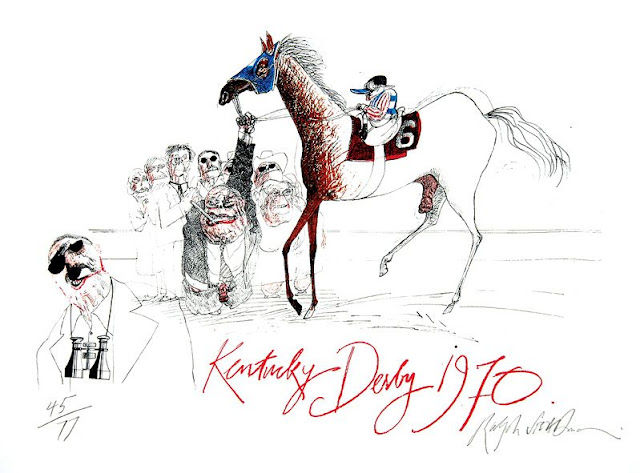 Steadman is widely recognized for his political cartoons, which range from portraits of former presidents Richard Nixon as a vulture to George Bush as a monkey. The exhibition also features a portrait of Donald Trump from 2015, showing him as a pig in diapers. 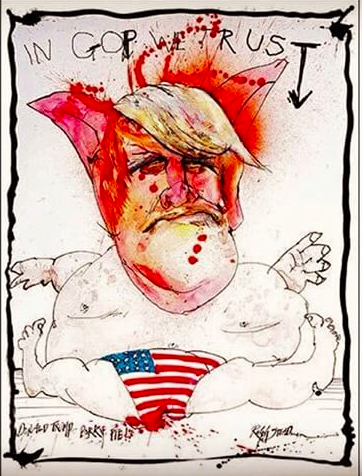 “I prefer Nixon to Trump. I think anybody would because Nixon was at least a politician,” said Steadman. “A proper or improper one, doesn’t matter. Trump just isn’t, Trump is a lout. He’s a godawful disgrace to humanity, really.”

In his book, Between the Eyes, Steadman wrote about the need for optimism. “We live in a time when the world needs a powerful injection of hope and personal achievement,” he wrote. “Nothing cynical will serve our purpose now.”

Today, he feels the same way. “It has brought out the #MeToo generation, hasn’t it?” asks Steadman. “In general, people are more conscious of other people. It’s more of a world of universal acknowledgment. We’re actually there.”

In terms of gonzo journalism, it was more than just dressing up reality to make it more entertaining. As Thompson once said: “Absolute truth is a very rare and dangerous commodity in the context of professional journalism.”

To Steadman, the same can be said of satirical images. “The only thing of value is the thing you cannot say,” he said. “The drawings, the distortion, is probably an emphasis of a characteristic of something I’ve drawn.”

The artist, who grew up in Abergele, north Wales, studied art in London, then began publishing cartoons in Private Eye magazine during the “satire boom” of the 1960s.

“I just had the idea that I thought I was going to change the world,” recalls Steadman of his early work. “It’s worse now than it was when I started. It changed.”

Steadman has always looked up to the British artists William Hogarth and James Gillray for their ballsy social satire. “I admired their way of going about their work, to show people what they were trying to express in the most graphic way to do it,” said Steadman. “That’s the way to do it.”

He has also turned to modernist artists Otto Dix, Max Beckmann and Marcel Duchamp for inspiration, as well as Francis Bacon. “Bacon’s paintings are usually searches for something, usually a scream, a shout of some kind,” said Steadman. “You wonder what they’re screaming about, it’s a silent scream but still effective.”

Another long-lost artwork in the exhibition is a drawing of Ali from 1974, when Steadman and Thompson flew to Kinshasa to cover a boxing match for Rolling Stone. After Thompson sold their tickets for marijuana, Steadman made drawings based on the televised match he watched from his hotel room. 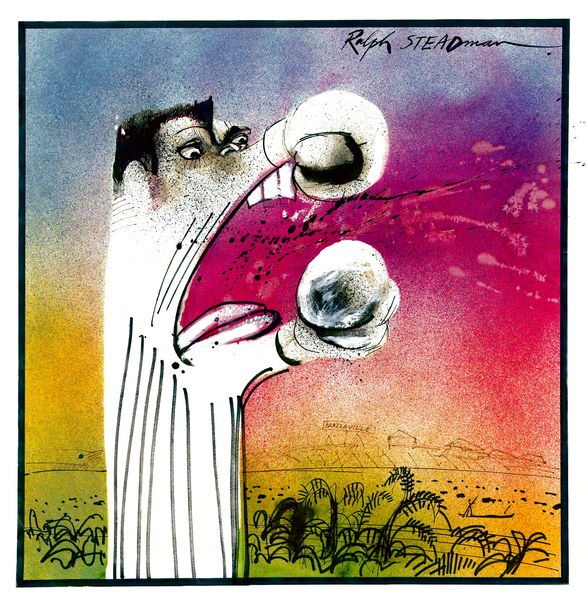 The story never made it to print and the artwork went missing for over 30 years, but was rediscovered after Norman Scott, a former intern for Fantasy Records, died last year. Steadman bought the piece back and it will be on display in the retrospective.

This sort of messy adventure captures the gonzo spirit, which lives long after Thompson’s death. Steadman recalls going with Thompson to a funeral parlor in Los Angeles, “to discuss Hunter’s memorial, imagine doing that”, said Steadman. “He was only in his 30s then.

“The funeral guy took him seriously because Hunter was generally serious about it,” he recalls. “He wanted to get it in order, in case he got so crazy he wouldn’t be in a fit state to organize things.”

Thompson killed himself with a self-inflicted gunshot wound to the head in 2005. “Hunter said years ago to me: ‘I’d feel real trapped in this life, Ralph, if I didn’t know I could commit suicide at any moment,’” said Steadman. “The bullet is still in the cooker hood in his kitchen. But anyway.”

Steadman is primarily known for his expressive use of ink, as he begins every drawing with a “splat” on paper. But unlike Jackson Pollock’s expressionistic abstraction, Steadman turns each splatter into a portrait or realistic scene, of some sort – whether it’s a rabbit from Alice in Wonderland or a creepy Mickey Mouse from Disneyland. 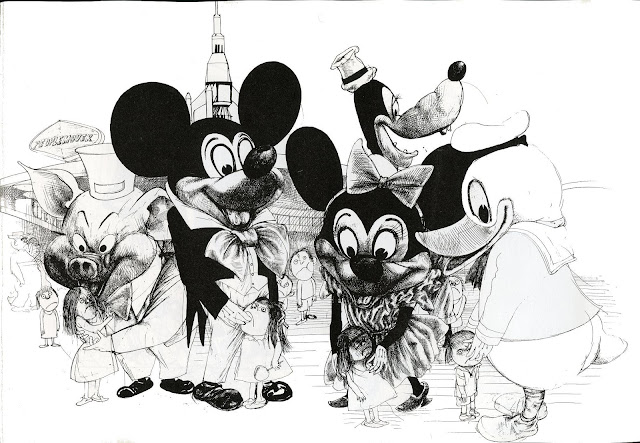 Steadman has stuck with ink, a sometimes unexpected substance, for his entire career. Rather than applying ink directly from a canister in a neat and tidy way, the artist mixes it up and lets it sit in a container for weeks.

“It begins to smell a little,” said Steadman. “Dirty, smelly water is the best for creating texture and interesting things that happen by chance – the chance gives you the opportunity to do something you never thought about. I find it interesting that you’re allowing the forces in nature to do their own thing. I like the wet ink, it takes on an unexpected life of its own.”

While open about his thoughts on Trump, Steadman is reluctant to talk about Brexit. “Oh God, please no,” he said when asked his opinion. “I hoped it would disappear in some form.” 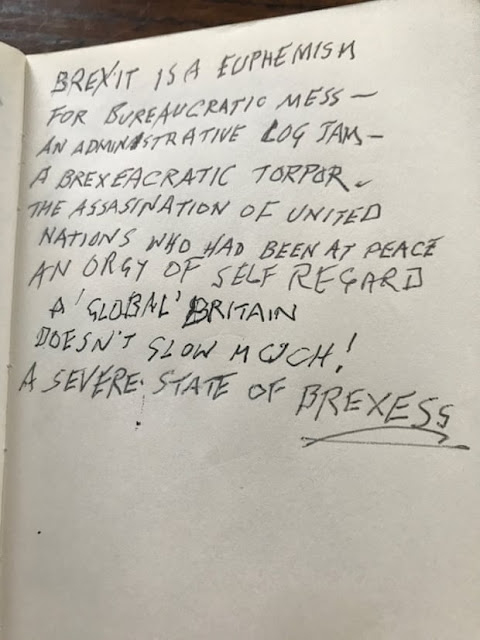 Instead, he offers up a Brexit poem, rather than a drawing, to trace his thoughts, penned in his sketchbook: “Brexit is a euphemism for bureaucratic mess – an administrative log jam, a bureaucratic torpor,” he writes. “A severe state of BREXESS.”

Even in his later years, Steadman is still getting into trouble as any gonzo journalist would. The Flying Dog Brewery, who he has designed beer labels for, is under scrutiny from booze watchdogs who claim Steadman’s sketch of a bleary-eyed pig encourages irresponsible consumption.

He shrugs it off. In his own freewheeling, sometimes cavalier approach, is the essence of gonzo journalism. “Imagine there are no rules, just do something that is done on impulse, absolutely,” he said. “And you’d be doing it from the heart then, wouldn’t you?”