Sexist cartoons in the Post-Gazette draw ire from Pittsburghers

From the Pittsburgh City Paper. 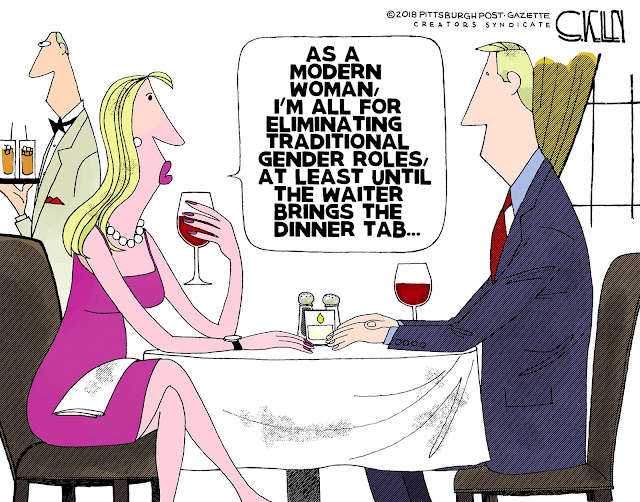 The P-G fired its last cartoonist because they "wanted clever and funny instead of angry and mean.”

This week, Pittsburgh readers looking for some biting satire and political laughs in the Pittsburgh Post-Gazette were treated to some tone-deaf sexism instead.

The first was printed on Jan. 13 and depicts a straight couple at a fancy dinner. The woman says “As a modern woman, I'm all for eliminating traditional gender roles, at least until the waiter brings the dinner tab …”

The apparent joke is attempting to accuse feminists of being hypocritical for not wanting to pay for dinner on dates. The cartoon operates on a stereotype that studies show is false.

Of course, the cartoon was apropos of no recent news event, so readers will just have to guess what it was attempting to skewer. Even so, Pittsburgh's readers weren’t pleased.

Another Twitter user called the cartoon a “tone-deaf piece of shit.” And others called it old and tired.

P-G editorial director Keith Burris did not respond to comment for this story.

The next day, the paper printed another sexist cartoon. 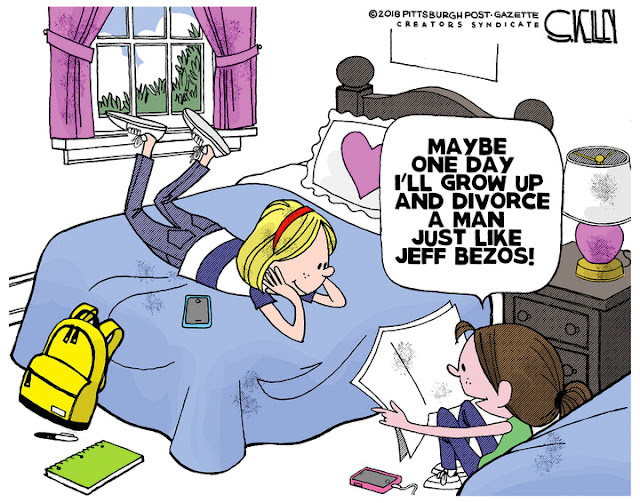 On Jan. 14, the Kelley cartoon depicted two young girls sitting in a room, with one reading a newspaper, then exclaiming “Maybe one day I’ll grow up and divorce a man like Jeff Bezos!”

Readers condemned this cartoon for being “sexist” and “misogynistic.”

And as City Paper’s editor Lisa Cunningham points out on Twitter, the cartoon is so out of touch they can’t even depict the little details of modern reality correctly.

In the cartoon about Bezos’ divorce, the two young girls are ignoring their phones and reading the story on a print newspaper.

Kelley replaced former P-G cartoonist Rob Rogers when he was fired in 2018.

Rogers claimed he was fired for criticizing decisions to pull his cartoons about President Donald Trump.

P-G publisher John Robinson Block said in Politico that Rogers was fired for “a lack of diversity of subjects.”

“I wanted clever and funny instead of angry and mean,” Block told Politico in June 2018.