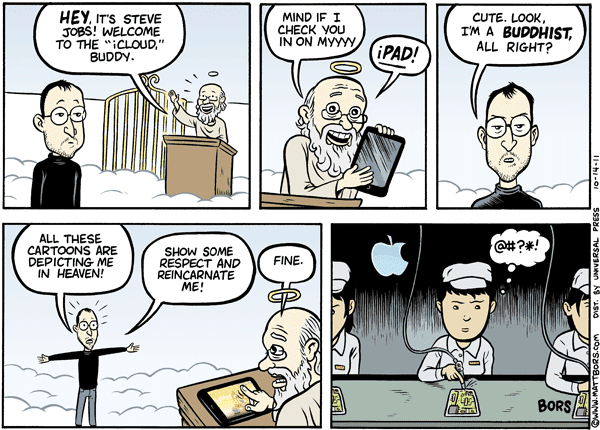 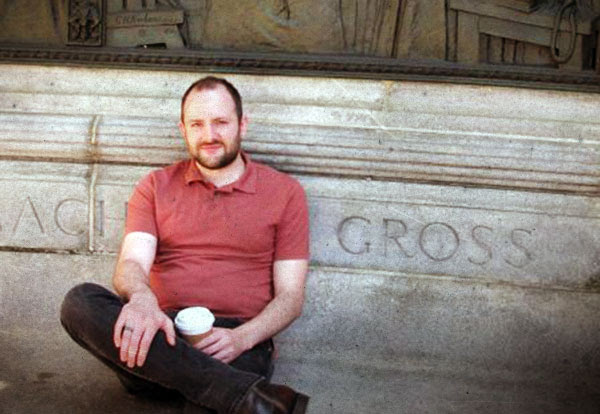 The 28-year-old Bors was thus a bit surprised this year, and occasionally nonplussed, when he won the Herblock Prize for "excellence in editorial cartooning," was a finalist (with Oregonian newspaper staffer Jack Ohman) for the Pulitzer Prize, and received a Society of Professional Journalists' Sigma Delta Chi Award.

Jesus Christ, Matt, when did you fucking sell out?

He didn't. The establishment came to him after a stellar run of cartoons in 2011, in which he sent up the pope, climate deniers, Ariana Huffington, the death of newspapers, Mitt Romney, marriage inequality, and our Kenyan-born, American-citizen killing, war-loving, extrajudicial president (who we love dearly and are praying, to all our gods and Richard Dawkins, gets re-elected). His style is more in the mold of the daily strip cartoonist, like aDoonesbury, common among alt political artists, and that makes it seem benign even while he jabs out with wounding satire. Bors doesn't hesitate to switch from jokes or bitter irony to a documentary strip, such as one about Portland residents, his trip to Haiti in 2011 (he went with two other cartoonists, unembedded, to Afghanistan in 2010), or insights from his work as an editor at the Cartoon Movement site.

His most significant strip in 2011 arose from a mild disgust at the imaginative limitations of most cartoons following the death of Steve Jobs. Countless panels showed Jobs at the pearly gates with St. Peter holding an iPad. Bors response was a five-panel outing in which St. Peter welcomes him to the "iCloud" and whips out an iPad. Jobs notes flatly that he's a Buddhist, and wants some respect. So St. Peter swipes a gesture on the iPad, and the final panel has the reincarnated Apple chief as a Chinese Foxconn worker.

The Herbert Block Foundation called out the Jobs cartoon in its award citation. The prize came with a hefty trophy and a $15,000 (after taxes) check, an awards ceremony at which Doonesbury's Garry Trudeau delivered a lecture on his career, and a fancy reception in a gloriously decorated room at the Library of Congress's Jefferson Building. Bors was the first alt cartoonist to get the award, given since 2004, although fellow online scribbler Matt Wuerker of Politico (this year's Pulitzer recipient) got the nod in 2010. Matt's co-Portlandian and friend, Jen Sorensen (Slowpoke Comics), was named the finalist for the award, and received a post-tax $5,000. She, too, appears in weeklies and online, but was unable to attend.

It might seem peculiar for a foundation associated with the Washington Post's long-running cartoonist to bestow accolades on someone so far outside the tradition set by the Post and other papers. But the Post's editorialist didn't dispense pabulum. Herbert Block was a demon with a paycheck, back in the day that newspapers remembered people might purchase their fishwrappers specifically for strong opinion presented graphically. He advocated against racism, coined the term "McCarthyism", railed against Nixon, and showed the Supreme Court stealing the Bush-Gore election. Block, active for 72 years, produced 14,000 cartoons for the Post, from 1946 until his death in 2001. Bors and Block actually have a lot in common, despite form (Block used the convention of labeling items in a cartoon with terms like "the economy" and "middle-class voters") and source of income. The truth is there to be told in a way that forces people to cope with its reality, whether in Herblock's or Bors' distinctive style.

Matt is a Twitter buddy, and he even adapted a cartoon (with permission and credit) from one of my tweets ("U.S. out of lady parts"). That's an honor of the highest order. After the Jobs cartoon appeared, I immediately asked Bors if I could buy it; it's sitting in a flat mailer behind me waiting to be framed. When the news came out that Matt had won the Herblock Award, I felt compelled to go as a long-time cartoon fan, and a supporter of his. Despite my living in Seattle and he in Portland, we met in D.C. for the first time, not unusual in our fast-paced 21st century hovercar and jetpack lifestyle. (I had some interviews and tourism to conduct in D.C., too, so the timing made sense.)

The audience at the awards was mostly gray to very gray, with a few people dressed in a fashion that made it clear that they were cartoonists (nice hat, Cavna), and not, say, the founding chairman of the Kennedy Center (also in attendance). The audience laughed long and loud at Matt's jokes, save one at Huffington Post's expense. Matt noted that Politico had won this year's Pulitzer for editorial cartooning by his colleague Wuerker, and the Huffington Post had received a Pulitzer for reprinting Wuerker's cartoons without permission. That provoked low, throaty, growly laughter. In deference to the audience, Matt told me he cut a joke about thanking the vagina haters for providing so much material, being assured that it wouldn't go over well. His talk was captured on video and is already online. (Trudeau's amusing and informative talk is also up; it has nothing to do with Matt, as Trudeau recounts the history of his strip. Make sure and watch Trudeau's answer about Wounded Warriors at the end if you want to see where his passion lies.)

Herbert Block's foundation is run by his old pals, and Matt said over coffee the night after the award that he was told openly and politely by board members that they really didn't know his stuff, although the board is passionate about strong opinion and social issues. But the foundation is smart, and picks contemporary peers that know the lay of the land. (Last year's Herblock Award winner Tom Toles was on the panel, along with the Philadelphia Daily News's Pulitzer-prize winning Signe Wilkinson, and Jenny Robb, a cartoon collection curator from Ohio State University.)

Political cartoons haven't gone out of style, but the ability to make a living while creating them has largely eroded in this country. As Matt noted in his speech, dictatorships don't crush people's hands because the cartoons they drew have no impact. But the high-profit-margin structure that allowed newspapers both the funds and the independence to compete to hire editorial cartoonists is now long past. Matt is on the board of the editorial cartoonists' association, and tells me that at the peak of opinion comics, at least 1,000 illustrators were employed in the U.S.; the number might even have been as high as 2,000. There are now 60 full-time staffers in that role.

Both the alt-weekly comic artists and their mainstream comrades have been looking for a path out of the darkness. Web sites, besides Politico, don't have regular cartoonists. Matt is one of several artists now syndicated at Daily Kos, where Dan Perkins ("Tom Tomorrow" of This Modern World) edits, appears, and gathers Matt, Wuerker, Sorensen, friend of Boing Boing's Ruben Bolling ("Tom the Dancing Bug"), and others. But all of them complain that editorial sites that commission original print work seem to forget about the popularity of political cartooning.

Matt estimates his Jobs cartoon was viewed hundreds of thousands of times, with many of those even at his own Web site. Editorial cartoonists know how to create memes and the power in images that lampoon the mighty. The disconnect between the audience for such work and the organizations that could fund it seems huge. I congratulate Matt on receiving recognition for his craft, but he and his colleagues know all too well that the hard work of figuring out how to keep at it continues, every day.

Here's his speech. At the Herblock Foundation site, you can watch the video or just read the transcript instead, and you can also see his winning portfolio.