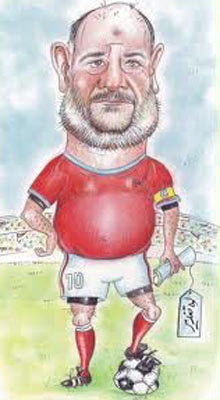 Cartoonists have condemned the conviction of an Iranian colleague sentenced to 25 lashes for drawing a caricature of an MP that was deemed insulting.
Mahmoud Shokraye was put on trial after an Iranian MP, Ahmad Lotfi Ashtiani, took offence to a cartoon he drew of the parliamentarian in Nameye Amir, a city newspaper in Arak, the capital of Iran's central province of Markazi.
The Ilna semi-official news agency reported that a media law court in Markazi had found Shokraye guilty of insulting the MP, handing down the unprecedented punishment.
In the cartoon, Ashtiani is depicted in a football stadium, dressed as a footballer, with a congratulatory letter in one hand and his foot resting on the ball. The MP's forehead has a dark mark, said to be the sign of a pious Shia Muslim, caused (supposedly) by frequent prostration during prayer. The cartoon contains little exaggeration and Ashtiani's forehead has a prayer mark in reality.
Shokraye drew Ashtiani following widespread criticism in Iranian society towards a number of politicians who have been accused of interfering in the country's sports.
His sentence has sparked an outcry among cartoonists, with some calling on their colleagues to draw new caricatures of the MP in condemnation of the court's decision. Iran's online community has taken to social networking websites such as Twitter and Facebook to express anger.
Guardian cartoonist Martin Rowson has contributed his own new cartoonof Ashtiani in protest.
"The sentence of 25 lashes is outrageous, appalling and barbaric," said Rowson. "The surest mark of a healthy society is the degree to which public figures accept the right of everyone else to laugh at them, something which cartoonists and caricaturists have helped enable for centuries.

"So Ashtiani's response to Mahmoud Shokraye's cartoon of him is a far greater indictment of him and his character than any cartoon could ever be."
Jo Glanville, the editor of the campaigning group Index on Censorship, said: "This is a new low for freedom of expression in Iran, making any legitimate comment or criticism of politicians impossible – never mind satirical comment."
Despite the outcry, not everyone is angry with the sentence. Speaking to an Iranian journalist, Esmail Kowsari, a member of the parliamentary committee on national security, defended the sentence: "[A cartoonist] should be persecuted if the cartoon is not ordinary and ridicules someone … Any crime has its own punishment, including lashing, imprisonment or being fined."
It is the first time a lashing sentence has been handed down over a cartoon in Iran, although many have fallen victim to the state's aggression towards cartoonists. Nikahang Kowsar fell foul of the authorities for portraying a prominent cleric as a crocodile. The cleric soon became known as Ayatollah Temsah (Ayatollah crocodile) among his opponents. Kowsar was briefly imprisoned and later fled the country.

Guardian reporter Saeed Kamali Dehghan, who has provided the most details on the Iranian cartoonist sentenced to 25 lashes for depicting a local Prime Minister in a soccer jersey, is now reporting that the sentence against cartoonist Mahmoud Shokraye will most likely be quashed after the MP withdrew his complaint after international outcry.
From the Guardian:

In a statement, Ashtiani attempted to exonerate himself by blaming the court for the sentence of lashing, saying he merely sued the publication for defamation but the court, instead, condemned the cartoonist.
“Following my complaint against [Nameye] Amir for a series of unjust allegations, the court sentenced the paper’s cartoonist to 25 lashes,” he said in quotes carried by Fars. “I did so in protest at using unethical ways to make unjust allegations, therefore I hereby withdraw my complaint against this artist.”