Jimmy Margulies laid off from The Record (NJ) 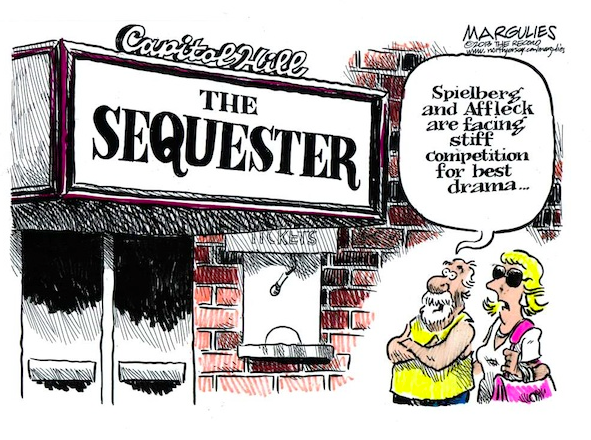 After 22 years as the editorial cartooning voice of The Record (NJ), Jimmy Margulies was laid off last week.
In what has become a tradition when a staff cartoonist loses his job, Alan Gardner presents the exit interview.

When we talked in December you indicated that things were stable at the paper. How much notice were given that your job was in jeopardy? and is this a case of a buy-out or a lay-off?

JM: I was given no advance notice that I was going to lose my job. When I arrived at work on Thursday, the editorial page editor, my supervisor, told me we had to go to Human Resources to meet with the editor-in-chief. So I realized that this was going to be the way they tell you your job is eliminated, even before they actually said the words. I was laid off. But earlier in February, the company did offer buyouts to those over 60 with 15 or more years of service, so I was one of those. I was not interested in leaving at that point. The buyout offer was due to some unfavorable revenue projections, and they also mentioned that other measures, including layoffs might occur.

I was given the same severance that was offered to those taking buyouts, plus I will get unemployment since I did not leave voluntarily.

Will you still be drawing for the paper in any capacity?

At the meeting where I was told about losing my job, I asked about continuing to do some work for the paper. What we worked out is for me to do a Sunday cartoon,primarily on a New Jersey topic, plus if something big happens they might want a cartoon on that too.

What stands out in your career and what will you miss most?

The things that stand out in my career are having won some national awards (National Headliner Award, Fischetti Editorial Cartoon Competition, Berryman Award, and 4 Clarion Awards from the Association for Women in Communications) plus having a former acting governor, Donald DiFrancesco, hold up one of my cartoons as partial blame when he decided to withdraw from running for governor back in 2001. I will miss the idea of my work appearing in a regular spot six days a week in the same publication.


You’re syndicated through King Features. Will that continue?

Yes, I do plan to continue drawing syndicated cartoons for King Features. And I was also self syndicating cartoons on New Jersey issues to papers around the state, which I also want to continue. I am in the process of acquiring the technology I need to work at home in order to resume both of those.

Were you able to keep your originals?

I was able to keep my originals. Most of them I had been storing at home anyway since the company moved to smaller quarters four years ago. So all I had to remove was the most recent year or two.

Have you had time to formulate what your plans are now – near term and long term?

My plans are to continue drawing editorial cartoons as I previously mentioned. And also to look for ways to bring in more income such as freelance, drawing caricatures, speaking engagements, etc…. things I have been doing all along. I also might want to do inking or letter for a comic strip, perhaps look into teaching, depending on how well I do in other areas. I also got a call out of the blue offering me some editorial cartoon work, which is still too early to reveal the details of. But I am hoping this will be something good.

Is there anything you’d like to add, or say?

While I was luckier than some of my editorial cartoon colleagues as far as being able to hang onto a staff job longer than some, I do not see how stripping the newspaper of popular features will solve the long term problems of the industry, or specifically my old paper. It makes the bottom line look better for the paper, but readers are cheated of a feature they have been accustomed to looking for every day. It was very gratifying to receive the support of some of my newspaper colleagues in bemoaning my loss, as well as the remarks which I have seen on social media which have criticized my being let go.

P.S. Jim can be reached at JimMarg@aol.com

When news hit that editorial cartoonist Jimmy Margulies was laid off from The Record, Jimmy told me someone had reached out to him with a possible opportunity. Jimmy now tells me some of those details. He’ll be doing two cartoons a week, mostly about New York City issues, for am New York – a free local Monday-Friday tabloid published by Newsday.
Published by Bado at 6:06 AM