In the days following the announcement of the World Press Photo of the Year there's been quite a discussion going on in cyberspace about post-processing of news images, and how far is too far given the ethics of reportage and today's digital photography.


There are two interesting points of view to consider today in light of this ongoing discussion. First, Allen Murabayashi has published a commentary on Petapixel asking, "Why do photo contest winners look like movie posters?" Murabayashi shows examples of photographs and makes us wonder whether Photoshop has been used to open up faces, change color and white balance, or apply post-processing vignetting.

"When images cease to look real and to be overly retouched, we have a veracity problem," Murabayashi wrote. "And if we subscribe to the common ethos of photojournalism (i.e. that we are trying not to deceive the viewer), then we have an increasingly enigmatic issue."

But the Twitter link that really caught my attention this morning one to a Flickr page by André Gunthert which shows Paul Hansen's photograph as it was published by his Swedish newspaper, Dagens Nyheter, on November 11, 2012, during the photograph's live news cycle. Gunthert has published a side-by-side comparison of the newspaper's original published image along with the one that earned top honors in World Press Photo's contest.

Unfortunately, I'm old. I've been around Photoshop for a long, long time. When I worked in Silicon Valley ten years ago at CNET Networks I got to meet some of the people at Adobe whose names appear on the Photoshop launch screen. The software has come a long, long way since the early versions. So when I look at these side-by-side files on Flickr, my eyes are drawn to the faces of the six men left-to-right across the image; to the white balance of the shrouds on the bodies of the two children; to the light and range of light on the victims' faces; to the hazy background that exists just over the heads of the procession; and to the density of the sky and the variations in the shadows on the upper left wall (in the photograph's "11 o'clock" position).

Examine the photograph at these described areas and decide for yourself what you think may be taking place in these compositional points. Is this much-ado about nothing, or is there something here that can be used as a "teaching moment" and is there an issue that the industry needs to discuss?

The decision regarding post-processing boundaries is in the hands of the editors who decide what to publish in their newspapers and magazines and Web sites, and in the hands of the judges who pick winning images in contests, and in the crowd-sourcing voice of the world's photojournalists who by speaking out, or by staying silent, self-police the industry by voicing what's okay and what's too far.

The fact that we're having this discussion again must mean that some people think there's a problem. From what I hear and read, it sounds like many are about 50/50 on the issue today. And the particular image being discussed has just taken top honors in two very prestigious contests that were judged and chaired by some of our industry's most ethical and admired professionals. So as I think about this issue, I also think about how much I respect their opinions.

In the interest of full disclosure, I'm also bringing this up again because NPPA will shortly begin judging its own Best Of Photojournalism contest. BOP contest chair Terry Eiler and the committee will assemble a panel of expert judges from around the world who are also some of our industry's most ethical and admired professionals. I'm not part of the judging process, and as of today I have no idea who the judges for BOP will be. But I'm glad this discussion is taking place right now, and I'm wondering if this topic will come into play as NPPA's judges look at the Best Of Photojournalism entries.

Whether one agrees or disagrees on this topic of post-processing in photojournalism, by all means let's hope that this discussion continues. If the contest winners are a signal to young photojournalists about what's okay in image presentation and post-processing manipulation, then shouldn't the picture that's entered in a contest be the same image that was published by its editors? It turns out that the 2013 World Press Photo of the Year — the largest and most prestigious press photography award — was, in actual fact, a fake. The World Press Photo association hasn’t yet stripped the photographer, Paul Hansen, of the title, but presumably it’s just a matter of time. Rather than discussing the politics of photo manipulation, though — is it faked, or is it merely enhanced? — we’re going to look at how Hansen managed to trick a panel of experienced judges with his shooping skillz, and how a seasoned computer scientist spotted the fraudulent forgery from a mile off.

The photo, dubbed Gaza Burial, was purportedly captured on November 20, 2012 by Paul Hansen. Hansen was in Gaza City when Israeli forces retaliated in response to rocket fire from Palestinian rocket fire. The photo shows two of the casualties of the Israeli attack, carried to their funeral by their uncles. Now, the event itself isn’t a fake — there are lots of other photos online that show the children being carried through the streets of Gaza — but the photo itself is almost certainly a composite of three different photos, with various regions spliced together from each of the images, and then further manipulation to illuminate the mourners’ faces.

This revelation comes from Neal Krawetz, a forensic image analyst. There were two main stages to the analysis: First an interrogation of the JPEG’s XMP block, which details the file’s Photoshop save history, and then pixel-level error level analysis (ELA). To begin with, the XMP data shows that the original, base image was converted from Raw format and opened in Photoshop on November 20, 2012 (the same date that it was taken). Then, on January 4, 2013, the XMP block shows that a second Raw image was opened and added to the original. An hour later, a third image was spliced in. Finally, 30 minutes later the photo chimera was actually saved to disk. The January 4 date is interesting because it shows that the final photo was only edited a couple of weeks before the January 17 submission deadline, not soon after original photo was taken in Gaza — in other words, it was edited specifically for the contest.


The next step is error level analysis. ELA basically compares the error level of pixels that have been modified by the JPEG compression algorithm (low amounts of change), and pixels that have been modified with photo manipulation (higher change). In the image above, which has been subjected to ELA, we see clear markers that are consistent with the photo’s spliced-and-manipulated history. Regions that have only been subjected to normal JPEG compression should have faint red/blue patches, while white patches show areas that have been subject to other forces. The bright white edges are caused by Photoshop’s sharpening algorithm — but the other bright white regions are likely due to extensive manipulation. Take a look at the man on the far left, carrying the child’s feet — his magically, digitally illuminated face is clearly shown on the ELA map. In fact, almost every face in the picture has been brightened, as have the children’s shrouds.

The final nail in the coffin is good ol’ shadow analysis. At the time the photo was taken — 10:40am, in the winter — the sun should be fairly low in the sky. The shadows on the left wall are consistent with a sun location (shown below) that should cast deep, dark shadows on the mourners’ right sides — but, as you can see, those magical light rays seem to be at work again. 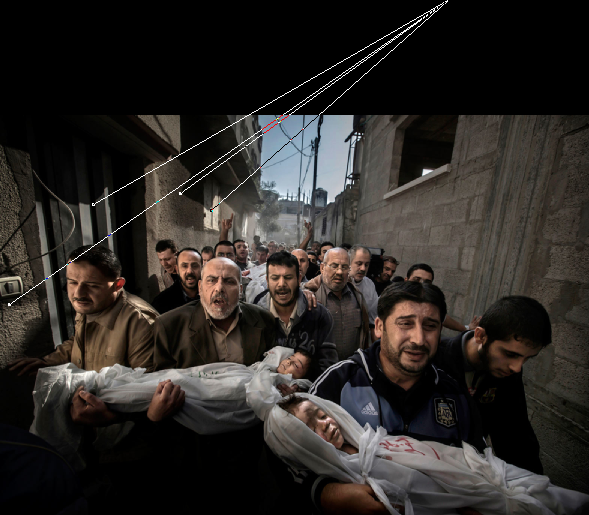 Basically, Hansen took a series of photos — and then later, realizing that his most dramatically situated photo was too dark and shadowy, decided to splice a bunch of images together and apply a liberal amount of dodging (brightening) to the shadowy regions. For what it’s worth, Hansen claims that the light in the alley was natural — and to be fair, sometimes magical lighting does occur. I think most of you will agree, though, that the photo simply feels fake — there’s just something about the lighting that sets off a warning alarm in your brain. As for why World Press Photo didn’t forensically analyze the photo using freely available, advanced, accurate analysis tools such as FourMatch or FotoForensics… who knows.

Oh, I forgot to mention the best bit: Hansen was meant to provide the Raw file for his winning photo, as proof that he didn’t significantly modify the final image — but so far, he hasn’t.

When is an image fake, and when is it merely enhanced?

The bigger discussion, of course, is whether Gaza Burial is actually fake — or just enhanced to bring out important details. This is a question that has plagued photography since its inception. Should a photo, especially a press photo, be purely objective? Most people think the answer is an obvious “yes,” but it’s not quite that simple. What if a photo is perfect, except that it’s taken at an odd angle — can you digitally rotate it? What about cropping? What if there’s dust on the lens/sensor/film — can you digitally remove it?

Perhaps most importantly, though, cameras simply don’t capture the same gamut of color or dynamic range as human eyes — a photo never looks the same as the original image perceived by your brain. Is it okay for a photographer to modify a picture so that it looks exactly how he remembers the scene?
Published by Bado at 3:54 PM

Email ThisBlogThis!Share to TwitterShare to FacebookShare to Pinterest
Tags : Photography