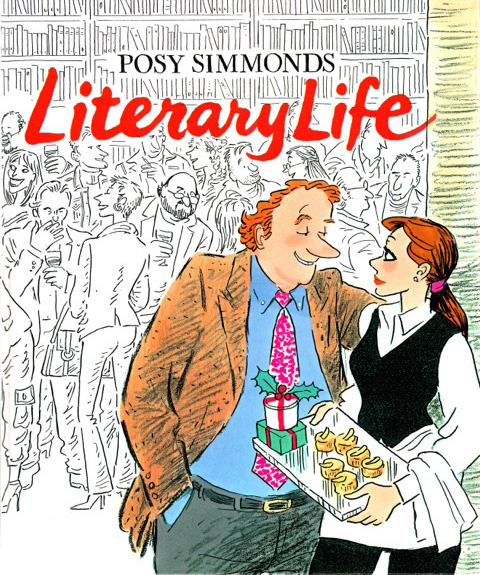 Ten years after its' publication, I discovered this very funny book by Guardian contributor Posy Simmonds. 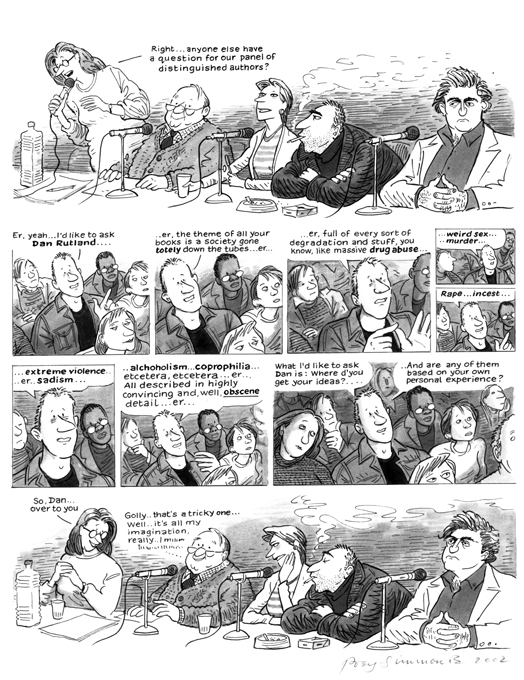 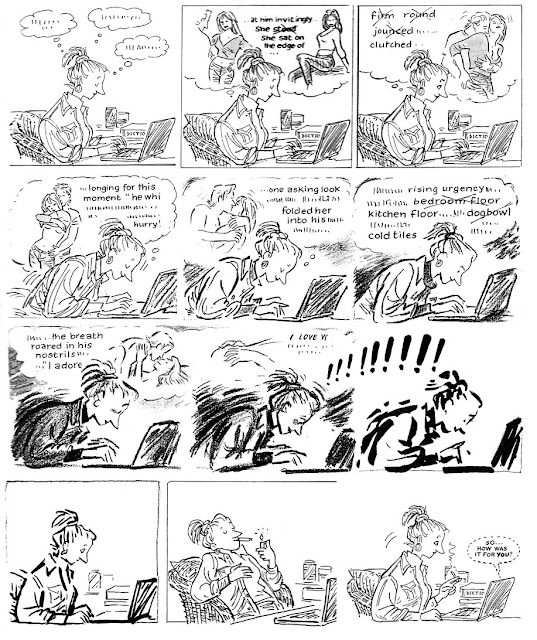 An interview she granted to Stephanie Merritt of The Observer in 2003:


In Posy Simmonds's new book, Literary Life, there is a cartoon in which various children's authors meet the public at a book launch. 'You write children's books? What fun!' the readers exclaim. 'But do you ever do any serious writing?'

Although Simmonds claims not to be exercising personal grievances in her work, it's easy to see this one as close to home. Not only is she the author and illustrator of five successful children's books, but this feeling of being treated as a sub-species is also the lot of the cartoonist. 'People often ask, "Who thinks of your ideas for you?" When you reply that you think of your own, they sometimes say, "Do you do the drawings as well?"'

She relates this in a deadpan tone, but behind it you can see amusement rather than irritation. For nearly 30 years, Simmonds has been a kind of modern-day Jane Austen, gently deflating the pretensions and pomposities of society, in her case, predominantly the self-important media classes. There is a nicely waspish turn to her cartoons, particularly in Literary Life, a collection of the past two years' work from the Guardian's Saturday Review, but in person, she is more mild-mannered than you might expect.

'Contained' is the first word that comes to mind. Petite and impeccably groomed, she shows me down the dark and treacherous basement stairs of her Georgian house in Clerkenwell. Five years ago, on these very same steps, she slipped and broke a vertebra that has left her with permanent back trouble. 'It takes me twice as long to finish a picture now because I have to keep on getting up and walking around.'

Much like her, the studio is also remarkably neat, though the floor is spread with originals of the Literary Life series and the walls lined from floor to ceiling with antique volumes of art history. By the window is her drawing-board and, above it, a mirror, so that she can check the contortions of the human face in the throes of embarrassment, anger and surprise.

Simmonds's distinctive style is concerned with the minutiae of what people say and do, their charms and follies. Even as a child, growing up on a farm in Berkshire with her sister and three brothers, she was aware she possessed acute powers of observation. 'I don't know how or why, but I always remembered exactly what people were wearing, even when I was three or four.'

Cartoons form part of her earliest memories, as the house was full of back issues of Punch, some from the nineteenth century. As a very young girl, she would flick through the pictures until she realised she had taught herself to read. 'I always drew, but whenever I drew something I would automatically add a Punch-style caption underneath, or I'd do a balloon coming out of someone's mouth. In this way, I started drawing comics. One of them was called "How to Turn Yourself Into an Up-To-Date Ted". I was fascinated by teddy boys, mainly because it was the Fifties and everyday clothes were rather drab. I thought they were wonderful. I used to try to sit behind them on the bus.'

After boarding school and a year at the Sorbonne, she went on to the Central School for Art and Design in London, where she first met her husband, graphic designer Richard Hollis. It was here that the Sunday Times cartoonist Mel Calman spot ted her work at her degree show; through him, she was introduced to Jill Tweedie, whose lodger she became, and then went on to work for as an illustrator at the Guardian. 'In those days [the early Seventies], the Guardian was printed on really crappy paper. If you looked at sports photos you couldn't see where the ball was, and if you read it in bed the print came off and went all over the sheets. You had to do the illustrations with a very thick pen.'

Her break came when Peter Preston, then editor, asked if she would like to try her hand at a strip cartoon for the women's page, and she came up with the Webers, the kind of well-meaning, Left-liberal, beard-wearing characters that non- Guardian readers usually have in mind when they use the term ' Guardian-reader'. 'Of course, Guardian readers have changed in recent years,' she says thoughtfully. 'Now they're all wearing Manolo Blahniks.'

She agrees, though, that the essence of her humour is in recognition - her targets and her audience are the same demographic - and this is especially true of Literary Life. A running theme in the book is the creeping corporatisation of what might be described as the culture industries. Several cartoons are set in a small, old-fashioned bookshop and detail the struggles of such places to stay in business; others show older generation publishers and authors bewildered by the commercial pressures of modern publishing.

My favourite is a broad overview of a publishing party, which you can pore over for hours, noting all the details of each guest; in one corner, a rotund, tweedy middle-aged man has stopped one of the young waitresses. 'You know,' he says, 'you're really beautiful - have you ever thought of being a novelist?' (Editor's note: the cartoon is also shown on the book cover)

Simmonds still draws Literary Life each week, though she hates deadlines. She's also waiting to begin work on another big project, one akin to her acclaimed graphic novel, Gemma Bovery, an updating of Flaubert's classic.

'Graphic novels are becoming more popular here, but I think cartoons are still associated with childish things. But in France and Belgium, the graphic novel is a huge phenomenon,' she says. Gemma Bovery received rave reviews and some critics lamented the fact that it was not shortlisted for any major fiction prizes. With another book on the way, it's likely to be Simmonds rather than any of the younger, hipper artists who give the graphic novel a degree of literary acceptance in England. Perhaps people will then stop asking her if she can draw Bart Simpson. 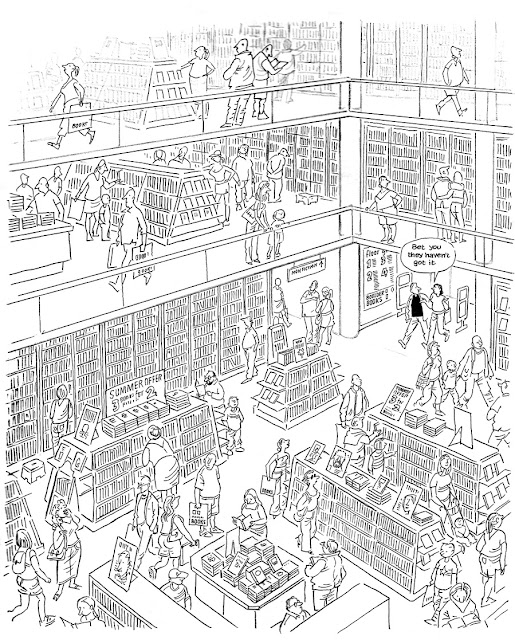