Matt Bors on the 2013 AAEC Convention


I’m still processing the fact that I got drunk with Chuck Asay and debated whether or not Jesus was a communist.

These are the type of things that happen when you gather America’s editorial cartoonists in a hotel for a weekend; Christian fundamentalists mingle with Marxists over local microbrews and respectfully discuss how the other is totally wrong on everything. Except on editors. We’re all correct that they are terrible people for not running us.

This year’s Association of American Editorial Cartoonists convention, held this past weekend, found us in Salt Lake City.

On the first day of the convention a cartoon of mine appeared on the op-ed page of the Salt Lake City Tribune. I was a guest cartoonist in the regular spot of Pat Bagley, who had organized the convention with AAEC president Matt Wuerker. It was a little glimpse of what my daily life would look like if I were employed full time and had a future to look forward to.

Asay had retired from cartooning completely that week. His last cartoon was published on Friday, marking one less number in our ever-thinning ranks. I asked him how he would vent about Planned Parenthood and gays without his cartoons as an outlet. He’d be complaining more to his wife, he said. She laughed nervously. I gave him an idea for a retirement cartoon and he said he would draw it for me.

Steve Benson attended the convention for the first time in years. He works out in Arizona and is crazy. In a good way. He likes to make people uncomfortable, which is a good trait in this business. His past ties interestingly into the history of Salt Lake, being a heretic from a famous Mormon family. He’s an atheist now, who mockingly consults the ghost of his famous dead Mormon grandfather to get laughs in front of crowds.

He presented his work publicly at a local piano bar, where he was a contestant on Cartoonist Death Match (a sanctioned spin off of Literary Death Match) against Signe Wilkinson, Ted Rall, and Lalo Alcaraz. His slide show failed. He gave nonsense answers to the trivia questions. He banged on the keys of a piano until everyone got uncomfortable and started looking at each other.

He won. Then wore the medal on top of his head. A new friend.

The reclusive Pat Oliphant graced us with his presence and a presentation at the Natural History Museum of Utah, followed by an open bar reception on a sun-drenched deck overlooking the city. NHMU’s corridors and walkways have the look of the lair of a Bond villain. It struck me as an excellent location to have uniformed henchmen lower a foe into lava. An editor who canceled my work, perhaps.

On the way in, the remaining political cartoonists in the country all passed through an exhibit of dinosaur bones.

Oliphant must be the most highly revered editorial cartoonist still above ground. He’s still working at 79. Men who are excellent draftsman in their own right were captivated as Oliphant spoke to us, seated, while drawing effortlessly with charcoal on an overhead projector. A man next to me whispered orgasmically, “Oh, Pat” every time his hand swept the first line on a new blank page. A lot of people there started out imitating much of what Oliphant did, a fact that still makes him uncomfortable.

He recounted anecdotes from his long career while drawing the players; presidents and editors he encountered, infamous cartoons, a prize-winning bull with one large set of balls, and a female editor he once had–an “editress” he called her.

Later I bid on a sketch of George W Bush which I secured for $75. A steal.


I asked him about winning the Pulitzer in 1966 and the story I had heard about it, that he contrived to create a cartoon specifically to win, did so, and mentioned that fact to them shortly afterward. Back then you only submitted one cartoon. 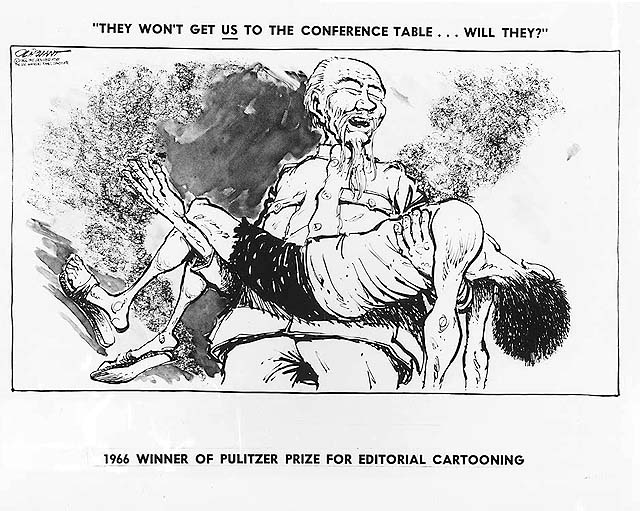 A lot of cartoons shouldn’t have been drawn.

Bill Day arrived from Tennessee. He’s not a member of the organization, but he wanted to address charges of plagiarism that the AAEC had issued a statement about when a cartoon of his came under fire for lifting art someone else had created.

After canceling his speech two days in a row moments before they were scheduled to start, he took to the stage on the last day, sandwiched between a discussion of adding guidelines to the AAEC about plagiarism and re-purposing old work and a presentation on the history of plagiarism. (It turns out Paul Revere was a hack of the highest order.)

Day talked about his upbringing and early jobs he worked in the south. He mentioned a black man he knew in the Civil Rights era who was shot dead by racists, editors who hired him and fired him, and the blue-collar jobs he’s worked over the last few years after losing his staff job. He held up a photo of the large piles of packages he had to sort while working for FedEx. He held up a photo of some children he helps by doing some volunteer work.

Near the end of this speech he ended up mentioning a cartoon he had done, the one where he used an image belonging to someone else but redrew it when he was contacted about it. He said he resents being called lazy over that. The Tumblr showing hundreds of instances of Day re-purposing old cartoons hung in the air, unaddressed. The AAEC is considering adding some official language that discourages that practice. 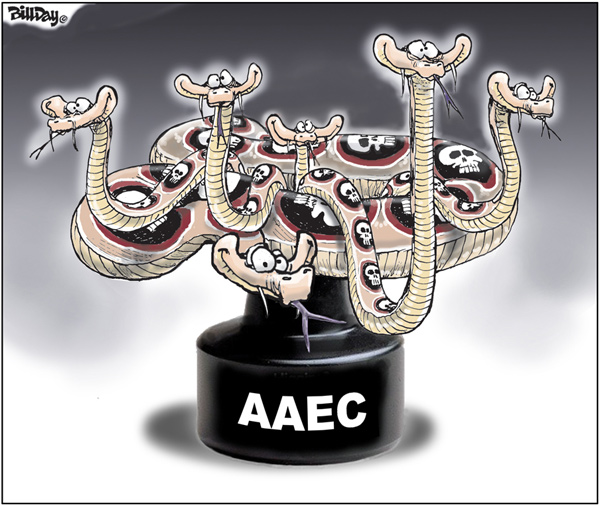 As the youngest viper in our ranks, I know the AAEC is not a growing organization. Next year there will be no members who work full-time in their 20s. There will maybe be five members in their 30s. There may come a time when ten of us just meet up in a bar near someone’s house. Honestly, I’d be fine with that. The best parts are when the drinks and debate flow into the night. I can take or leave a Kickstarter panel.

I’m always energized to do more work coming out of these things. You leave knowing you’re not good enough yet.

I’ve got a lot of friends in this snake pit. They are not nearly as terrible as some of their political views may suggest. Even Chuck Asay. I’m going to keep attending these things until he admits I’m right about everything.
Published by Bado at 4:00 AM