Shannon Clarke in The Ryerson Review of Journalism. 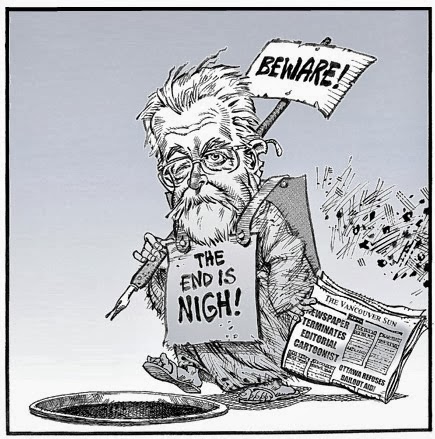 'The company does not love you': the editorial cartoon after Roy Peterson

From his termination at The Vancouver Sun to his role in the community of illustrators, we remember the "Great Cartoonist"

“They’re not going to like this,” thought copy editor Cheryl Parker as she walked Roy Peterson’s last cartoon through The Vancouver Sun newsroom in 2009. The caricature showed Peterson dressed as Father Time, holding a newspaper with the headline “Newspaper terminates editorial cartoonist” and a sign that read, “The End Is Nigh!”

Parker took it to editorial pages editor, Fazil Mihlar, who would decide, along with editor-in-chief, Patricia Graham, to publish it or kill it.


For the first time in 47 years, the Sun rejected one of his cartoons—and Peterson earned his first Golden Spike, the Association of American Editorial Cartoonists’ award for the best rejected editorial cartoon. “He told me he wanted to win it more than any other award,” says Bob Krieger of his friend, who died in September at the age of 77.

Peterson’s pride at winning the Golden Spike was one of the few times a man known for his geniality and subtlety showed bitterness about his exit from the paper. Many cartoonists and journalists across Canada considered it a brutal ending for someone of Peterson’s stature, and prophetic about the state of the industry. “It might’ve been a life lesson for the rest of us,” says Montreal cartoonist Terry Mosher. “You can love the company that you work for all you want but just remember: the company does not love you.”

Born in 1936 in Winnipeg, Peterson developed a gift for drawing early on. His mother signed him up for art classes when he was about six years old. At Kitsilano Secondary School in Vancouver, he was in charge of the cartoons for the school paper and posters for plays and events. Later, while working an extra shift at Woodward’s Department Store, he met Margaret Brand, a friend of a fellow employee. She had a sense of humour, charm to match his own and a thick Scottish accent. Brand became an incredible business partner when Peterson started at the Sun in 1962. She did everything so that he could draw, says cartoonist Kerry Waghorn. “She loved doing it. She was really good at it.”

Everything included checking cutlines, negotiating his contract, delivering his cartoons to the Sun (or to the airport for delivery to publications on the East Coast) and raising their five children to recognize the sanctity of silence—and an available phone line—when deadlines approached. “Without my mom, there would be no Roy Peterson, Great Cartoonist,” says his daughter, Gillian Peterson. “And he knew that.”

In 1978, he began illustrating Allan Fotheringham’s column on the back page of Maclean’s. The partnership (along with regular assignments for publications in the U.S.) helped spread Peterson’s prestige across the continent. For aspiring cartoonists such as Wes Tyrell, president of the Association of Canadian Editorial Cartoonists (ACEC), Peterson’s work was a crucial part of their creative education.

By the end of his career, Peterson had won seven National Newspaper Awards, produced several books, co-founded the ACEC and was one of only two Canadian presidents of its American counterpart. He was invested into the Order of Canada in 2004. His cartoons were detailed, shrewd and insightful—a byproduct of careful observation of people and events. Former Sun columnist and editor Trevor Lautens wrote, “Roy had an uncanny eye for the telling facial characteristic, whether the smirk, the petulance, the arrogance, the unthinking vacant look, that set him apart as a cartoonist.”


Peterson built a devout following of cartoonists, many of whom became close friends. They were often younger artists who’d grown up with his work and introduced themselves expecting nothing more than brief acknowledgement. Yet, a month after receiving a single cartoon from Waghorn, Peterson invited the then-teenaged artist to his office at the Sun for lunch. Soon Waghorn was one of many cartoonists to visit Peterson’s West Vancouver home and studio, even borrowing some of his personal sketchbooks. He eventually landed his first assignment with the Sun on Peterson’s recommendation. Peterson was, wrote Fotheringham in a tribute in Maclean’s, freakishly courteous: “A civil gentlemen in a profession that had so few.”

His network of friends and colleagues supported him after Margaret’s sudden death in 2003 and as his own health declined after he left the Sun. Some flew to Vancouver to see him the summer before his death, when he was too sick to attend ACEC events. “He was a world-class cartoonist,” says Krieger, “but he was a much better person.”

Even the people he eviscerated in his cartoons liked him. It was, says Krieger, his ability to be critical without being mean-spirited that earned him respect from politicians on both sides of the border and across party lines. He drew politicians and interpreted political events with a critical eye because he knew his job was more than just making people laugh. “It was like being immortalized in a Rembrandt,” says Bruce MacKinnon, cartoonist for the Halifax Chronicle Herald. “If you appeared in a Roy Peterson cartoon, you tended to keep that cartoon.”

The number of regular cartoonists in Canada has dwindled along with the number of newspapers. Photography and syndicated work have slowly reduced the demand for the kind of detailed, personal drawing Peterson perfected. Fellow cartoonists and former colleagues at the paper guess that his departure from the Sun came down to money. That year, the paper’s publisher, Canwest, filed for bankruptcy protection and sold its newspaper assets to Postmedia Network.

Graham Harrop, who shared the editorial pages with Peterson for several years before he left, is now the Sun’s only cartoonist. Newsroom managers make budgetary decisions, but the editor would have had to take what she was given and decide how to spend the money, says Harold Munro, current editor at the Sun. (He wasn’t involved in Peterson’s contract negotiations in 2009.) Patricia Graham didn’t respond to interview requests.

The paper didn’t throw Peterson a retirement party so Krieger and Dan Murphy, both cartoonists at Vancouver’s The Province, organized one. Although he told Lautens that he was fired—even if the Sun didn’t see it that way—Peterson rarely talked about leaving the paper. Krieger says, “I think he hoped his work bought him enough good will to end his career on his own terms.”