"Spitting Image: From Start to Finish" 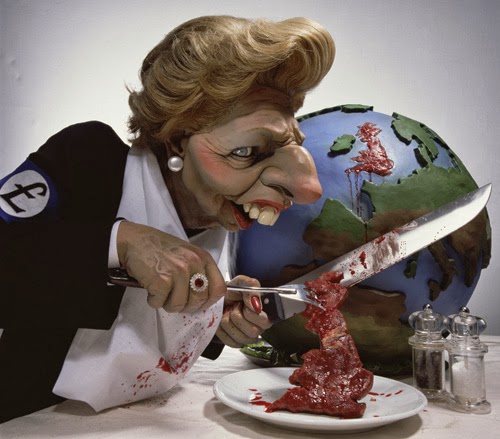 The exhibition Spitting Image: From Start to Finish opens at the Cartoon Museum in London tomorrow (26 February) – 30 years to the day since the TV series burst into our living rooms and put satire back at the heart of British comedy.

The BFI is also joining in the celebrations with an anniversary event and a screening of the BBC Four Arena documentary Whatever Happened To Spitting Image? on Thursday. It will be broadcast in spring.

The anniversary has already prompted a debate on the current state of satire on TV, with the Spitting Image producer John Lloyd and the Private Eye editor Ian Hislop, a former writer for the show, putting forward opposing views.

Thirty years ago, Roger Law and Peter Fluck were happily ensconced in a converted Temperance Hall in Cambridge making cruelly funny plasticine caricatures. These models were photographed and presented to the world in print under the anonymous byline ‘Luck & Flaw.’ Unlike a drawing, the caricatures looked like they might move and, Geppetto-style, they did. Law and Fluck, with co-conspirator, TV comedy supremo John Lloyd, unleashed one of the most shocking and hilarious TV series ever.

A TV satire with a difference, Spitting Image was first broadcast on 26 February 1984 and continued to mercilessly caricature the great and the good of Britain until 1996, using latex puppet created by created by Peter Fluck, Roger Law and Martin Lambie-Nairn.

No politician or celebrity was safe: Margaret Thatcher, Ronald Regan and The Queen to Mick Jagger, Alan Bennett and Arnold Schwarzenegger were all captured in latex for the show, which included scripts from Private Eye editor Ian Hislop, Ben Elton, Red Dwarf co-creator Rob Grant, Richard Curtis and many more – and featured vice work from then unknown performers such as Hugh Dennis, Steve Coogan and Harry Enfield.

Photos of the opening in The Guardian.
Published by Bado at 1:29 PM