Political satire will increasingly be pixelated.

In recent years cartoonists around the globe have faced special challenges. With newspapers downsizing in the West and religious sensitivities growing in the East, it is increasingly hard for a cartoonist to know where to draw the line.

For Sabir Nazar, Pakistan’s most prominent cartoonist, 2015 may, instead, mark the end of the line. Mr Nazar’s sharp, effective commentaries on his country’s unravelling politics in the Friday Times and Express Tribune have drawn a lot of attention. Such attention is not always welcome. Outraged by similar commentaries, extremists have attacked the Express Tribune seven times in the past few years. In one assault, Mr Nazar’s editor was targeted and his driver killed.

With threats mounting, Mr Nazar thinks 2015 will be the year when he starts to draw primarily for an audience outside Pakistan. He wants to avoid the fate of Ali Farzat, a famous Syrian cartoonist who was brutally attacked and had his hands broken by pro-Bashar Assad thugs in 2011. (Mr Farzat escaped to Kuwait and was later honoured with the Sakharov prize for freedom of thought by the European Parliament.)

Mr Nazar plans to rely on social media and blogs as his delivery weapons. In 2015 he will join Mr Farzat and many other cartoonists around the world who have opted to go paperless. They are embracing the web as the primary platform on which to display their work to a rapidly expanding internet audience.


In the United States, Matt Bors is leading the paperless trend. A left-leaning millennial, Mr Bors is widely regarded as one of the best in the field, but he has been unable to secure a job in the traditional home of cartoonists: a metropolitan daily newspaper. More than 60% of cartoonists’ jobs at American national dailies have been shed since 1980. Not surprisingly, job openings are scarce.

But Mr Bors is riding a new wave in the cartoon world. He is an online staff cartoonist. Once notoriously stingy, websites are now putting cartoonists on their payroll.

An online news site in Washington, DC, Politico, started the trend by hiring a Pulitzer prize-winning cartoonist, Matt Wuerker, in 2007. Mr Bors has been hired by a website, Medium, to be its cartoonist and editor of its comics collection, The Nib.

In addition to creating his own nationally syndicated work, Mr Bors now curates a daily collection of commissioned cartoons by others. He is using The Nib to showcase a healthy mix of artists who, like himself, found it hard to get published in the world of traditional newspapers. In the year ahead he will be pro­­viding a welcome source of income and a growing platform for the next generation of comic satirists.

For the current generation of cartoonists in Canada there will be much to draw upon in 2015. A national election will be the highlight of their calendar. Canadian scribblers are some of the best on the planet, offering a toxic mix of British bite and Yankee yucks. Add to the brew a little Québécois quick-wit and you have “Ici Laflaque” the brilliant animated satire show flowing since 2004 (when it was called “Et Dieu créa… Laflaque”, “And God created… Laflaque”) from the pen of a Montreal-based editorial cartoonist, Serge Chapleau. 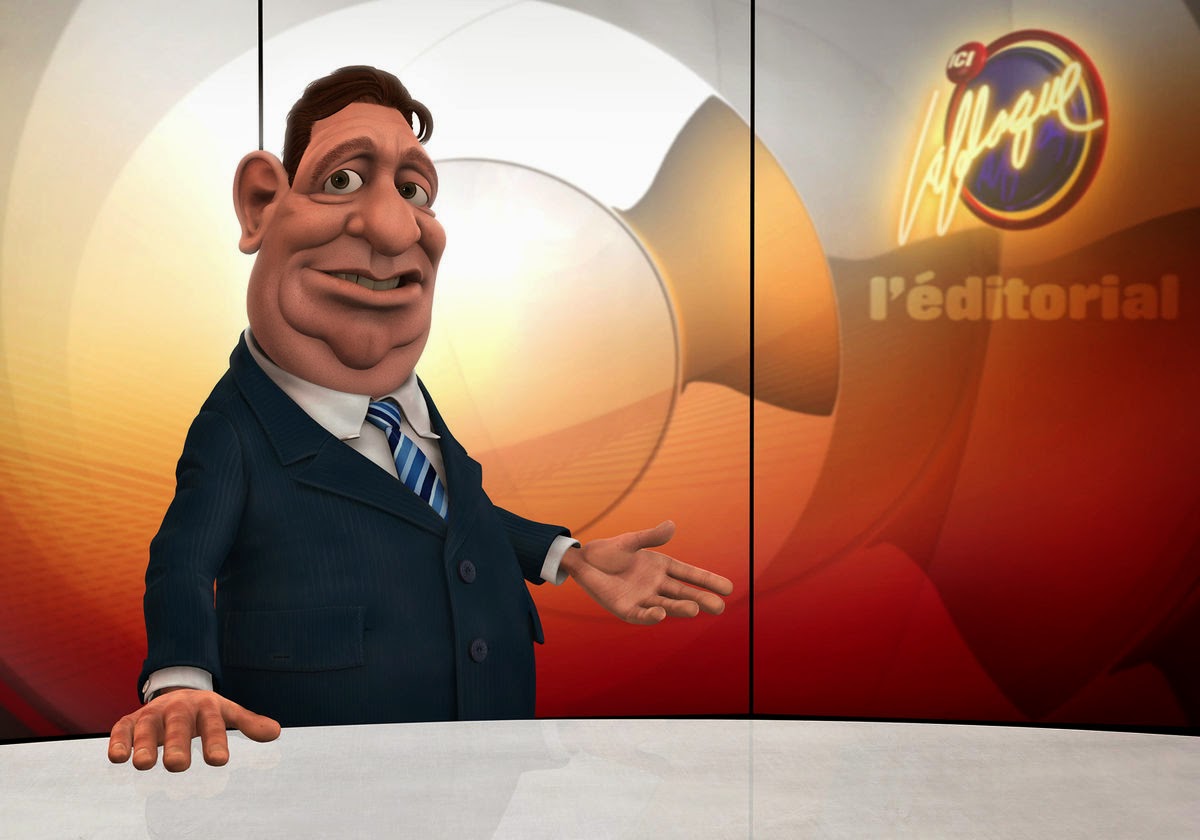 In Laflaque Mr Chapleau has used animated 3d digital caricature puppets of politicians and other personalities to comment on current events in a weekly 30-minute programme on Radio-Canada television. The high-tech show is topical, to the point and cleverly written (in French). It takes the successful concept of the great 1980s British puppet satire “Spitting Image” to a new level. Incorporating advanced motion-capture technology to help create complex cartoons on tight deadlines, Laflaque is a world leader in animated satire. It will be worth watching how Mr Chapleau’s cheeky cartoon creations capture the Canadian campaign in the year ahead.

Until now, cartoonists have long aspired to see their work adorning the pages of the morning newspaper. Although the recent upheaval in the publishing world has crushed those hopes for some, 2015 may mark the start of an era when cartoonists are increasingly drawn not to paper but to pixel.
Published by Bado at 1:46 AM