The Charlie Hebdo cartoons no one is showing you.

From The Daily Kos. 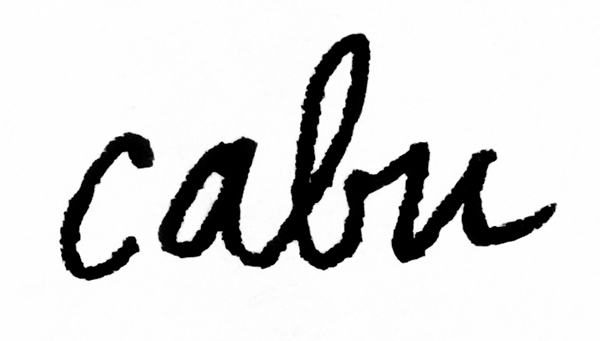 Here are cartoons drawn over the past several decades by Cabu, the most emblematic cartoonists at Charlie Hebdo. Cabu was murdered along with his colleagues this past week. He was 77 years old.
Although no media outlet in the US will show you these images, they can all be found online with a simple Google search.
This cartoon criticizes racial profiling, specifically discrimination by the French police against immigrants from North Africa and people of African descent.
This cartoon depicts and quotes the racist demagogue politician Jean-Marie Le Pen of the Front National party (with the eye patch). The armed thugs in the background are racist skinheads and their ilk. The cartoon leaves little doubt as to who is afraid.
This cartoon depicts young people of color looking at a Christmas display of a toy costume for a CRS, the riot control force of the French National police, which has long been accused of brutality and racism. The critique here is about the normalization of police control and militarization and its negative impact specifically against young people of African descent. 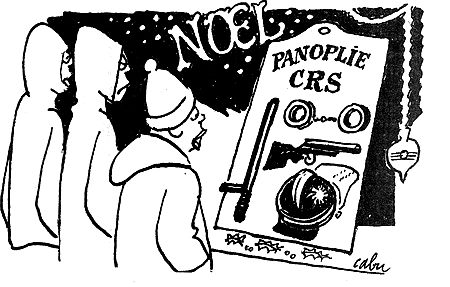 This cartoon meant to raise the alarm at the rise in popularity of far-right, anti-immigrant politician Marine Le Pen and her Front National party (founded by her father, the notorious right-wing racist and xenophobic politician Jean-Marie Le Pen). The captions read on the left "Disappointed by Sarkozysm" and on the right "Disappointed by Hollandism".
This cartoon criticizes the size of the military budgets across Europe. At the top, "Those clowns that suck the blood of Europe," and at bottom, "Let's put the military budgets on a diet!" 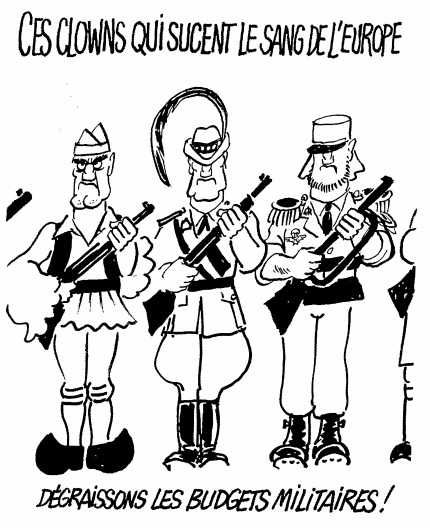 This cartoon was published in 1979 in the antiwar journal L'Union pacifiste. While this specific image might not have been published in Charlie Hebdo (I don't have access to their archives), it strikingly conveys Cabu's lifelong antiwar and anticolonialist politics, which always fit right in at Charlie Hebdo (and were shared by the majority of the journalists and cartoonists there).
Published by Bado at 6:34 PM