"The Hirschfeld Century: The Art of Al Hirschfeld"

From the New-York Historical Society. 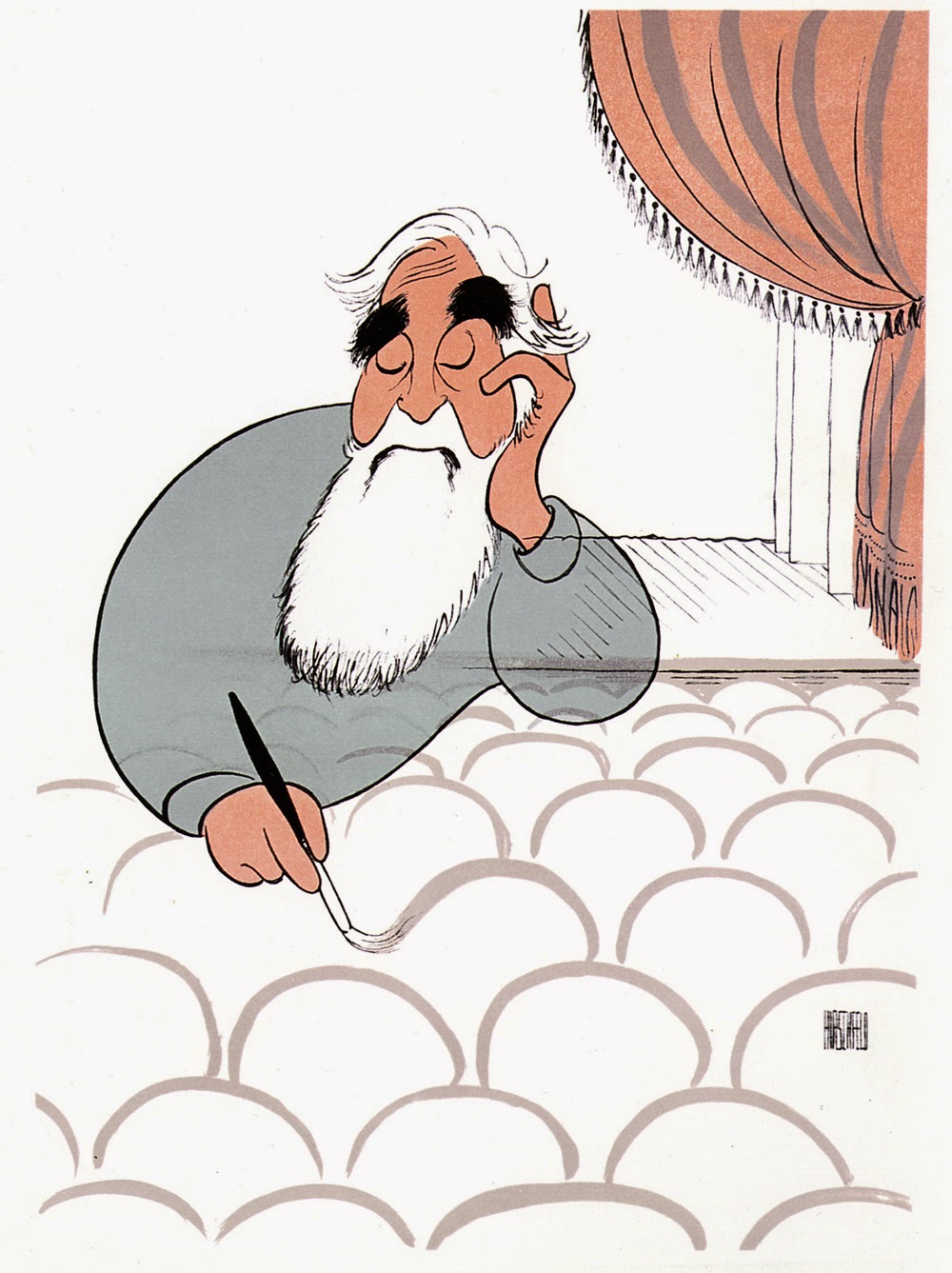 The Hirschfeld Century: The Art of Al Hirschfeld examines his influences, his iconography, and his techniques, from his earliest works to his last drawings. Visitors will have the opportunity to trace this unique artist's evolution by viewing his own body of work, including drawings, paintings, selections from sketchbooks, ephemera, and video. The exhibition is being organized in partnership with the Al Hirschfeld Foundation and is guest-curated by David Leopold, the Foundation's Archivist.

All were captured by Al Hirschfeld's graceful pen-and-ink drawings during an insanely productive seven-decade career that ended with the beloved artist's death in 2003.

But this year — the 100th anniversary of the first Broadway show he ever attended — some Hirschfeld drawings that the public hasn't seen are being revealed.

A new exhibit with 100 original drawings and a new book with 400 images promise to be the most comprehensive collections to date, with many pieces new to even the hardiest of Hirschfeld fans.

The book and exhibit have been put together by David Leopold, Hirschfeld's archivist, and Louise Kerz Hirschfeld, an art historian and the artist's widow. They are the result of sifting through more than 10,000 drawings and sketches.

"It's an impossible task," said Leopold. "I'm biased. I'll be the first to admit it. But there really are too many great drawings."

The exhibit, titled "The Hirschfeld Century: The Art of Al Hirschfeld, runs May 22-Oct. 12 at The New-York Historical Society. It includes classic portraits of Charlie Chaplin, Ella Fitzgerald and Jane Fonda, as well as pages from the artist's sketchbooks, ephemera, and related videos.

The book, published by Alfred A. Knopf, is "The Hirschfeld Century: Portrait of an Artist and His Age," which will be available in bookstores around the country July 7.

"He was the greatest caricaturist of his age but he really didn't do caricature. He did characters," said Leopold. "He saw the humor in life as well as the poignancy. And that comes through in his drawing."

For nearly 70 years, Hirschfeld's theater drawings appeared in the drama pages of The New York Times, and his work appeared from TV Guide to The American Mercury. He drew the Aerosmith album cover "Draw the Line" and a line of U.S. stamps.

Tommy Tune once called him "a dancer with a pen" and Lauren Bacall said he was a "national treasure." Channing said, "There are three things that I know won't lose value — diamonds, gold and Hirschfeld drawings."

Channing has lent some of her "Hello Dolly!" drawings for the exhibit, as have Barbara Walters and Whoopi Goldberg. Some items were found in closets or borrowed from places like Harvard or the Library of Congress.

Hirschfeld was an urbane man with white hair and a Santa Claus beard. For many, their first exposure to his work was as a child looking for the name of his daughter, Nina, hidden in the fluid lines of his drawings.

When it came to the theater, Hirschfeld learned to sketch and make notes in the dark, observing a show from the seats. He'd then work at home in pencil on a 20-by-30-inch board. Once the image was set, he'd ink the image and erase the pencil.

"The Ninas came out organically. He didn't plan them," said Leopold. "He'd have to count them, just like everyone else, at the end."

Hirschfeld wanted his art to have more than topical value. He hoped the image would outlast the show and be able to stand alone. And he didn't want to pass judgment. "He was a visual journalist. He was recording what he saw through a unique set of eyes," said Leopold.

Being captured by Hirschfeld was an honor and owning an original was a sign you'd made it. Even a doodle from the artist sparked heated interest.

Hirschfeld's widow recalled once going out to dinner with her then-husband and Woody Allen and his wife. Al Hirschfeld soon took out a pen and began drawing everyone on the table cloth. When it was time to leave, Allen, the waiter and the owner all desperately wanted it.

"I said, 'Al, we better move outside. This is dangerous,'" she recalled. They waited at the curb until finally Allen came out, triumphantly, with the cloth folded over an arm.