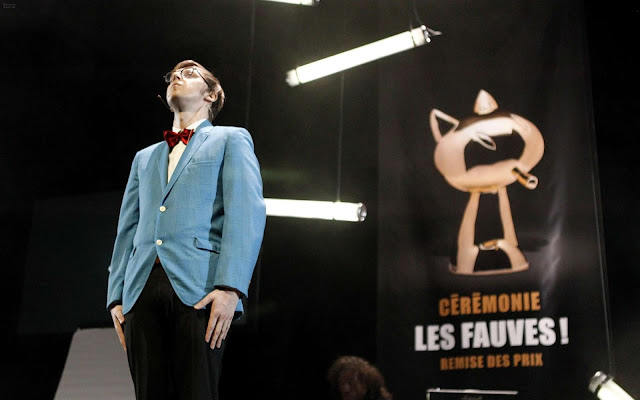 As if this year’s Angouleme International Comics Festival hadn’t been plagued by enough controversy, the organizers decided to play a practical joke at the closing ceremony that a lot of people didn’t find very funny.

The ceremony began with comedian Richard Gaitet, clad in a neon-blue suit and red bow tie, announcing, “This will be the shortest ceremony in history, because all we want to do is drink and dance.”

He proceeded to present nine awards in rapid succession, including the award for best series to Saga, best comic for young people to Aaron Renier’s The Unsinkable Walker Bean, and the Fauve d’Or, the big prize, to Arsène Schrauwen, by Olivier Schrauwen. And then two women appeared and said, “Bravo Richard, for that joke about the false fauves [awards] and the size of the Grand Prix. We laughed a lot, but now we must go.” And then they presented the real awards because that first set? That was fake.

Gaitet has apologized for the hoax, saying that he thought it would just be a silly joke. “My fundamental mistake was failing to grasp the range of expectations and hopes, the strong emotions that reigned in the room on such an occasion,” he said, “nor did I realize the importance of social networks in this context.” He mentioned each of the “Faux Fauves” recipients by name and said “I am sincerely sorry for having hurt the professionals who work very hard to support this major art that I love: Comics. No, it was neither the place nor the time nor the year to try such a trick.”

Making the joke even less funny was the fact that the creators and publishers weren’t forewarned. “We were all happy, we had tears in our eyes, and then we were humiliated,” said Sam Soubigui of Komikku, one of the publishers whose book won a “Faux Fauve.” “Happily, my authors weren’t there, so I didn’t have to explain this shitty French humor to them.”

Patrice Kiloffer, co-founder of the publisher L’Association, said that neither he nor Schrauwen got the joke, and Pol Scorteccia, the French publisher of Saga, had already relayed the news of the false win to writer Brian K. Vaughan and artist Fiona Staples, and then had to backtrack. “We looked like clowns,” he said. ActuaBD reported that one editor whose comic won a “Faux Fauve” left the auditorium in tears when she realized it was fake.

Reaction on social media was swift and negative. The French creator Boulet blasted the organizers on Twitter, and the publisher Éditions Cornélius tweeted, “Tonight we experienced a great moment of shame and humiliation.” “What a great feeling, telling my BF (Aaron Renier) that he won an award at #FIBD2016 only to find out it was a mean joke,” Tweeted Jessica Campbell.

The festival published a rather defensive response to the controversy, saying that Gaitet had been tasked with bringing “freedom, impertinence, and humor [to the ceremony], in keeping with the independent spirit of most comics creators.” And the festival’s executive director, Franck Bondoux, blamed Twitter, saying that all the great awards ceremonies have jokes and “The problem is the dictatorship of the tweet.”
Published by Bado at 7:34 AM