Postmedia, owners of the National Post and dozens of papers across Canada, has cancelled a syndicated cartoon after an “offensive” post was published that depicted the Lone Ranger and Tonto in a bar.

“Last Friday, an offensive cartoon appeared on the comics page of three Postmedia newspapers and online,” Phyllise Gelfand, vice president of communications for Post Media, said in an email to APTN News. “We sincerely apologize to anyone offended by the content.”

The cartoon Close to Home is produced by American cartoonist John McPherson. In the cartoon, two characters – the Lone Ranger and Tonto – are in a bar. Tonto has his head on the table.

“I know newsrooms are shrinking and fewer people are responsible for turning out the paper daily, but, unless a racist robot is responsible for editorializing this section of the paper, a human decided to run that,” wrote McMahon.

“Bad judgment by Postmedia. This is something I’d expect to see in a museum exhibit about racism in popular culture I wish ended decades ago,” wrote Zial Fazel, who also follows McMahon on Twitter.

The Calgary Herald was one of the papers that published the cartoon. When asked about the cartoon, it forwarded APTN’s message to Post Media.

The newspaper made the news in 2017 for publishing a cartoon that some say trivialized reconciliation.

“City Hall, no problem. Go over Reconciliation bridge. Turn left at Apology avenue. Another left at Sorry street. Down Mea-Culpa Boulevard and you’re there,” the text from an editorial cartoon that was published in the Herald.

The cartoon was penned after Calgary city council voted to change the name of the Langevin Bridge. The bridge was named after Sir Hector-Louis Langevin, a father of Canada’s confederation.

Langevin played a role in establishing the residential school system that would see tens of thousands of Indigenous children taken from their parents and forced into state-run schools.

In 1883, Langevin stated that Aboriginal children must be separated from their families or “they still remain savages.”

“While editorial cartoons are the view of the artists and not the paper, the cartoon was seen as a comment on how many wrongs have been inflicted upon Indigenous people in our country,” said Rodriguez in the statement. “Those wrongs have resulted in a mountain of apologies.”

Cartoonist have faced judgement on their art in recent years.

In 2019, Halifax cartoonist Michael de Adder apologized for a cartoon where he depicted a tied up and gagged MP Jody Wilson-Raybould, Canada’s first Indigenous justice minister, sitting in one corner of a boxing ring with Justin Trudeau in the other. 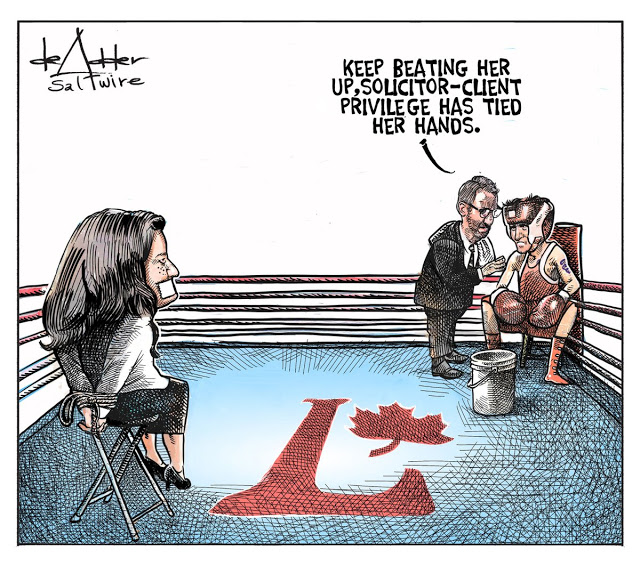 “Keep beating her up, solicitor-client privilege has tied her hands,” a character who appears to be Trudeau’s main adviser is telling him.

The reference was Trudeau’s reluctance to allow Wilson-Raybould to testify about the SNC-Lavalin affair. But many saw an Indigenous woman tied and gagged and drew the conclusion she was being portrayed as one of the legion of missing and murdered Indigenous women and girls (MMIWG).

“Cartoonists sometimes have unanticipated secondary interpretations in cartoons that they don’t intend,” de Adder explained on Twitter. “I assure people who have supported over the course of my career that I’m not tone deaf to concerns about this cartoon.”

Two weeks later, Quebec artist Yannick LeMay apologized for a cartoon he wrote that showed Wilson-Raybould dressed in buckskin and wearing a feather in her hair punching Trudeau.

APTN requested comment from McPherson but didn’t receive a response.

As for Close to Home, Post Media said it’s finished with it.

“The cartoon, Close to Home, is syndicated by a third party and Postmedia has made the decision to no longer publish this cartoon,” wrote Gelfand.

With files from Tamara Pimentel
Published by Bado at 12:00 AM