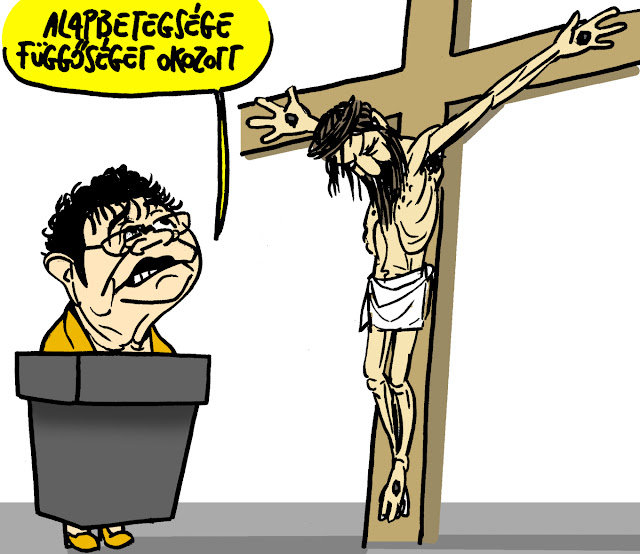 Following the publication of a cartoon in the opposition daily Népszava on 28 April, Hungarian cartoonist Gábor Pápai and his newspaper are facing legal action from the ruling Christian Democratic People’s Party (KDNP) who consider the cartoon “blasphemous”.

Deputy Imre Vejkey announced that his party intended to launch legal proceedings under the Fundamental Law and the Civil Code, targeting the newspaper Népszava.

Tristan Azbej, State Secretary for the Aid of Persecuted Christians circulated a petition, while the cartoonist is also the target of insults and threats of legal proceedings by for example László Toroczkai, a member of the far-right party Mi Hazánk.

Entitled “Chronic”, Gábor Pápai’s caricature represents Cecília Müller (Chief Medical Officer at the NNK, National Centre for Public Health and member of the Government’s “Coronavirus Task Force”) at a press conference during which she faces Jesus crucified on his cross and pronounces dryly: “…His underlying condition caused dependence”.

The sentence refers to previous statements by Cecília Müller who allegedly stated on several occasions that Covid-19 deceased were “predisposed” to die due to pre-existing pathologies.

Cecília Müller has been at the centre of controversies since the beginning of the Covid-19 crisis, and she regularly speaks at press conferences to assess the evolution of the virus. She is accused by the opposition of having hidden information essential to limiting its spread.

The cartoonist contacted Cartooning for Peace and described the situation and the threats he has been facing since the publication of his cartoon. He also says that a radio station has called on its listeners to send in his address.

The press and media situation in Hungary have worsened since Prime Minister Viktor Orbán came to power.

Hungary is ranked 89th in the Reporters Without Borders (RSF) Press Freedom Index 2020, down two places from 2019.


Cartooning for Peace strongly condemns this attack against freedom of expression and of the press as defended in Article 19 of the Universal Declaration of Human Rights.

This lawsuit will only hinder the work of Hungarian journalists once again. Blasphemy convictions can under no circumstances become pretexts used by political parties to censor the press.

Cartooning for Peace is therefore calling for a withdrawal of any legal proceedings that would be launched against Gábor Pápai or the newspaper Népszava and will follow the case closely.