Australia: "Behind the Lines 2020: The year in political cartoons"

Genevieve Jacobs from The Riot Act. 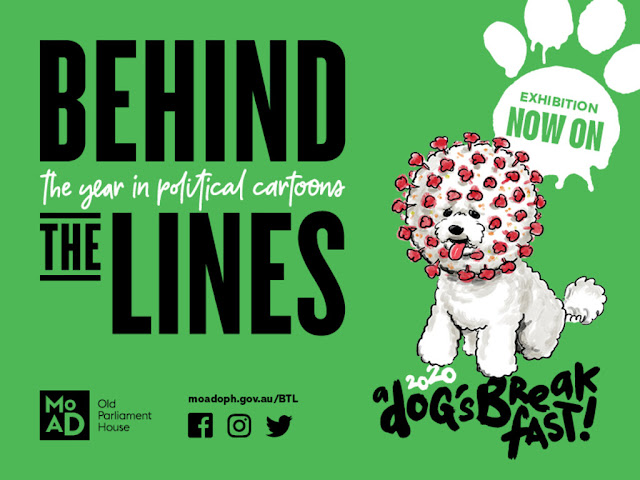 Two-time political cartoonist of the year Cathy Wilcox reckons you can tell a lot about a country by the state of its cartooning.

Accepting an award from the Museum of Australian Democracy as cartoonist of the Year, Wilcox (whose work appears in The Sydney Morning Herald and The Age) noted that in some countries, cartoonists are harried, pilloried or even imprisoned. Elsewhere they face extremism and intimidation.
In Australia, however, the worst she gets is an occasional letter addressed to a “Mr Wilcox”, expressing general outrage, describing a particular cartoon as illustrative of the nation’s inexorable moral decline and passing on commiserations to the cartoonist’s wife.

That, and the fact that one of our major national institutions celebrates political cartooning every year with an exhibition that’s seen by thousands is probably cause for celebration, if not necessarily a reason to relax our guard.
MoAD’s 2020 exhibition is called, justly, A Dog’s Breakfast and includes 104 cartoons from 36 cartoonists.

MoAD director Daryl Karp described 2020 as “a year of bushfires, smoke, hail and plagues” and asked what could possibly make sense of it all.
Political cartooning was one of the answers, she said at the awards ceremony.
“Political cartoonists at their best illustrate issues in a distinct and often very direct way with originality and creativity, commentary and insights. They provoke a response.”

For the first time there’s a digital section in the exhibition and MoAD has also introduced a section focussing on major issues – in this case, Closing the Gap.
Award judges for the major prize included Australian Nobel laureate Professor Peter Doherty.
And there was material aplenty wherever you looked, between natural catastrophes, a pandemic and the US elections.
Wilcox described it as a year of toxic tweets, pandemic catastrophe and cultural clashes.
But could cartoons or science explain why we all started hoarding toilet paper in 2020?

Dr Karl Kruszelnicki had partial answers: that hoarding anything from toilet paper to chocolate is a natural human instinct, reassuring us in uncertain times.
It was not he said, the first year when everything went wrong at once.

“In 1816 we had the year with no summer, after the Mt Tambora volcano exploded, threw 100 cubic kilometres of dust into the air and in doing so led to both famines in the Northern Hemisphere and Mary Shelley’s Frankenstein,” he said.

“102 years after that, we had the Spanish flu epidemic. And now, 102 years later we’re in the midst of COVID.”
But, he said, a renewed faith in science had been a highlight of the year and that there were also opportunities to learn more about how we react in times of crisis.

“If we’d done nothing [in Australia], within a year 1 per cent of the population would have been dead. We did a lot, and that number is way way down”, Dr Karl said.

“Scientists, like journalists and cartoonist, should do their best to tell the truth. Cartoonists need to dig up the bones and find the truth buried underground”.
Cathy Wilcox thinks that cartoonists can act as a counter to the main flow of news, read between the lines of what’s said by people in power, examine the threads of vested interest, and un-spin the message.

“In short, we just call out the BS,” she said.
“A key key performance indicator of democracy is the freedom of citizens to criticise the powerful. That democracy stays strong is not a given.”

The exhibition includes activities for all the family including dog drawing, a trail, and an interactive game inviting visitors to throw a ball into a dog bowl to find out what kind of year they’ve had.

Behind the Lines: the year in political cartoons 2020 is open daily at the Museum of Australian Democracy from 9:00 am to 5:00 pm.