50 years ago, Gene Basset was the President of the Association of American Editorial Cartoonists, followed 20 years later by his son Brian — marking the only time the AAEC had multi-generational presidents.
Gene Basset began his newspaper career in 1950 at the Indianapolis Times as a sketch artist and sports cartoonist.
He remained there until 1953 when he returned to Brooklyn to work for the Brooklyn Eagle (where Walt Whitman was once the editor) as a sports cartoonist and theatrical caricaturist.
He remained there until 1954 when he went to Boston to join The Boston Post as its sports cartoonist.
When the Boston Post folded in 1957 he spent a year working for the Boston Globe and The Christian Science Monitor.
In 1958 he joined the staff of the Famous Artist Schools in Westport, CT where he remained until 1962.
During that period he served on the zoning board of Ridgefield, CT.
In 1962 he left Connecticut and became the political cartoonist for the Honolulu Star-Bulletin.
Shortly afterward, Scripps-Howard Newspapers, based in Washington D.C. hired him as their chief political cartoonist.
He remained in that position until 1981 before going to Vietnam in 1965 to cover the Vietnam War for Scripps-Howard. 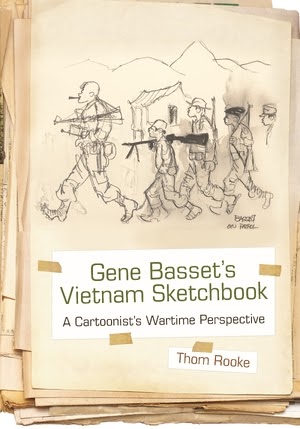 In 1981 he married the love of his life, Ann Komatz. The couple moved to Atlanta, GA where he was the political cartoonist for The Atlanta Journal until he retired in 1993.

In retirement the couple moved back to St. Peter, MN where Ann’s family lived.
During this period he did some cartooning for The Mankato Free Press and won several prizes in the state of Minnesota.
Published by Bado at 1:13 PM