The underground comix scene, which arose from the counterculture of the 1960s, was not especially supportive of female artists.
One of the few to break through and leave a lasting legacy was Aline Kominsky-Crumb, whose frank, self-lacerating, darkly humorous stories helped inspire generations of visual storytellers and the wider culture.
Word started spreading on social media that Kominsky-Crumb died on Tuesday at her home in France from pancreatic cancer. She was 74.
Kominsky-Crumb, born Aline Goldsmith, grew up in Long Island, and first got into underground comix when she was at the University of Arizona in Tucson in the late 1960s.
She moved to San Francisco in 1972 to pursue her artistic career, and soon fell in with underground icon Robert Crumb after mutual friends noted a coincidental resemblance to a character Crumb had created several years previously named “Honeybunch Kaminsky.”
The couple were married in 1978, and had a daughter, Sophie, in 1981.

Kominsky-Crumb was a founding member of the influential all-female collective that produced the anthology Wimmin’s Comix, a long-running feminist comic published by Last Gasp from 1972-1985.
Kominsky-Crumb, along with artist Diane Noomin, broke with the group in the mid-1970s to do their own publication, Twisted Sisters. 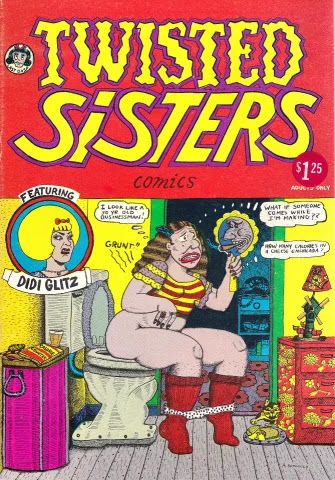 Both comics were some of the first to deal squarely with the political issues around female empowerment, criticism of the patriarchy, sexual politics, lesbianism and other topics central to feminist ideology.
Despite the pointed nature of the material, Kominsky-Crumb was rarely strident or didactic in her approach.

“There are a lot of stereotypes Jewish women had to deal with in the twentieth century, culminating in the cultural ideal of the ‘Jewish American Princess,’ (JAP) who is materialistic and a social striver, but never actually can join white womanhood because she's too loud and too straightforward ("oversharing") and her face and hair and body always give her away as somehow wrong,” said graphic memoirist and comics scholar Miriam Libicki.
“Aline first rebelled against that, then embraced it in her later work. Her aggressive approach to autobiography showed me how I could make art and not lose myself in polite Canada.” 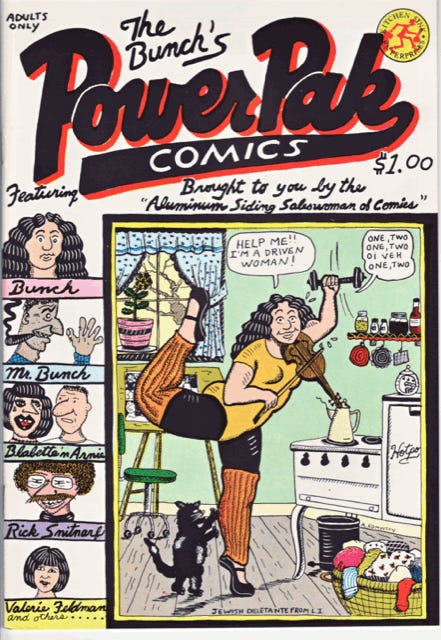 Her drawing style deliberately emphasized the grotesque and awkward, and squeezed humor from what today we’d describe as “deep cringe” moments.

“Aline’s work really stood out when I first saw her in early issues of Wimmen’s Comix,” said cartoonist Roberta Gregory, a Wimmins’ Comix alumna who became the first woman to self-publish her own work and created the long-running “Bitchy Bitch” series.
“It was exuberant, ‘primitive’ (in the good sense) and breaking every art and storytelling rule in the world. It was so inspiring: If you had a story to tell, go ahead and tell it with all ya got!”
Never commercially successful and often critically derided in its time, the vast influence of Kominsky-Crumb’s groundbreaking work in this era can be seen in succeeding waves of autobiographical graphic novels, notably Alison Bechdel’s Fun Home, and in the self-deprecating “hot mess” brand of 21st century feminist humor of comedians like Lena Dunham and Phoebe Waller-Bridge. 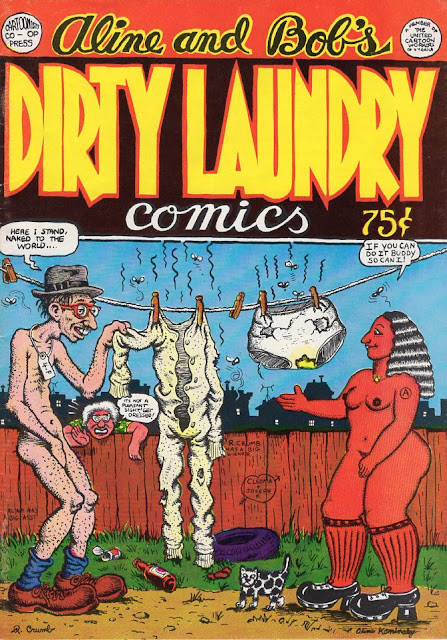 The contrast between their art, their characters and their sensibilities made for an unnerving reading experience, which was part of the point.
In the 1980s, she took over as editor of the influential post-underground magazine Weirdo (founded by Robert, later edited by Peter Bagge), another important antecedent to the literary comics and graphic novels that dominate today’s best seller lists.

By the 2000s, Kominsky-Crumb’s contributions to art and comics were being more broadly recognized.
She published a well-received memoir, Need More Love (MQ Publications) in 2007, and has exhibited solo and combined shows at high-end galleries worldwide.
She was also a vivacious public presence, in contrast to her more reserved husband, making their joint appearances often quite amusing.

Kominsky-Crumb’s illness was not widely known, and her passing comes as a shock to many in the world of art and comics. The family requests privacy in their time of grief.
Published by Bado at 12:00 AM