Cartoonist of the Macabre Gahan Wilson

From "The Comics Journal" 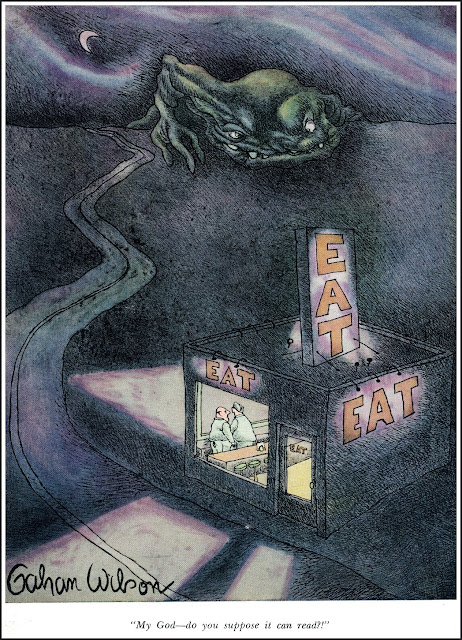 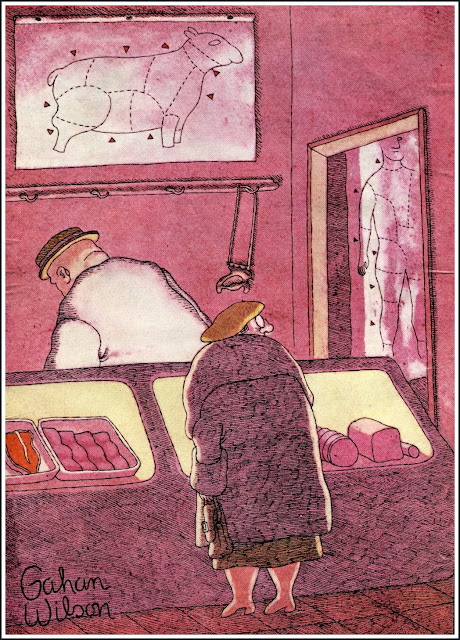 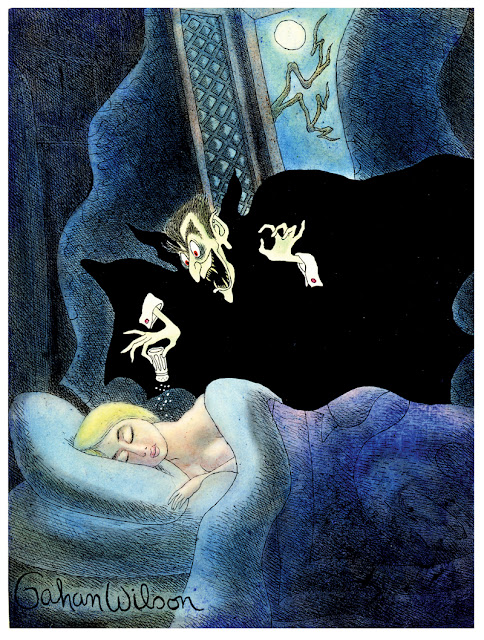 Here are excerpts of an interview with Gahan Wilson conducted by Richard Gehr in The Comics Journal:

Some of Wilson’s most important work has (or is about to) become newly available. Last year, Fantagraphics published a handsome three-volume box set containing all his cartoons for Playboy, the magazine in which he’s appeared monthly since 1957. And in August Fantagraphics will publish the complete Nuts, the virtuosic semi-autobiographical comic strip he drew for National Lampoon in the early seventies.

Of course Wilson still draws regularly for The New Yorker, too, a relatively new relationship that extends back to 1980. In a recent cartoon for the magazine, a large dog bares its teeth while clawing at the tablecloth. “He’s not begging,” the host advises his obviously dismayed dinner guest. 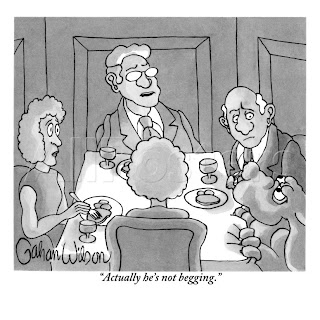 What sparked your interest in cartooning?

When I was eight or nine, I was browsing through the books section of a second-hand store and I saw this set of bound volumes of Punch. I bought one of the volumes for fifteen cents and took it home. After pleading with my father, he very sweetly drove me back to the place and plopped down for the entire set, bless his heart. I can’t say how important that was.

They had fantastic people back then. They had Honoré Daumier, George Cruikshank, and all kinds of amazing painters but also did cartoons. Some of them were wonderfully political.

Later, I realized those were the artists who got me into cross-hatching. I began to think, “What the hell, let’s make a really interesting drawing while we’re at it.”

Did you ever consider using other people’s gags?

No, I decided very early, even before I started selling, that I wouldn’t. I was devastated when I learned that Addams, Arnold Roth, and all these guys were using other people’s ideas. I was crushed. Boy, it was a shock.

Mad magazine started around the same time as your cartooning career. What was your take on it when it launched in 1952?

I was good friends with Harvey Kurtzman later on, but there was a hokiness about it that didn’t appeal to me. The humor wasn’t edgy enough for me. It had some good slapstick. But the outfit I fit in with instantly, was National Lampoon. That was a remarkable assemblage of brilliant sons of bitches. Its spirit was insidious. It was like being part of a pirate crew. We were like some kind of religious sect. We were out to show the bastards, by God, and we did, very effectively. I just wish something like that would happen again. But there’s no sign of it whatsoever, even though things are much worse now than they were then.

What are the tools of your trade?

I use Croquil pens. I like that fine line. For colors I just play around with all kinds of different mediums. Sometimes I’ll start with watercolor and then spray it with a workable fixative. Then I can do a wash over that or rub the cels or whatever to enrich the depth of the colors. The lighting depends on what the scene is. It’s like a movie. You draw the basic thing and then you do the lighting to make sure it brings out what’s it’s supposed to. And if you use a spray fixative, you can wipe it off and start over again without having to start from scratch. That’s pretty much it, in a nutshell.

How often do you submit work to The New Yorker?

I try for every week. I send them ten to a dozen, sometimes more. And I do at least one solid batch every month for Playboy. But it varies.

Does Playboy guarantee you a page every month?

Every issue has a full page, bless Hefner’s heart. But there’s nothing written anywhere that I’m aware of that says they have to take it. Sometimes I’ll do a spread, but I’m doing them less often.

How do you think New Yorker cartoons have changed over the decades?

They’ve gotten a little bit conservative in that they used to do full pages and used to be pickier as far as the talent was concerned, both in terms of humor and art. They’ve been nice enough to the golden oldies, though. But the art thing has kind of slipped away.

The New Yorker and Playboy. Those are the only two left.
Published by Bado at 2:00 AM