Cartoonists and the Arab Spring 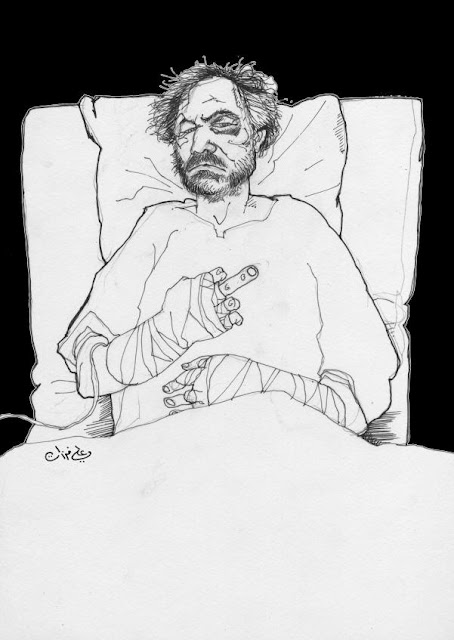 The Arab revolutions have provided great fodder for political cartoonists, even if some in the region have paid a high price for daring to illustrate what would have been unthinkable only a year ago.
“This crisis is unheard of in contemporary Arab history and we must bear witness to it,” said Lebanese cartoonist Stavro Jabra.

“Not so long ago, no one dared draw a king, a president or even a deputy,” added the artist. “Today cartoonists have been let loose, it’s total freedom.”

“Fellow cartoonists before would tell me how lucky I was to be in Beirut – considered more open than other Arab societies – while all they could criticize was the U.S. and Israel.”

But today the wall of fear has come crashing down and no sooner did the Arab uprisings erupt in January than cartoonists sharpened their pencils and began illustrating them along with the dictators they brought down.
From Tunisia’s strongman Zine El Abidine Ben Ali, to Egypt’s Hosni Mubarak and Libya’s dictator Muammar Qaddafi, all became fair game for caricaturists long muzzled in the region.

“These cartoonists who risk their lives are examples of resistance ... and their work nourishes our thoughts and inspires us,” leading French cartoonist Plantu said this week on a visit to Beirut.

The artist, who has become an institution at the French daily newspaper Le Monde and who created the Cartooning for Peace foundation, spoke to AFP on the sidelines of a conference on the role of cartoonists in the Arab revolts.

The conference was organized by IPEMED, a Paris-based think-tank.

Among the drawings Plantu presented to illustrate the courage of his peers was one showing Syrian cartoonist Ali Ferzat, both hands bandaged and writing “Long Live Freedom” through a pen in his mouth.

Ferzat, one of the best-known cartoonists in the Arab world and whose work is critical of the embattled regime of President Bashar al-Assad, was severely beaten up by Syrian security forces last summer.

He is currently in Kuwait undergoing treatment.

“The thugs in Damascus took him, tortured him and burned him with cigarettes and even broke his fingers,” said Plantu, whose real name is Jean Plantureux.

He said Ferzat will soon be travelling to Paris to receive a prize from Reporters Without Borders for his work. In October, the Syrian cartoonist was awarded the Sakharov prize from the European parliament.

“His courage is an example for all of us,” said Plantu.

He also pointed to the work of several other cartoonists, including Libya’s Kais al-Halali, killed at an army checkpoint in March shortly after painting one of the political street murals for which he was locally famed.

According to witnesses, he had just finished drawing a caricature of Qaddafi on a wall in Benghazi when he was struck down by a bullet.

Another Arab cartoonist who has come to the forefront amid the revolts is Tunisian artist “Z”, who conceals his real identity to avoid censorship.

In one of his recent cartoons, he illustrates the “birth of the first Arab democracy”.

A woman is shown in labor, surrounded by a horde of reporters asking her physician: “So doctor, is it a veil or a beard,” referring to the victory of an Islamist party in last month’s elections in Tunisia.

Not long ago, such cartoons would have been unthinkable but they are now becoming part of the political landscape in the Middle East.

“A drawing is a barometer of what is going on in a country,” Plantu said. “Thanks to cartoonists from all over the world we are able to narrate a world in turmoil through our drawings.”

Added Jean-Louis Guigou, of IPEMED: “The more tragic a situation, the more humor can make it comical.”

Posted by Alan Gardner
December 8, 2011
Reporters Without Borders and French newspaper Le Monde have announced the recipients of The 2011 Press Freedom Prize. Syrian cartoonist Ali Ferzat was honored for his cartoons that “depict the abuses of Syria’s regime, which has come under growing criticism this year for its efforts to tamp down a growing pro-democracy movement”
Also honored was the Burmese newspaper Weekly Eleven News.
From their press release:

“This year we are honouring a courageous journalist who has been the victim of brutal repression by an obsolete government,” Reporters Without Borders secretary-general Jean-Francois Julliard said. “Ali Ferzat fully deserves this award. His cartoons target the abuses of a desperate regime with its back to the wall and encourage Syrians to demand their rights and to express themselves freely.
“We are also honouring a newspaper that has never bowed to Burma’s censors. Weekly Eleven News has always stood up to the military junta, using extraordinary ingenuity to slip through the censorship net and inform the Burmese public. Its editors and reporters have taken considerable risks and deserve our encouragement. At a time when Burmese political life and society seem to be showing signs of opening up, Weekly Eleven News has more than ever a key role to play.”

DEC 8
The Syrian dictator says "we don't kill our people."