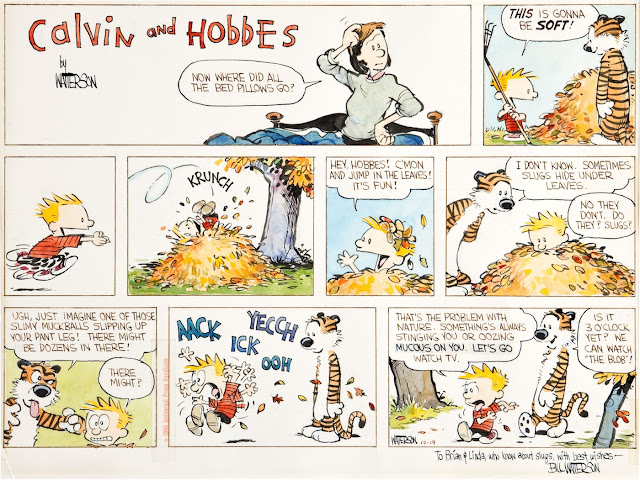 An original hand-colored 1986 Sunday Calvin & Hobbes original has been sold at auction for $203,150 (login required to see final bid amount). The strip was owed by Adam@Home and Red and Rover creator Brian Basset, who told me last September that he acquired the original back in 1986 after agreeing to exchange originals with Bill Watterson. A recent financial pinch prompted him to put the piece up for auction.

Here’s what Brian told me back in September:

Parting with the Watterson original was not an easy decision, but I believe it is the right decision. I am so thankful of Bill Watterson’s generosity and the opportunity his talent has given me more than a quarter of a century later. It is now time for someone else to enjoy owning this piece of Americana.

To give you perspective on the value of this piece, an original 1955 Peanuts Sunday strip by Charles Schulz sold for $113,000 and a 1957 and 1962 daily and Sunday Peanuts strip sold for a combined $106,000.
Back in February a Watterson original water color piece for a calendar was auctioned off for $107,550.

A quarter-century ago, Brian Basset and Bill Watterson did what many cartooning peers do as an act of camaraderie: They swapped originals.
As with interview access to the “Calvin and Hobbes” creator himself, though, access to Watterson’s dazzling original artwork soon became an increasingly rare thing — both before and after he ended his legendary strip in 1995. So it made headlines recently when Basset — creator of the strips “Red and Rover” and “Adam@Home” — decided to put his prized 1986 Watterson original up for auction, citing that he was in a financial pinch.
Now, the record windfall from the Watterson gift should certainly help.
Over the weekend, the hand-colored Sunday original — a 13-by-9-inch marker-pen-and-watercolor on Bristol board — sold for a record-shattering $203,150, the Dallas-based Heritage Auctions told Comic Riffs on Saturday. (The hammer price before tacked-on premiums was $170,000, a Heritage official told us.)
“A world record price like this is a testament to just how beloved ‘Calvin & Hobbes’ was and is,” Todd Hignite, Heritage Auctions vice president, says in a news release, referring to the creators of “Peanuts,” “Little Nemo in Slumberland” and “Popeye.” “The final price realized tops any offering from any cartoonist ever, including the giants like Charles [Schulz], Winsor McKay and Elzie Segar.”
The previous reported record for the sale of a comic-strip original at auction was $113,500, in 2007, for a “Peanuts” original.
“I am absolutely thrilled and blown away with the final tally,” Basset tells Comic Riffs on Monday.
As is customary with many Heritage auctions, the house declined to identify the buyer out of respect to the buyer’s wishes. But Basset was able to convey the recipient’s reaction.
“I did find out, though, from the auction house that the proud new owner — a cartoon collector — of the Watterson original is equally thrilled with their purchase.
“This makes me feel great,” continues Basset, who has noted he had economic needs with a divorce in the rear-view mirror and matrimony on his road ahead. “I was hoping it would go to someone who would enjoy it as much [as] I had for all the year I owned it.”