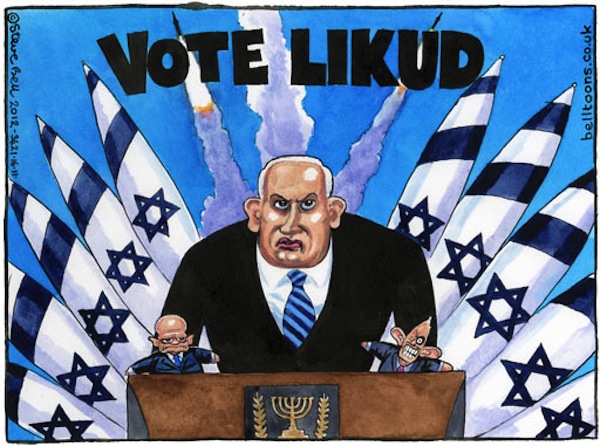 A recent cartoon by The Guardian’s editorial cartoonist Steve Bell is being attacked as antisemitic.

The cartoon depicts Israeli Prime Minister Benjamin Netanyahu as a puppet-master controlling Foreign Secretary William Hague and Tony Blair. A complaint has been lodged with Press Complaints Commission alleging the cartoon as “plainly antisemitic.” The Community Security Trust, a British charity established to “ensure the safety and security of the Jewish community” called the cartoon “subtle” antisemitism.


Steve has rejected the label. From The Jewish Chronicle:


Mr Bell said he had chosen to draw the cartoon because “the coverage of Operation Pillar of Defence has been so skewed in favour of the Israeli side, particularly I regret to say on the BBC, that I do personally feel quite a strong need to make the counter argument”.

Mr Bell added: "I also refute the charge that I am somehow deliberately repeating the antisemitic ‘trope’ of the puppet master.