Thompson was born in Denmark in 1956. He grew up in Europe, a lifelong comics fan, reading both European and American comics in Denmark, France, and Germany. He was an active fan in his teen years, writing to comics — his letters appeared in Marvel's letter columns circa early 1970s — and contributing to fanzines from his various European perches. In late 1977, at the age of 21, he set foot for the first time on American soil. One "fanzine" he had not contributed to was The Comics Journal, which Groth and Michael Catron began publishing in July of 1976. That was soon to change.

"Within a few weeks of his arrival," said Groth, "he came over to our 'office,' which was the spare bedroom of my apartment, and was introduced by a mutual friend — it was a fan visit. We were operating out of College Park, Maryland and Kim's parents had moved to Fairfax, Virginia, both Washington DC suburbs. Kim loved the energy around the Journal and the whole idea of a magazine devoted to writing about comics, and asked if he could help. We needed all the help we could get, of course, so we gladly accepted his offer. He started to come over every day and was soon camping out on the floor. The three of us were living and breathing The Comics Journal 24 hours a day."

Thompson became an owner when Catron took a job at DC Comics in 1978. As he became more familiar with the editorial process, Thompson became more and more integral to the magazine, assembling and writing news and conducting interviews with professionals. Thompson's career in comics began here.

In 1981, Fantagraphics began publishing comics (such as Jack Jackson's Los Tejanos, Don Rosa's Comics and Stories, and, in 1982, Love and Rockets). 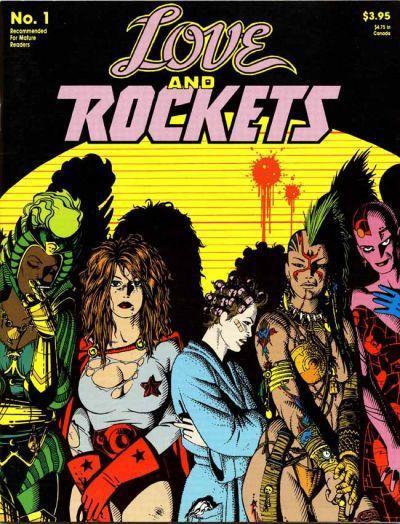 Thompson was always evangelical about bandes dessinées and wanted to bring the best of European comics to America; in 1981, Thompson selected and translated the first of many European graphic novels for American publication — Herman Huppen's The Survivors: Talons of Blood (followed by a second volume in 1983). Thompson's involvement in The Comics Journal diminished in 1982 when he took over the editorship of Amazing Heroes, a bi-weekly magazine devoted to more mainstream comics (with occasional forays into alternative and even foreign comics). Thompson helmed Amazing Heroes through 204 issues until 1992.

Among Thompson's signature achievements in comics were Critters, a funny-animal anthology that ran from 50 issues between 1985 to 1990 and is perhaps best known for introducing the world to Stan Sakai's Usagi Yojimbo; and Zero Zero, an alternative comics anthology that also ran for 50 issues over five years — between 1995 and 2000 — and featured work by, among others, Kim Deitch, Dave Cooper, Al Columbia, Spain Rodriguez, Joe Sacco, David Mazzuchelli, and Joyce Farmer. His most recent enthusiasm was spearheading a line of European graphic novel translations, including two major series of volumes by two of the most significant living European artists — Jacques Tardi (It Was the War of the Trenches, Like a Sniper Lining up His Shot, The Astonishing Exploits of Lucien Brindavoine) 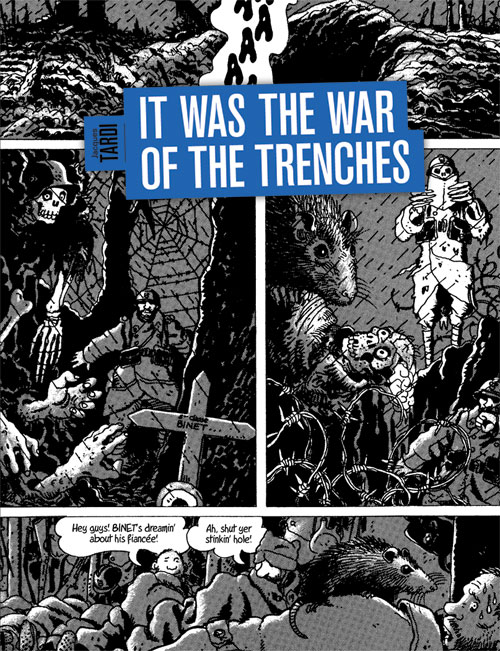 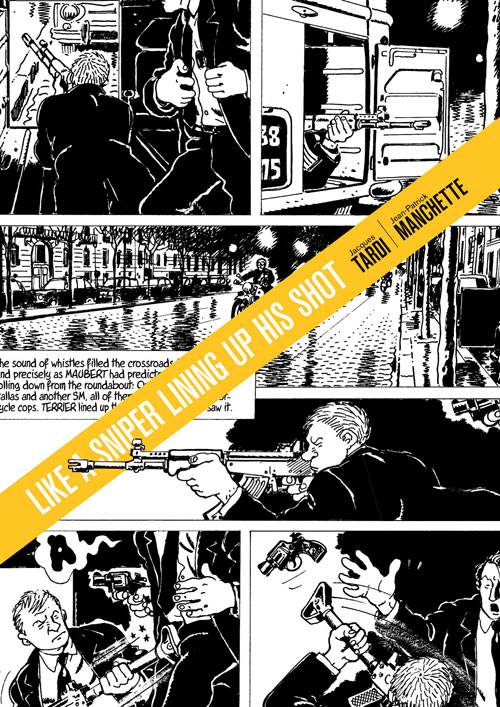 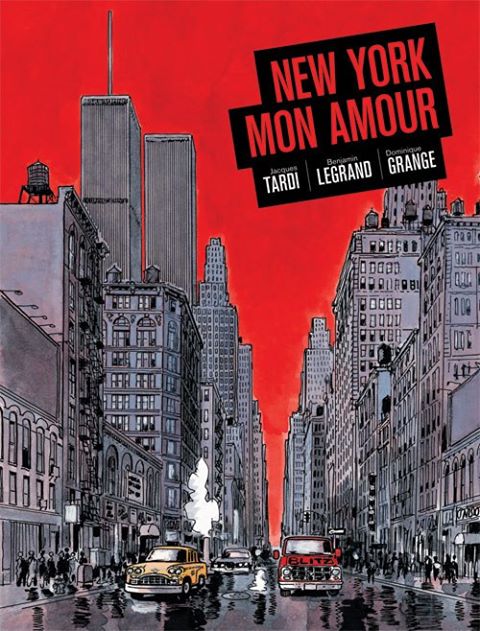 and Jason (Hey, Wait..., I Killed Adolf Hitler, Low Moon, The Left Bank Gang) — and such respected work as Ulli Lust's Today Is the Last Day of the Rest of Your Life, 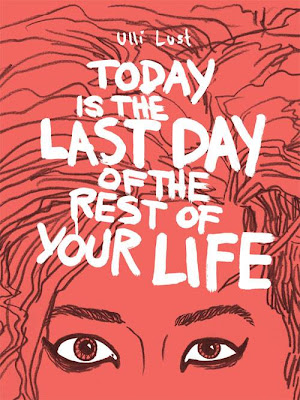 Lorenzo Mattotti's The Crackle of the Frost, Gabriella Giandelli's Interiorae, and what may be his crowning achievement as an editor/translator, Guy Peelaert's The Adventures of Jodelle. 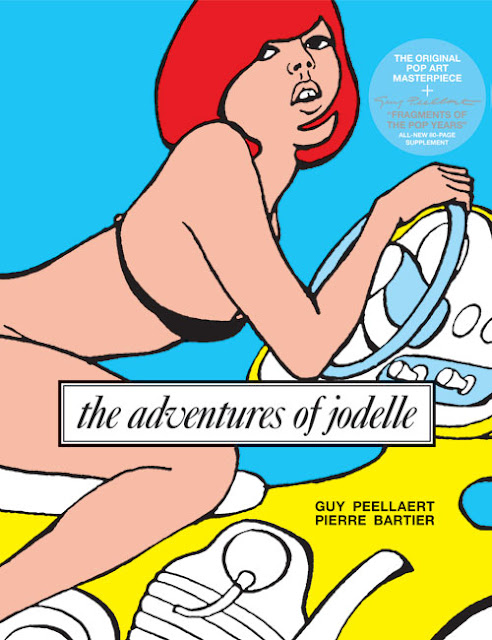 Throughout his career at Fantagraphics, Thompson was active in every aspect of the company, selecting books, working closely with authors, guiding books through the editorial and production process. "Kim leaves an enormous legacy behind him," said Groth, "not just all the European graphic novels that would never have been published here if not or his devotion, knowledge, and skills, but for all the American cartoonists he edited, ranging from Stan Sakai to Joe Sacco to Chris Ware, and his too infrequent critical writing about the medium. His love and devotion to comics was unmatched. I can't truly convey how crushing this is for all of us who've known and loved and worked with him over he years."

Thompson was diagnosed with lung cancer in late February. He is survived by his wife, Lynn Emmert, his mother and father, Aase and John, and his brother Mark.

A tribute by Steve Brodner. 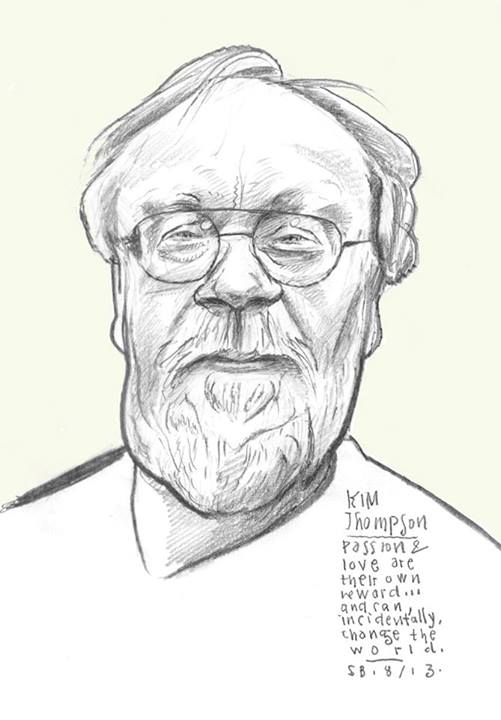