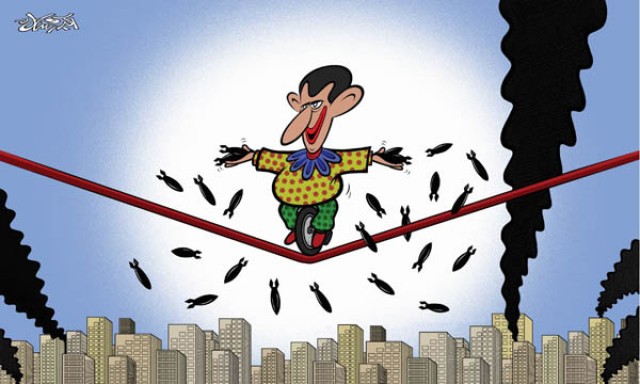 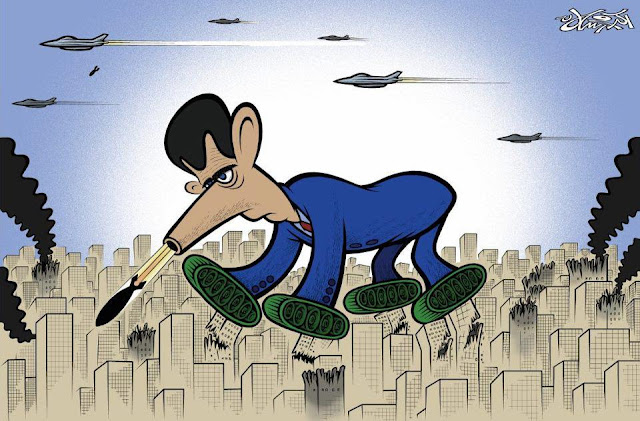 Readers will also recall that in 2011 Syrian cartoonist Ali Ferzat was grabbed by a car load of assailants, taken to the outskirts of Damascus and beaten senseless. As the attackers left him bleeding on the side of the road, they finished up by breaking his fingers. They told him that that was a lesson to discourage him from making any further disrespectful cartoons of their boss.

The cartooning world, and in fact the entire world of journalism, responded with an unprecedented influx of critical letters, cartoons, editorial statements, news articles, and other media attacks against the Assad regime for its brutality and apparent impunity when attacking journalists. It may be that since that incident with Ali Ferzat, the regime has learned that is better to just disappear a cartoonist than have them beaten.

Despite repeated inquiries through a number of sources, Cartoonists Rights Network International has found it difficult to find any reliable or corroborated reports on Akram Raslan's situation.


Very recently, we did receive a report from a reliable but un corroborated source, that Akram Raslan has been tortured repeatedly, and transferred from one prison to another since his illegal detention. This latest report says that he will be put on trial on June 3, 2013 for the crimes of disrespecting the leader, being in league with the rebels, and working against the interests of the state.

Apparently, the Bashir al-Assad regime has set up a special court to try those people it has declared enemies of the state. We can only speculate on what the inevitable finding of the court will be, and what punishment might be expected if he is found guilty.

Akram Raslan has become for us an example of the regime's brutal actions against its enemies.

Cartoonists Rights Network International calls on the Syrian government to drop charges against cartoonist Akram Raslan, release him immediately, and restore him to his family.

It is well-known that journalists working in Syria are among the most endangered journalists in the world. Committee to Protect Journalists estimates that over 37 journalists have been killed in Syria while doing their job since the Syrian revolution began.

It is only through a coordinated and fast-paced effort to communicate with the Syrian government that our collective objections to the trial of cartoonist Akram Raslan might result in his being released.

Therefore, we call on all cartoonists, human rights organizations, and friends of free speech, to draw cartoons, and write letters in support of Akram Raslan to the Syrian Ambassador in your country.

The following is a proforma letter to your Syrian Ambassador:

It has come to (our, my) attention that the Syrian Government will soon put cartoonist Akram Raslan on trial. We are concerned because it seems the Syrian government does not extend to any journalists a right to have their own independant opinions. In fact putting him, and others like him, on trial proves this point.

(I,We) wonder if it might make better strategic sense for the Syrian government, even under these present adverse circumstances, to demonstrate its fundamental respect for human rights and free speech.

The release of Akram Raslan and other intellectuals, instead of putting them on trial would send a clear message to the world's media. This message would confirm that the Syrian government is not the brutal, unthinking entity that many media outlets are trying to portray.

Please, Mr. Ambasador, recommend to your government that putting cartoonist Akram Raslan on trial, and continuing to detain him, would be counterproductive for the Syrian government's efforts to portray a good image in the world at this time.

(copy CRNI and as many human rights organizations as practical in your country, as well as to your Ministry of Foreign Affairs/Syria desk.)
Published by Bado at 7:23 AM