Bob Mankoff’s ‘How About Never — Is Never Good for You?’ 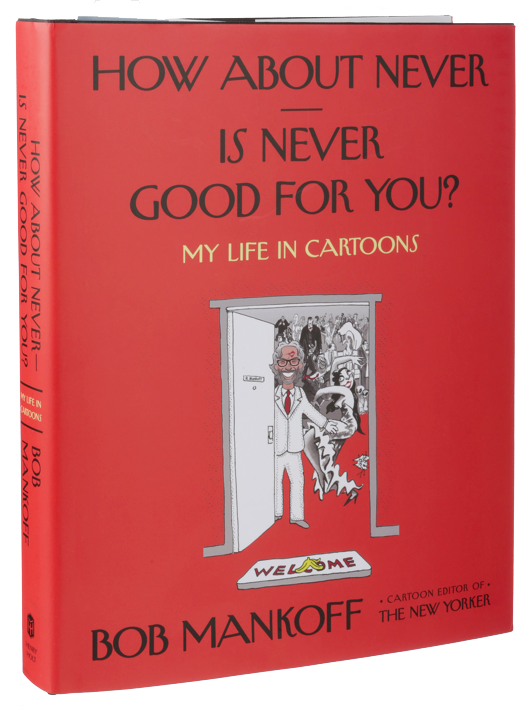 If anyone is entitled to pepper his memoir with New Yorker cartoons, it’s the cartoon editor of The New Yorker. So Bob Mankoff’s new book is half prose, half illustrations and tirelessly playful. But the artwork and text work together to tell a fizzy, jokey story about a long and busy career. Its title, “How About Never — Is Never Good for You?” comes from a famous Mankoff cartoon that depicts a businessman on the telephone, dodging a lunch date. Now around 70, Mr. Mankoff depicts himself with a big grin and a lipstick mark on his forehead, saying those words to the Grim Reaper. 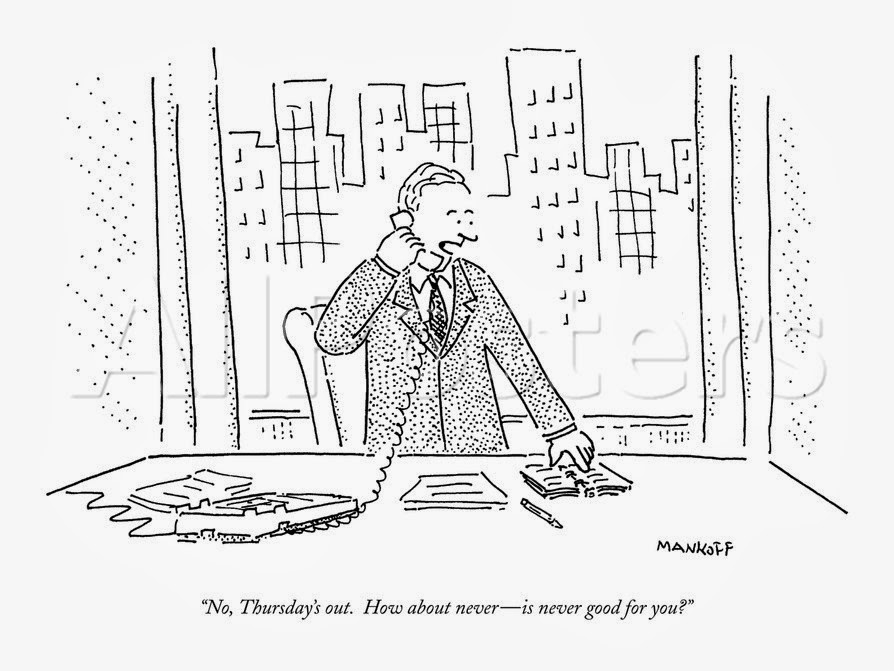 Mr. Mankoff submitted hundreds of cartoons to The New Yorker before selling one. He was a freelancer for the magazine for 20 years before stepping into the cartoon editor’s shoes, even though the previous cartoon editor of 24 years, Lee Lorenz, was still in them. (“I was an ingrate.”) In 1992, he founded the online Cartoon Bank, which licenses and sells New Yorker cartoons, and even edited the gargantuan 2004 anthology of the magazine’s cartoons. He developed a pointillist drawing style that is as distinctive as that of other longtime New Yorker artists. And he read endless cartoon submissions. He rejected Norman Mailer’s, which wound up in Mailer’s book “Modest Gifts.” (“Let’s just say it was a very apt title.”) When David Mamet sent him a batch of cartoons with a letter beginning “Congratulations!” Mr. Mankoff replied that he had taken the liberty of sending him a play.

“People often ask me about my upbringing, and if there was anything particular about it that made me become a cartoonist,” Mr. Mankoff writes at the start of the book’s first chapter. He then appropriates the first paragraph of “The Catcher in the Rye” as if it were the beginning of his own story. He caps this off with a drawing featuring Salinger’s image on television and the caption: “And, in literary news, J. D. Salinger’s privacy has been violated once again by his appearance in this cartoon.”

Mr. Mankoff is wise enough to know that his readers have more interest in how The New Yorker picks and edits cartoons than in his childhood. So he limits the boyhood material to explaining how he learned to draw (partly at the High School of Music & Art in New York, partly from those ads in the back of pulp magazines); taking unreasonable pride in his youthful resemblance to Jerry Lewis; and demonstrating that his sense of humor was hereditary. During World War II, his father sent his mother a handbag and wrote, “It’s pretty popular in Paris, so it should be O.K. in the Bronx.” 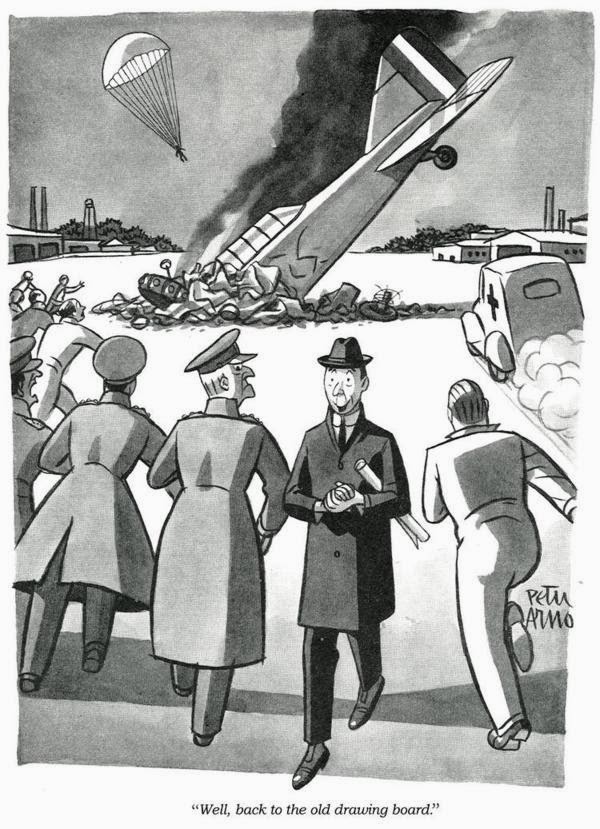 The book’s title, and Mr. Mankoff’s best-known caption, is as famous as Peter Arno’s “Well, back to the old drawing board,” which also appears, along with E. B. White’s “I say it’s spinach and I say to hell with it,” in a chapter on the history of captioned cartooning. Mr. Mankoff describes how the 19th-century Punch cartoon began as a not particularly funny illustrated drawing, and that stuffy American cartoons after the turn of the 20th century weren’t much better. Then he introduces the New Yorker era and offers enough glimpses of the greats to prove the importance of this one publication’s influence — as if proof were needed. 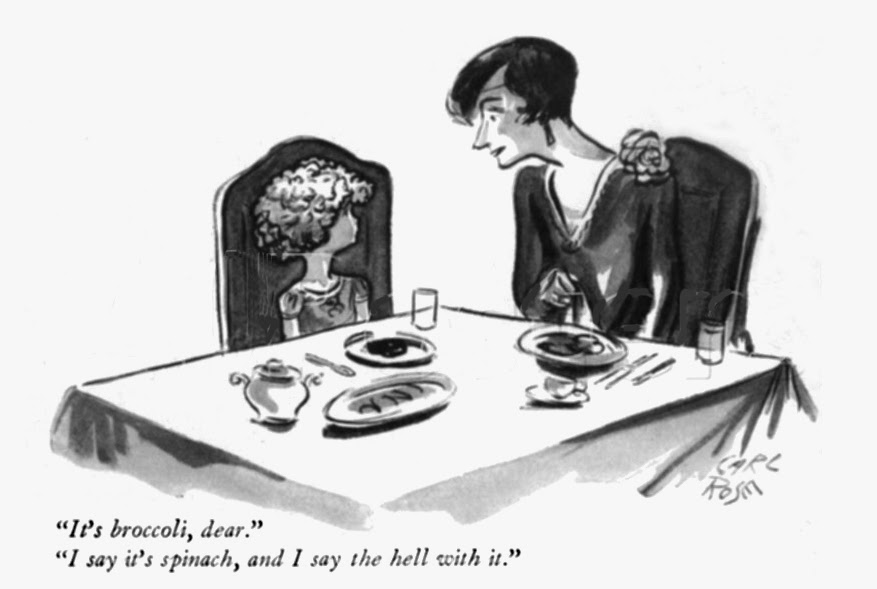 This is a generous book, giving abundant credit to both the older generation of cartoonists whom the young Mr. Mankoff hero-worshiped to the new blood he has brought to the magazine during his tenure. Although he has nothing but admiring, even fawning things to say about David Remnick, The New Yorker’s editor — whose facial expressions mean everything to Mr. Mankoff on cartoon vetting day — his minimal remarks about the Tina Brown era speak volumes. Only a few of her cartoon choices appear here, but it’s easy to see why their coarseness and (this is rather important) lack of humor would make a cartoon man’s blood boil.

This book presents itself as a guide for aspiring cartoonists. It does offer a wide range of editorial tips about keeping drawings concise and logical, about the difference between absurdist humor that works (Roz Chast’s) and doesn’t, about how to build on tradition without copycatting. It also claims, more misleadingly, to provide a crib sheet for those who enter The New Yorker’s weekly caption contest. Mr. Mankoff uses that as a tease throughout, and when he finally gets to a five-point list on “how to ‘win’ ” the contest, it’s either a malfunctioning joke or just a disappointment.

The following are not spoilers, just samples: Point 4 is “Socialize,” as in trying out your captions out on friends and seeing which ones get a laugh. Point 5 is “Fantasize”: Just imagine you’ve won. And while you’re at it, imagine your winning lottery ticket and MacArthur grant. “It won’t make any of these more likely to happen, but after all the hard work you’ll have put in, you deserve it,” Mr. Mankoff writes.

Cut him a break, if you like: He’s a humorist, his writing has a cute streak, and he’s not about to give away any trade secrets. Not even The New Yorker’s formula for paying cartoonists is disclosed here, and when Mr. Mankoff was a freelance artist, he certainly had trouble figuring it out. The book also describes how freelancers should approach the magazine: Mr. Mankoff makes the seemingly unapproachable New Yorker sound surprisingly accessible. But it also has a daunting accept-reject ratio. Any cartoonist who cracks The New Yorker with even one cartoon has essentially climbed Mount Everest. And Mr. Mankoff, from his position at the top of the heap, repeatedly makes sure his readers know that.


How About Never — Is Never Good for You?: My Life in Cartoons
By Bob Mankoff 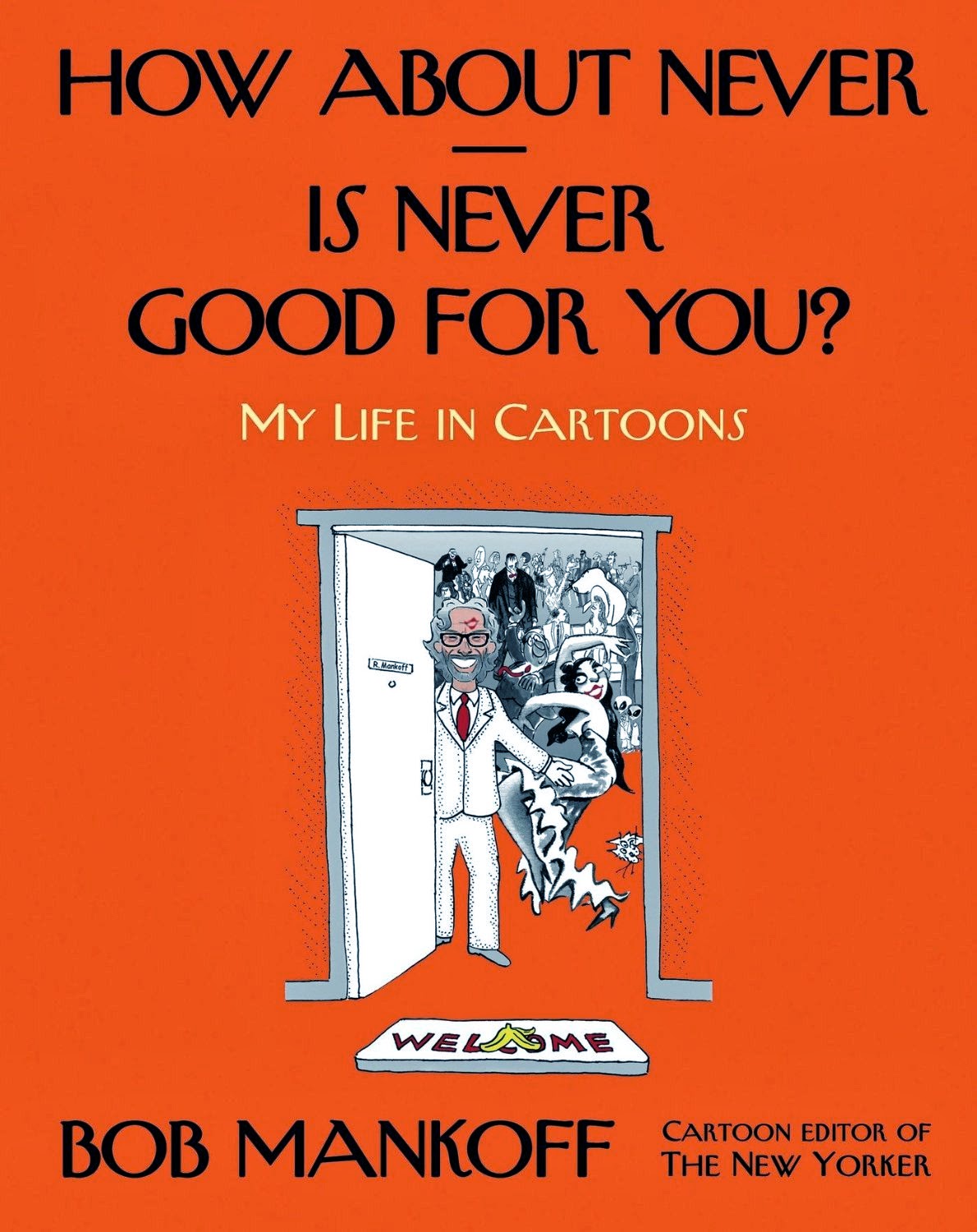 Sunday, Morley Safer took 60 Minutes to the New Yorker to see how the cartoons were selected.