This is personal. I knew and loved Richard Thompson long before he became famous. We worked together on the staff of The Spur, the student newspaper at Montgomery College’s Rockville, Maryland campus. He drew cartoons for each issue, I was the features editor. How I wish I still had those issues from 1976 to 1978!

Richard never graduated from Montgomery College (a.k.a. MC), but the college gave him the Milton F. “Sonny” Clogg Alumni of the Year award in 2004 anyway. I’m sure Richard saw humor in the fact he got an alumni award although he dropped out. 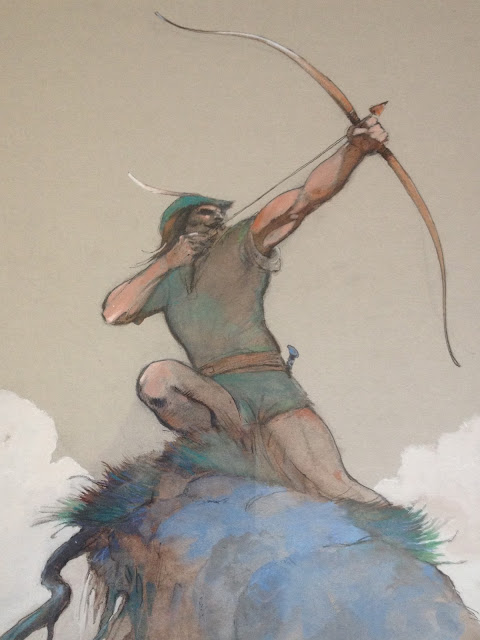 It was during our time at Montgomery College that we discovered the fun of historic recreation, specifically, dressing up in medieval garb and participating in feasts, mock battles, and providing local color at Renaissance festivals.

Richard was a natural jester, and he dressed the part. He was always soft-spoken, and his wit was incredibly fast and dry. My first costume/personae was as a member of Robin Hood’s band of merry men (and women) – green tights, tunic and hood, moccasin boots, archer’s bow and stout staff.

Richard, in addition to being a wonderful cartoonist, was also a great illustrator. One year for my birthday, Richard presented me with a beautiful painting of an archer, heroically poised on top of an outcropping of earth. The title he wrote on the back was “Rubin Hood.” I treasure this piece of his artwork to this day.

The Blue Screen of Death

On July 16, 2009, Richard announced that he had been diagnosed with Parkinson’s disease, a problem he described as “a pain in the fundament” which slowed him down but did not affect his drawing hand.

His humor stayed as sharp as ever.

It is a sobering thought that a classmate has died. Someone of my era. It really brings one’s own mortality into view.

And I am sad that the world has lost a wonderful voice. But we have Richard’s vast collection of art and comics to keep us company and raise our spirits. They live on, while our mortal bodies eventually fail.

Rest in peace, my friend.

In lieu of flowers, the family asks those who are so inclined to make donations to the Michael J. Fox Foundation for Parkinson’s Research, either directly or through Team Cul De Sac.

"Richard Thompson: The art of being a smart, humane artist in a vitriolic, wired world"
Published by Bado at 12:00 AM