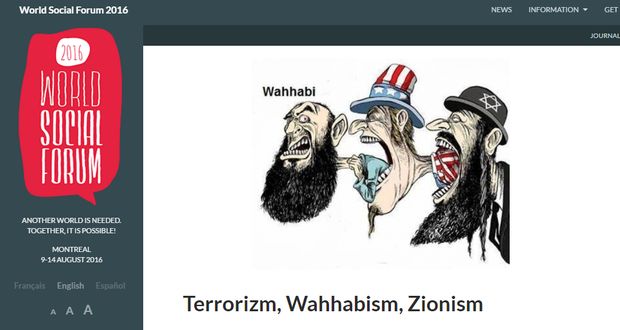 
The World Social Forum, expected to draw more than 10,000 participants, was told last week to remove the Canadian government logo from its list of partners after two Liberal MPs expressed disgust over what they called a “blatantly anti-Semitic cartoon” on the event’s website.

Forum organizers cancelled a session that had been scheduled to show how Islamist terrorists are “in the service of world Zionism-capitalism.” The page for the event had featured a cartoon of a hook-nosed orthodox Jew with a Star of David on his hat, a drawing that Reuben Poupko, co-chairman of Centre for Israel and Jewish Affairs (CIJA) Quebec, said was “not so different from those that appeared in Nazi papers.”

According to the website, the goal of the WSF 2016 is “to gather tens of thousands of people from groups in civil society, organizations and social movements who want to build a sustainable and inclusive world, where every person and every people has its place and can make its voice heard.”

The background information of the workshop was as follows:


“Islam is the religion of mercy and civilization. Islamic culture alien to Wahhabi fundamentalism terrorists. They are mercenaries of Saudi in the service of world Zionism-capitalism. They cooperate for Islamophobia by demonizaton of Islamic spirituality. They cooperate for misrepresentation, by accuse Palestinian freedom fighters by terrorism and legitimization crimes of fundamentalist regime in Israel.”

And what better way to show “Islamophobia” than by purveying Jew hatred.