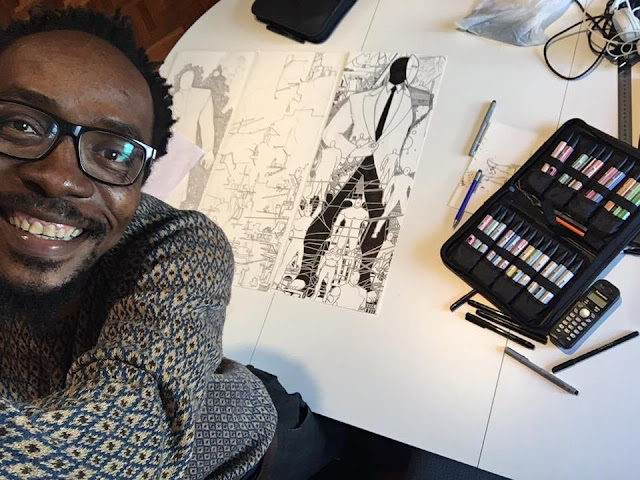 Index on Censorship welcomes the news that charges against cartoonist Nsé Ramón Esono Ebalé, who frequently uses his art to lampoon senior Equatorial Guinea government officials, have been dropped.

“This is wonderful news and we urge the authorities in Equatorial Guinea to release Ramon without delay. The charges against him were clearly spurious and we call on the government of Equatorial Guinea to confirm that Ramon will be free to travel,” said Joy Hyvarinen, head of advocacy at Index on Censorship said.

Esono Ebalé, who had been living abroad since 2010, has been held in prison in Malabo, Equatorial Guinea’s capital, since his arrest on September 16, 2017. He was arrested while he was in the country to request a new passport.

Three days after Esono Ebalé’s arrest, the state-owned TV channel ran a report alleging that he had been arrested for counterfeiting and attempting to launder approximately US$1,800 of local currency found in the car he was driving.

Esono Ebalé was not formally charged until 82 days after his arrest. This prolonged period – during which the investigating judge did not respond to three pleadings or motions submitted by his lawyers – called into question the credibility of the evidence.

It also appeared to violate Equatorial Guinean law, which mandates that a judge must charge suspects within 72 hours of arrest, unless the judge recognizes an exception.

The charge sheet alleged that an undercover agent, working on a tip, approached Esono Ebalé to provide change for a large bill and was given counterfeit money in return.

The charge sheet also stated that the head of the National Police testified regarding receiving information about Esono Ebalé’s alleged involvement in counterfeiting money and that the false notes were presented to the judge.

It included no information as to where the police found the money or other alleged members of the counterfeit ring.

The judge refused bail and ordered Esono Ebalé to pay a 20 million CFA francs (US$36,000) assurance to satisfy any fines the court may levy on him.

Cartoonists are frequently targeted by authorities for their work. Malaysian cartoonist Zunar has had his works banned, been barred from international travel and frequently arrested for his work.

Indian cartoonist Aseem Trivadi was arrested for sedition in 2012 for a series of cartoons that mocked the government, while Syrian cartoonist Ali Ferzat lives in exile after being brutally beaten by government forces.