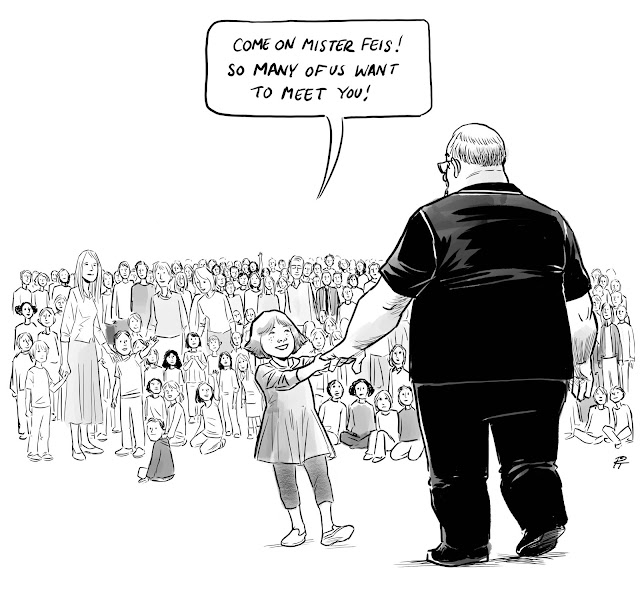 Eight days have passed since Pia Guerra’s “Hero’s Welcome” became an enduring memorial to the victims of a deadly school shooting at Marjory Stoneman Douglas High School in Parkland, Fla.

The cartoon shows Aaron Feis, a school football coach, being welcomed by school shooting victims after he threw himself in front of students to protect them from gunfire.

In the cartoon, you can see children and teachers looking up at Feis in awe, one waving for his attention from the rear of a massive crowd.

They’re the souls of victims — not just of the Parkland shooting, in which at least 17 were killed, but of other incidents like the 2012 Sandy Hook shooting, which claimed the lives of 20 children and six educators.

The impact of “Hero’s Welcome” hasn’t settled in with Guerra yet — the cartoon was re-tweeted over 27,000 times from her own account, and data suggests it may have been seen by as many as 3 million people.

Guerra may not know the full extent of her cartoon’s reach. But she knows what drives her to draw.

“I keep thinking of that bit from The Avengers,” she said, describing a scene in which Bruce Banner becomes the Hulk.

Guerra, a Vancouver resident, was born in Hoboken, N.J., the daughter of a musician from Chile and a mother from Finland.

She moved around a great deal in her younger years, ending up in Vancouver as a teen.

She’s been drawing for as long as she can remember — working incessantly at a craft that many give up when they’re young.

“There’s something I’ve figured out about art, is that everyone can draw,” Guerra told Global News.

“Most people stop because someone tells them at a certain age, five, six, seven, that something they did was dumb or it didn’t look like they wanted in their heads.

Guerra was first drawn to comics at the age of 10, when a cousin left an issue of “X-Men” at her house.

When she reached her teen years, she would draw editorial cartoons for the school newspaper at Terry Fox Secondary School in Port Coquitlam.

“If there was a story on the news, I would draw something if I was feeling angry enough about it,” she said.

“For the longest time, I didn’t think that I was very good at it, because every time I drew something, it never looked like the cartoons you see in the papers.”

Guerra drew one of her earliest political images around her high school years.

Back then, an expensive painting had been purchased for display in the Vancouver Art Gallery around the same time that cutbacks were happening at women’s shelters.

Guerra drew a picture of a woman with a black eye and a child with her. The image showed them visiting an art gallery, with the mother saying, “Let’s go home soon, daddy’s getting home.”

“It was really crude, but that was my fumbling way to address this issue,” she said.

“We have this money for this crazy painting, but we don’t have enough money to help women get out of these really bad situations.”


As high school ended, she wasn’t totally sure what she would do next.

“But I had my art,” she said. “I had all these people saying this is something you can do as a career, so I decided to spend all my time doing that.”

Guerra spent the 1990s working as a comic book artist, as well as creating gaming manuals and doing storyboards for commercials. 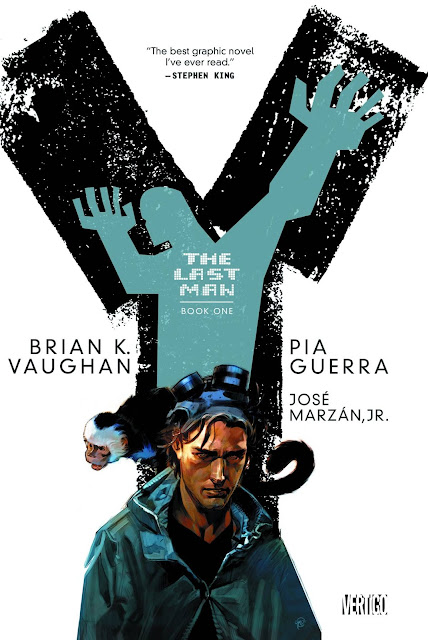 She would have her big break in 2001, when she co-created Y: The Last Man, a Vertigo Comics series about a post-apocalyptic world where every mammal possessing a Y chromosome has been killed.

Guerra kept on with political cartoons over the years.

She drew a cartoon to commemorate the 2015 terror attacks that were centered around the offices of the satirical Charlie Hebdo magazine in Paris. The attacks killed 17 people. 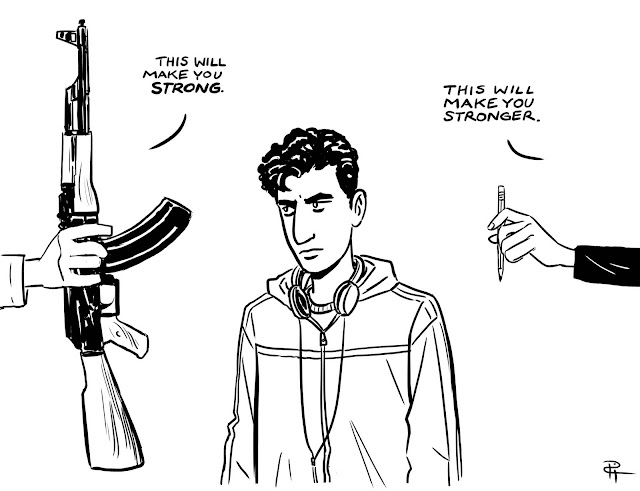 Guerra’s political work would only ramp up in subsequent years, reaching new heights with the election of U.S. President Donald Trump in 2016.

She attended the Women’s March on Washington in 2017.

There, she carried a sign she titled “Liar Liar,” showing Trump with his pants on fire. 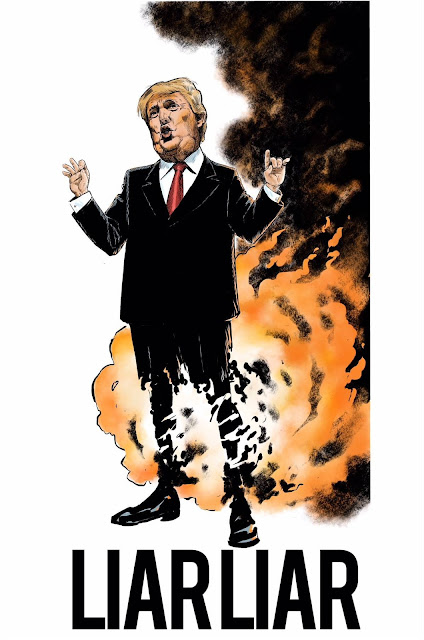 “Every 10 yards, people were stopping us to take pictures of the sign,” Guerra said.

At the end of the march, she put up the sign in Lafayette Park. A man approached her who said he had worked with Herbert Block, a Pulitzer Prize-winning editorial cartoonist.

He told Guerra she should keep doing work like this.

Her work would later be featured on The Nib, a U.S. comics publication by First Look Media.

Weeks after the march, she would produce “Big Boy,” a cartoon that showed Trump sitting on Stephen Bannon’s lap like a toddler. 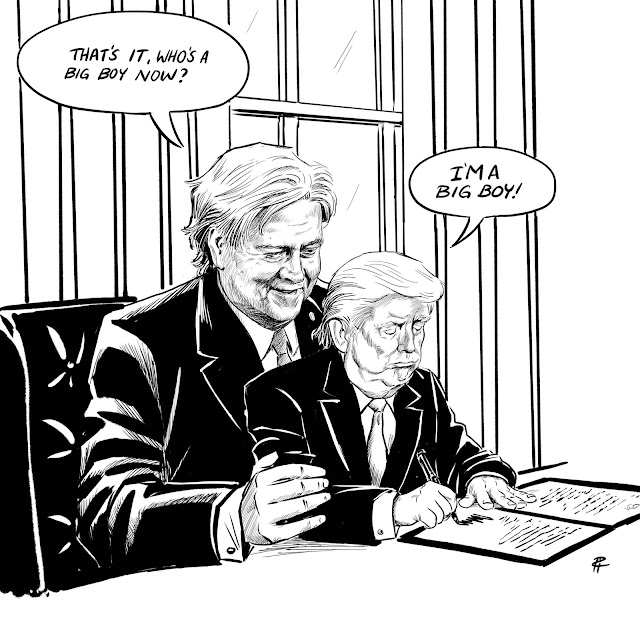 That image came after Bannon was accused of being the architect of a travel ban on people from seven Muslim-majority countries.

The cartoon was re-tweeted over 28,000 times and discussed on shows such as The View and Good Morning America.

But Guerra hasn’t restricted herself to U.S. politics.

In 2015, 18-year-old Alex Gervais jumped out the window of a Super 8 motel in Abbotsford; he was living there after his group home was closed.

Gervais’ story shone a light on oversight of children under the purview of B.C.’s Ministry of Children and Family Development (MCFD).

Guerra reflected on Gervais’ story through a cartoon that showed former B.C. premier Christy Clark smiling outside a Super 8 motel, with a broken window on the top floor. 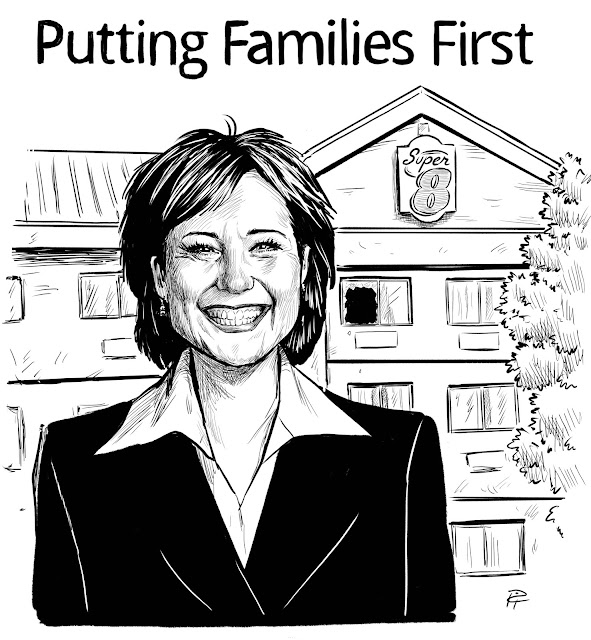 She drew it during the 2017 election to remind people that the provincial ministry had placed Gervais, and other young people, in hotels instead of in care.

“The idea that these kids were just left in hotels… God,” Guerra said.

“Hero’s Welcome” came out on Feb. 15, and since then it has featured in media all over the world, from The Washington Post to Buzzfeed.

And Guerra has continued to make an impact since then.

She drew “The Kids Are Alright,” inspired by Emma Gonzalez, a student at Marjory Stoneman Douglas High School who delivered a lengthy speech calling out politicians who she said were under the influence of the National Rifle Association (NRA). 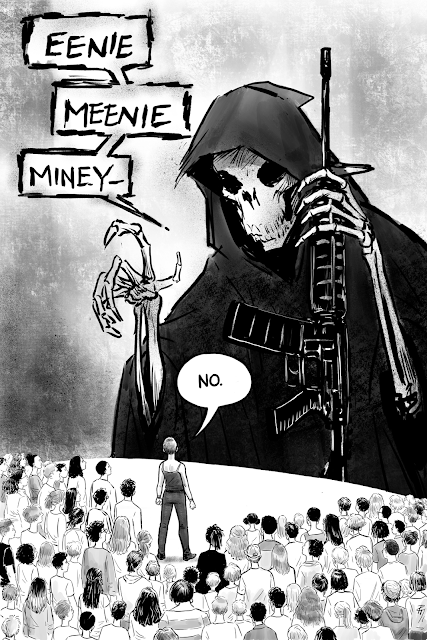 Political cartoons are important because people feel “distanced by the idea of politics,” Guerra said.

“We just stay at arm’s length of these issues, and we all think it’s far away,” she said.

A cartoon, Guerra said, makes it personal — makes it matter.