From The Irish Times. 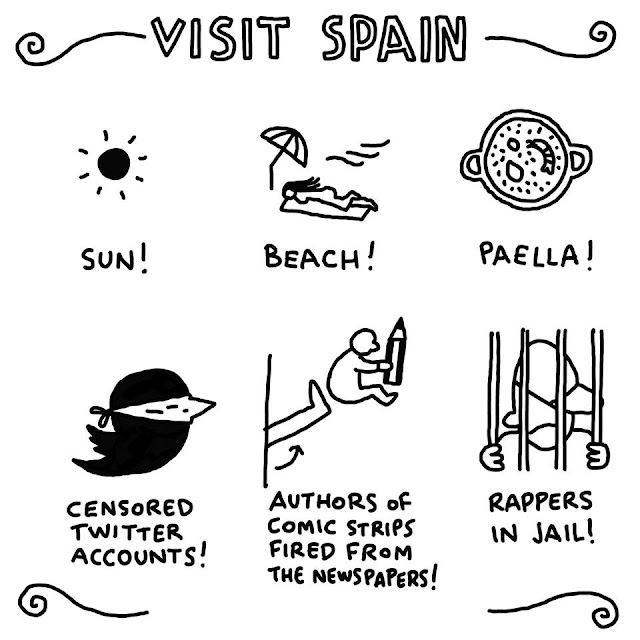 Edu Galán and Darío Adanti are sitting in the offices of satirical magazine Mongolia, in the basement of a shoe shop in Madrid’s Malasaña district, ruing the fact that a recent news story broke too late for them to put on their next front cover.

A few days earlier pop star Marta Sánchez had sung her own lyrics to the wordless national anthem during a concert in Madrid. The next day prime minister Mariano Rajoy and other politicians on the right fell over each other to tweet their admiration for Sánchez and her much-ridiculed patriotic verses.

“It’s a gold mine,” says Galán of the whole affair, laughing. “We’re living through a very entertaining time when it comes to satire.”

Sánchez’s antics with the national anthem are just the tip of the iceberg for Galán, Adanti and their two colleagues at Mongolia, Fernando Rapa and Pere Rusiñol.

Over the past decade Spain has been through an emotional rollercoaster: an economic boom ended, leading into a double-dip recession, while politicians, bankers and members of the royal family have been exposed as hopelessly incompetent or shamelessly corrupt.

In the meantime Catalonia’s failed recent bid for independence has seen a rebirth of Spanish nationalist fervour.

“If we’d done satire when we could have earned more money, in 2005, say, or in the nineties, nobody would have paid any attention,” says Galán. “Because when everything seems to be alright in a society it doesn’t need satire, it doesn’t need you to say ‘actually it’s not alright, there’s bad stuff underneath all this’.” 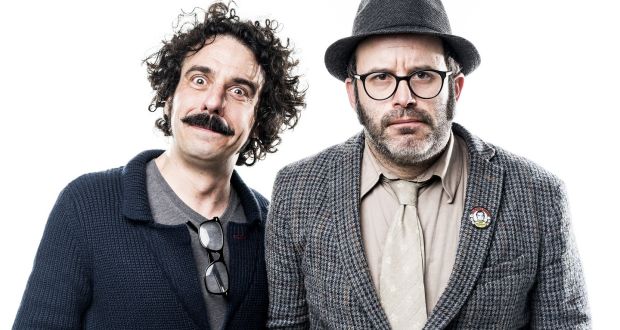 Adanti (47), who sports a Groucho Marx-style moustache, and Galán (37), whose dishevelled, unshaven appearance suggests he has only just got out of bed, may not look like conventional movers and shakers, but they have struck a chord in Spanish society and clearly see this as their vocation.

“Right now I wouldn’t recommend this to anyone, but we don’t know how to do anything else,” says Galán, opening a can of beer. “What’s more, I love pissing people off.”

Mongolia magazine went on sale in 2012, in the depths of Spain’s financial crisis. It is not a viable business on its own, but its founding quartet has expanded into publishing books, TV punditry and even the theatre, producing Mongolia, the Musical (“It’s a musical without music,” explains Adanti).

The magazine’s tone is risqué, irreverent, often infantile, and, although Galán and Adanti describe themselves as left of centre, politically indiscriminate.

“In Spain doing satire against Catholicism but not aiming at Islam makes no sense at all,” says Galán. “The same applies to the absolutely ridiculous aspects of our leftist movements.” 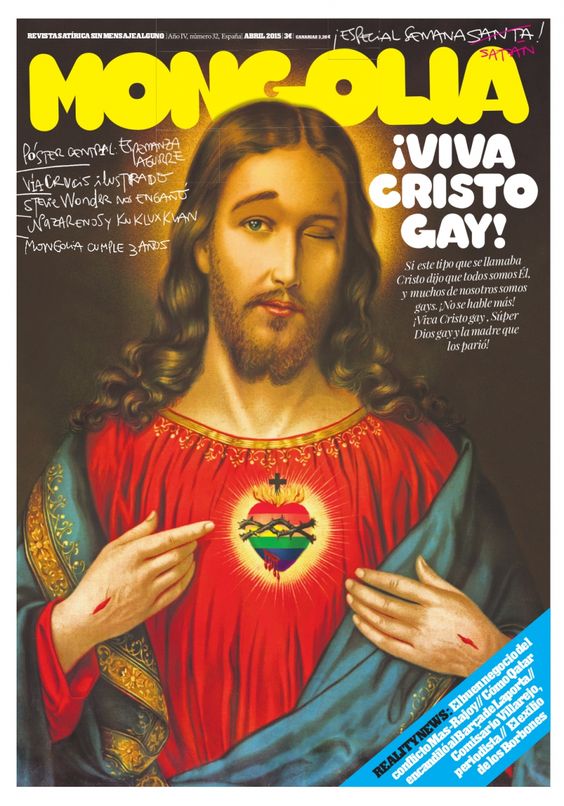 Recent editions have featured a gay Jesus on the front page, as well as leftist politician Pablo Echenique as a hapless Che Guevara, conservative politician Francisco Camps photoshopped as Hitler and, at the height of the recent Catalan crisis, Rajoy taking a selfie as Barcelona burned in an apocalypse behind him. 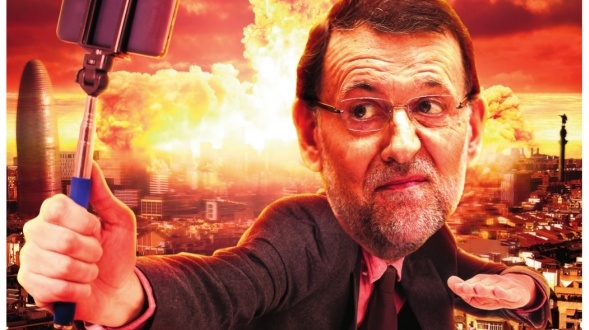 
“We can never stop being critical, satire is all about bothering everyone,” says Adanti, identifying “the idea of the nation, of race, of religion” as their favourite targets.

He also insists that the more satirical media a country has, the healthier its democracy. The quality of democracy in Spain has come under scrutiny lately due to its heavy-handed management of the Catalan issue, a litany of corruption scandals and its heavily politicised judiciary.

But Mongolia is not alone.

Its online-only rival, El Mundo Today, offers fictional news stories that give an absurdist spin on contemporary Spain. Some have such a po-faced ring of authenticity about them that they find themselves in the “real” news cycle.

That headline, in particular, goes beyond pure comedy, pointing a finger at the oft-questioned judiciary and highlighting the Spanish media’s obsession with foreign coverage of their country.

“When it comes to content, having really juicy issues like constant corruption scandals or the abdication of the king [in 2014] has made things easy for us,” Xavi Puig, of El Mundo Today, told EFE news agency.

But amid all the laughter Spain’s satirists have to tread carefully given how active the country’s courts are in pursuing supposedly offensive content. 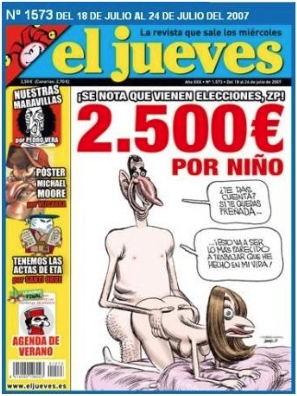 The magazine El Jueves was fined (in 2007) for publishing a sexually explicit cartoon of King Felipe VI and Queen Letizia.

Mongolia is facing a €40,000 lawsuit by bullfighter José Ortega Cano for portraying him as an alien. 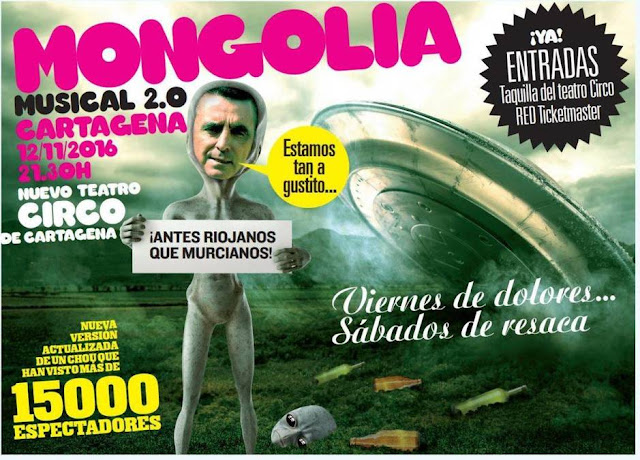 Meanwhile, in three separate cases two rappers and a hip-hop group have been given jail sentences over the last year for their lyrics, and in February a man who posted a picture on social media of his face superimposed on the body of Jesus was fined several hundred euro.

“In the 1990s we had the same laws as now, but precisely now, when we have all this repression, we’re seeing a surge in satire,” says Adanti.

In such a context there is no doubt that Adanti, Galán and other satirists in Spain have to be deeply serious about their trade.

“Something that offends me enormously is when people treat you like an idiot, saying: ‘You’re crazy’, and so on,” says Galán. “No, not at all – to do what we do, to come across as a rude idiot, you actually have to be really clever.”

Spanish satirical magazine, Mongolia, has been told by court to pay 40,000 Euros to bullfighter satirically portrayed on poster. Will appeal.
Published by Bado at 12:00 AM