Matt's 30th Anniversary at The Telegraph 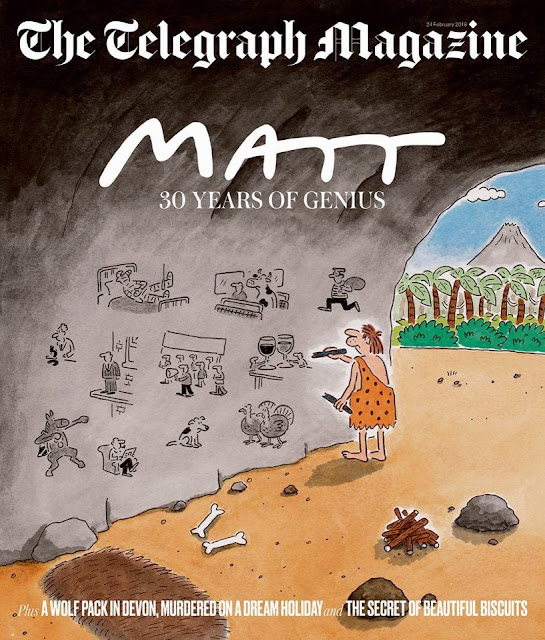 The Duke of Edinburgh has paid tribute to the “genius” of the Telegraph’s Matt, as Britain’s leading public figures celebrate the cartoonist’s 30th anniversary at this newspaper.

The Duke, a collector and long-term supporter of the art form, expressed his admiration for Matt in a personal message, in which he praises his “ability to think of wonderfully appropriate swipes at the idiocies of contemporary life”.

He today leads tributes to the “30th birthday” of Matt as a Telegraph cartoonist, joined by Theresa May, every living former Prime Minister, Britain’s finest broadcasters, writers and best-loved figures from the arts.

Mrs May, the Prime Minister, sent her personal congratulations to Matt for helping politicians to “laugh at ourselves”, while David Cameron revealed he enjoyed one cartoon poking fun at him so much it is mounted on the wall of his daughter’s bedroom.


Sir John Major praised his talent for capturing each moment "magnificently" with "gentle, understated humour", as Sir Tom Stoppard admitted: "Matt has entered my brain. Sometimes on reading a news story I wonder idly, 'What would Matt do with this?'"

The Duke of Edinburgh, the patron of the Cartoon Museum whose retirement from public duties at the age of 96 this year was marked with a Matt cartoon reading “Unveil your own damn plaque”, has sent a hand-signed congratulatory message. “Successful cartoonists do not only need to be able to draw, they have to think of subjects to illustrate,” he said.

“Matt has shown that he has a genius for both, as well as the ability to think of wonderfully appropriate swipes at the idiocies of contemporary life.”

Matt Pritchett, who has been known under the pen name of Matt since February 1988, has created more than 8,000 Telegraph cartoons, each capturing the absurdities of everyday life with sharp humour and a gentle touch.

The Telegraph will be celebrating “30 Years of Matt” with a special Saturday magazine edition featuring an interview with the man himself, with a four-page souvenir cover wrap showcasing 90 of his favourite cartoons on Monday.

Chris Evans, Telegraph editor, said: “In an unpredictable world, our readers know that Matt’s cartoon can be relied on to lift their spirits and make them smile. All of us at The Telegraph are delighted to celebrate 30 incredible years of cartoons with him.”

Jeremy Corbyn, the Labour leader, was also invited to join the anniversary celebrations. His team politely declined, saying none of the Matt cartoons they had seen about Mr Corbyn were funny.
Published by Bado at 12:00 AM