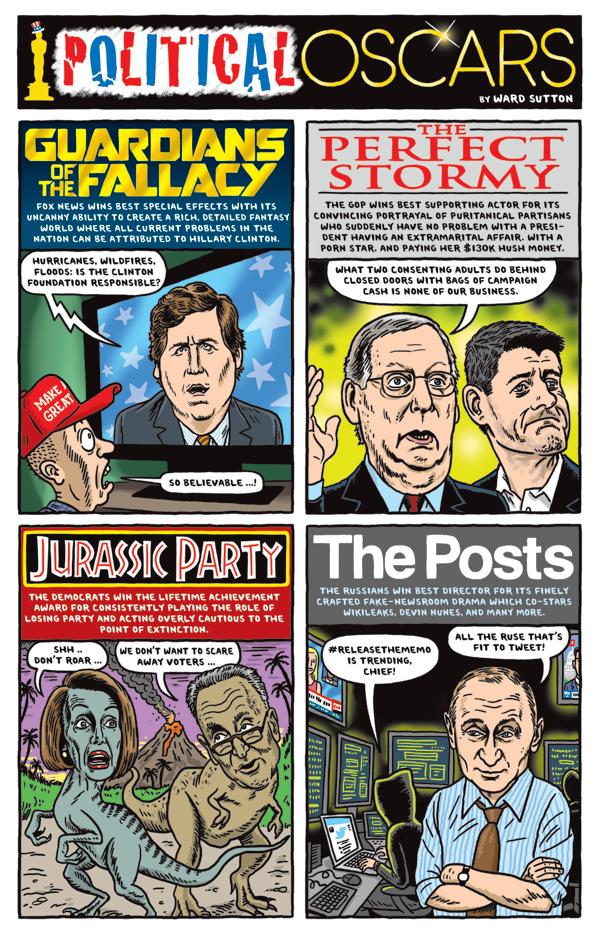 The Herb Block Foundation has announced that Ward Sutton has been named the winner of the 2018 Herblock Prize for editorial cartooning.

Ward Sutton has been creating biting editorial cartoons for The Boston Globe since 2008. He experiments with size and format, often producing multi-panel cartoons that can read like a graphic novel. In 2010, his full-page “Tea Party Comics” won a gold medal from the Society of Publication Designers.

Sutton has also created cartoons for The New Yorker, The Village Voice, The New York Times, The Nib, In These Times, GQ, The Nation, Time, TV Guide, Rolling Stone, Fusion, MAD Magazine, and many more. 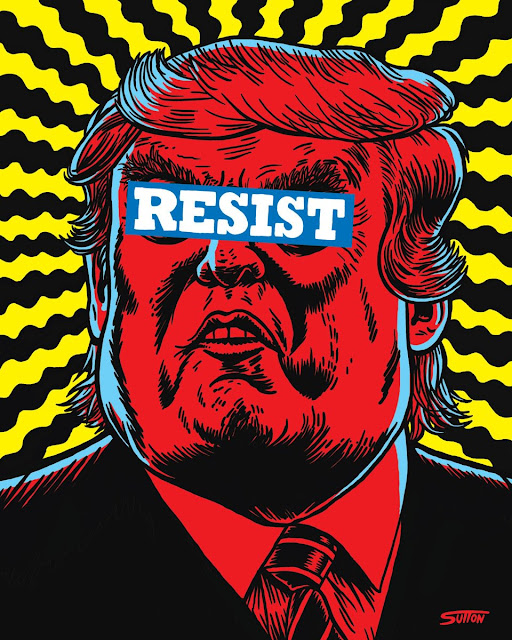 Alarmed by the incoming Trump administration, Sutton drew a “RESIST” poster image and distributed it for free online in 2017. It was downloaded, printed, carried in marches all over the world, and later chosen by American Illustration in its annual competition.

Since 2006, Sutton has semi-secretly been the man behind Stan Kelly, the (fake) editorial cartoonist for the satirical weekly The Onion. His book, Kelly: The Cartoonist America Turns To (TM) was published in 2016. 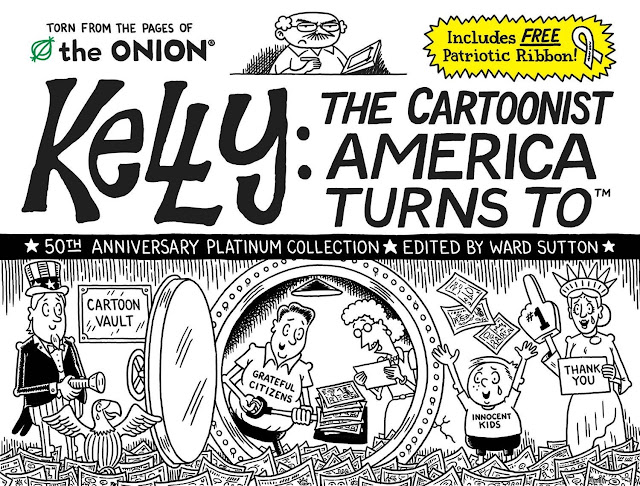 In addition to cartooning, Sutton has created posters for Broadway, the Sundance Film Festival, and musicians such as Beck, Radiohead, Phish, and Pearl Jam.

He has designed, directed and/or produced animation for HBO, Noggin and Comedy Central.

Born in Minnesota, Sutton got his start cartooning for the Edina Sun community newspaper when he was in middle school. He continued at Edina High School’s Zephyrus and St. Olaf College’s Manitou Messenger before launching his first professional political strip, “Ward’s Cleaver,” in the Minneapolis alt-weekly, The Twin Cities Reader.

Since then, he has lived in Seattle, New York City, and Costa Rica before finding his current home with his family in Fort Collins, Colorado.

The Herblock Prize is awarded annually by The Herb Block Foundation for “distinguished examples of editorial cartooning that exemplify the courageous independent standard set by Herblock.” The winner receives a $15,000 after-tax cash prize and a sterling silver Tiffany trophy. Ward Sutton will receive the Prize on May 9th in a ceremony held at the Library of Congress. Scott Simon, Peabody Award-winning correspondent and host of Weekend Edition Saturday on NPR, will deliver the annual Herblock Lecture at the awards ceremony.