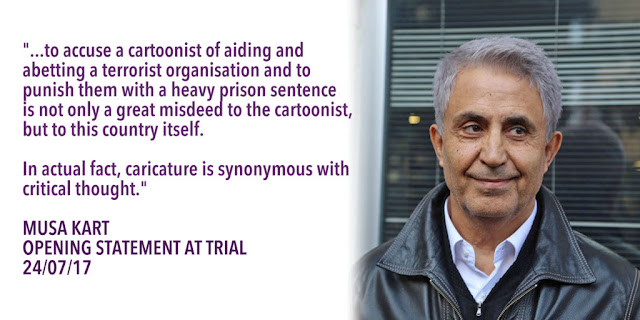 All the Cumhuriyet co-accused sentenced to less than five years must serve their prison terms after the appellate court rules the 2017/18 trial lawful.

CRNI is distressed and outraged by the court ruling in Ankara earlier today. Musa’s own reaction was swift and betrayed a degree of resignation to his fate:

“Yes, I am going back to prison. Look after yourselves…”, he wrote in the Tweet above.

As long-time readers of CRNI’s output will recall, Musa Kart is the 2005 recipient of our annual Courage in Editorial Cartooning Award and the 2018 laureate of The International Press Drawing Prize of the City of Geneva & Cartooning for Peace Foundation.

His trial and that of a dozen staff from the Cumhuriyet newspaper came as part of the widespread and much-publicised crackdown on press & media in Turkey in the period after the attempted coup of 2016.

Musa’s opening statement at trial was a blistering and funny critique of Recep Erdoğan’s regime and the absurd notion that opposition politics is tantamount to support of terrorism.

His eventual charges were a case of “third time’s the charm” for the thin-skinned president who had already put the cartoonist in the dock over satirical cartoons in 2005 and 2014.

CRNI and many other freedom of expression organisations chose to maintain silence as long as Musa’s appeal was in train for fear of outside interventions jeopardising his chances of success.

With the termination of hearings and no alternatives left to pursue expect calls for his release and acquittal to be given full voice once again.

Assuming his sentence is served in full he will be inside for three years and nine months. It is worth remembering his wholly illegal and unjustified pre-trial detention amounted to nine months from November 2016 through July 2017.

The recent global assessment by Freedom House gives Turkey just 31 out of 100 on its scale of assessment and the deterioration there is cited as part of an identifiable and worsening trend of democratic retreat around the world.

For a sense of the industrial scale upon which the Turkish authorities continue to persecute and prosecute critical voices within the press, arts and academia one need only glance at Expression Interrupted’s exhaustive calendar of court proceedings.

CRNI condemns this ruling in the strongest possible terms and once again calls upon the international community to apply diplomatic pressure on Turkey where and whenever possible and for as long as its grand project of suppression and intimidation continues.
Published by Bado at 12:00 AM