The PEI Guardian adds de Adder and MacKinnon to its pages

From the PEI Guardian. 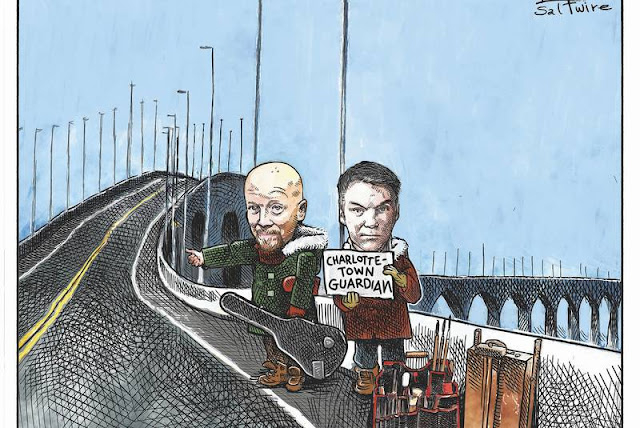 The (PEI) Guardian is adding two of Canada’s top cartoonists and their opinionated snapshots, from lighthearted to biting offerings, to its editorial pages.

“Bruce MacKinnon and Michael de Adder are two of the best cartoonists in this country, and they are based right here in Atlantic Canada,’’ said Wayne Thibodeau, managing editor of The Guardian. 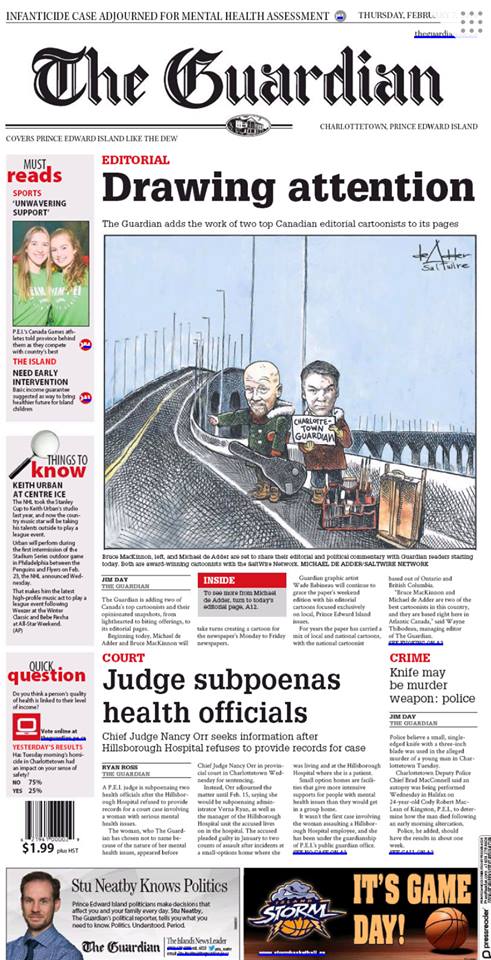 “Both MacKinnon and de Adder reach millions of readers every week, making them two of the most read cartoonists in Canada. Now, they will be sharing their editorial and political commentary with readers across Prince Edward Island.’’

De Adder has his work syndicated in North America through Artizans.com.

He visits P.E.I. about twice a year but concedes he will need to pay closer attention to what is making news in the province now in order to generate cartoons that hit home specifically with Prince Edward Islanders.

“Well, there will be the odd Anne of Green Gables joke made,’’ he quipped. “The only time that I am aggravated (about P.E.I.) is the weather. I’m annoyed by trying to get the ferry over there.’’

De Adder said he tries to be in tune with what rattles Canadians when he draws up two cartoons each day.

“To be honest, I am really going for what I think people are talking about at the water cooler,’’ he said. “Generally what pisses off people is pissing me off, too.’’

He said his main goal is to entertain the reader, but when creating an image in response to a tragedy like the Humboldt bus crash, he seeks to be poignant. 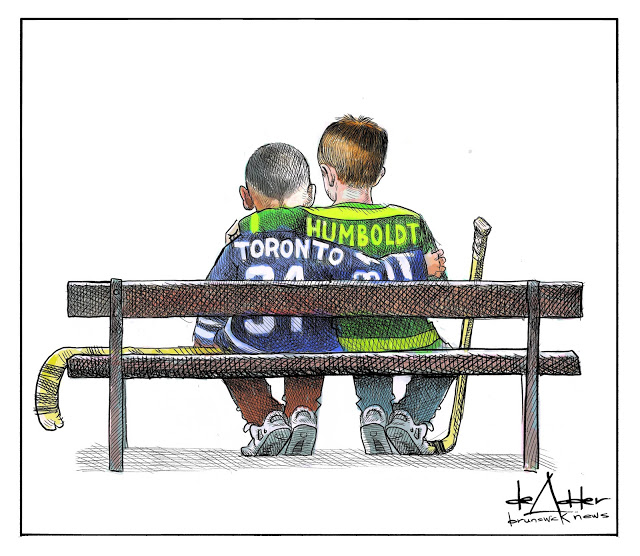 MacKinnon gets up at 5:30 a.m. and is into the newspaper within an hour.

He says the story dictates the tone of his cartoon.

“You try to come up with an angle that makes it unique and speaks to people in some way,’’ he said. “If the story evokes an angry response in the average person, it will probably evoke that with me.’’

While his provincial focus for years has been on Nova Scotia, he drew plenty of attention to the spending controversy of a controversial P.E.I. senator. 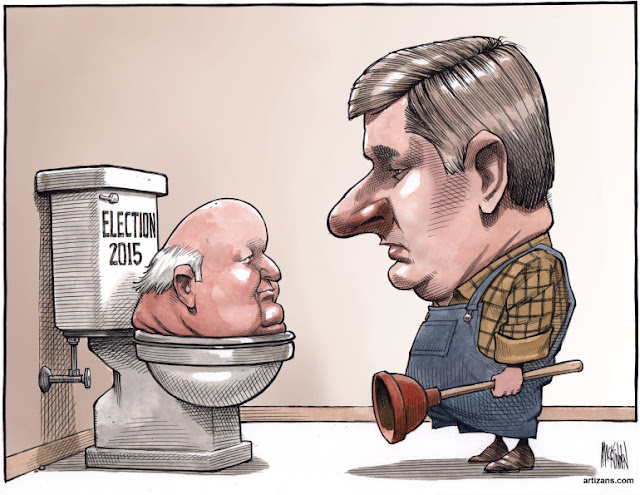 “I sharpened many a pencil on Mike Duffy,’’ he said.

MacKinnon, who has won numerous national awards for his work, calls himself a cartoonist, a satirist and a caricaturist.

He spends on average four to five hours a day drawing up a single cartoon.

“I always feel pretty down on myself if I put a drawing in the paper that I don’t like or it looks like I didn’t put a lot of effort in it,’’ he said.

MacKinnon, who like de Adder has his work syndicated through Artizans.com, said he is looking forward to being published more widely in local papers in Atlantic Canada like The Guardian.


First paid as a cartoonist at age 14, drawing a weekly cartoon for The Casket in his hometown of Antigonish, N.S.
Began drawing weekly cartoons for The Chronicle Herald in Halifax in 1985.
Won several National Newspaper Awards including the NNA Journalist of the Year award for 2014.
His cartoon depicting the assault on Lady Justice during the confirmation hearings for U.S. Supreme Court nominee Brett Kavanaugh went viral and was added to the archives of the United States Library of Congress.


Started off wanting to be a painter but said he “sort of accidentally became a cartoonist”.
While at Mount Allison University, he began drawing cartoons for the school’s student newspaper.
He started his career working for The Coast, a Halifax based alternative weekly.
Landed a fulltime job in 2000 at the Halifax Daily News.
Past president of The Association of Canadian Editorial Cartoonists and is on the board of the Cartoonists Rights Network.