From the CBC and Global News. 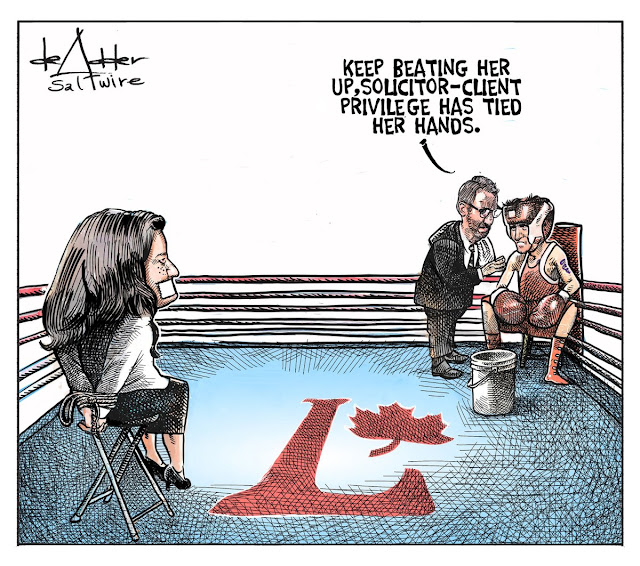 His decision was sparked by a cartoon he posted last week on the SNC-Lavalin affair.

"You know your job as a cartoonist is to make your point — not make a point you didn't intend," de Adder said.

The cartoon, posted Feb. 15, 2019, is set in a boxing ring and it shows Jody Wilson-Raybould in one corner with tape over her mouth, tied up and sitting on a stool.

In the other corner of the ring is Prime Minister Justin Trudeau, dressed ready to box.

The crux of the SNC-Lavalin affair is a question of whether the prime minister pressured Wilson-Raybould — who was attorney general — to resolve the corruption and fraud case against the Montreal-based company.

Wilson-Raybould would not comment publicly on the issue because she said she is bound by solicitor-client privilege.

"The intent of the cartoon was not to attack [Jody Wilson-Raybould] — it was intended to attack the Liberals," de Adder said.

But many online critics did not interpret the cartoon as intended.

Some on Twitter thought de Adder was trying to make a joke out of violence against women and even encouraging it.

Wilson-Raybould is a descendant of the Musgamagw Tsawataineuk and Laich-Kwil-Tach peoples. 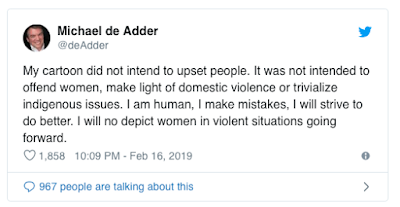 He said there is always conflict in politics and said an effective, visual way to show it in a cartoon is through violent imagery.

"I'll tackle it as I go. I'm not saying there won't be a female politician throwing a punch ... it's going to be hit and miss for me, but I'll strive to do things slightly differently," he said.

But he still plans on creating more cartoons about SNC-Lavalin and Wilson-Raybould.

He said the goal of a political cartoonist is to get as close to the line as possible, if not over it once in a while.

"It doesn't mean my cartoons are going to change very much," he said. "It just means that I'm going to make the same point a different way. You know life goes on. I'll just be subtle differences. I'll still get into trouble." 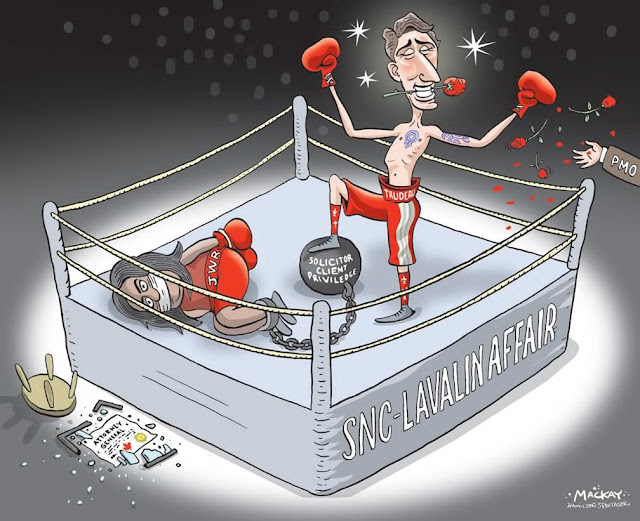 Hamilton, Ont. cartoonist Graeme MacKay, meanwhile, released a nearly identical cartoon of Trudeau and Wilson-Raybould inside a boxing ring together, with the former justice minister tied and gagged while the prime minister holds his arms up in victory.

MacKay’s cartoon shows Wilson-Raybould on the ground with a ball and chain around her feet reading “solicitor-client privilege.”