From the Northwest Labor Press. 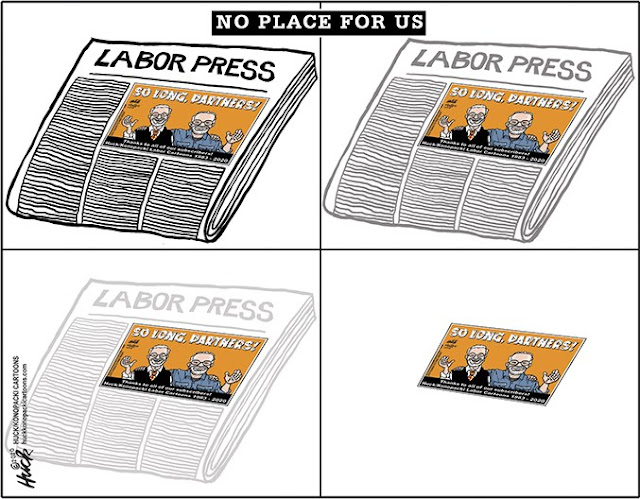 For more than three decades, cartoons from Huck/ Konopacki have appeared in the Northwest Labor Press. So it came as a shock to learn last month that labor cartoonists Mike Konopacki and Gary Huck are closing down their cartoon syndicate.

At its height in the early 1990s, the pair were sending out monthly packets of cartoons to 120 labor newspapers across the United States and Canada, but that has dwindled in recent years as unions shrank and merged and many labor papers ceased to publish.

[This newspaper has been a fortunate exception: Because of strong support from our community of local unions and pro-union business advertisers, the Northwest Labor Press is now in its 120th year and is in no immediate danger of becoming unsustainable.]

Huck and Konopacki’s cartoon careers also coincided with the decline of the political cartoon: In the year 1900, there were 2,000 daily newspaper editorial cartoonists in the United States; today there are fewer than 40.

Huck, now retired, was for many years was employed full time as a political cartoonist for the United Electrical Workers (UE) union.

Konopacki got his start drawing cartoons for the University of Wisconsin student paper, and in the late 1970s started drawing labor cartoons between shifts as a bus driver.

The two met at the 1979 convention of the Association of American Editorial Cartoonists and began operating their syndicated cartoon service in 1983.

Wrapping up their cartoon syndicate means an end to their commitment to produce and distribute a dozen or more cartoons a month for labor union newspapers.

But Konopacki says the two will still draw occasional cartoons and post them on their web site— HuckKonopackiCartoons.com — they don’t know what else to do, he says.