Rachel Cheung in The Nation.
As the city braces for a new law that could stifle free speech, local artists are still spurring on the protest movement.
In a career spanning nearly four decades, four Hong Kong chief executives, and four Chinese Communist Party leaders, Wong Kei Kwan has traced the arc of history as well as the contours of every leader’s face.

The political cartoonist better known by his pen name, Zunzi, is a master of caricaturing Hong Kong’s political elite.
One of a handful of editorial cartoonists in Hong Kong who still have a daily column in local print newspapers (in fact, he has two), the 65-year-old with salt-and-pepper hair speaks in the same colorful analogies you find in his cartoons, even when he’s discussing a matter as grim as the new national security law that the Chinese government is set to impose on Hong Kong, designed to criminalize dissent. 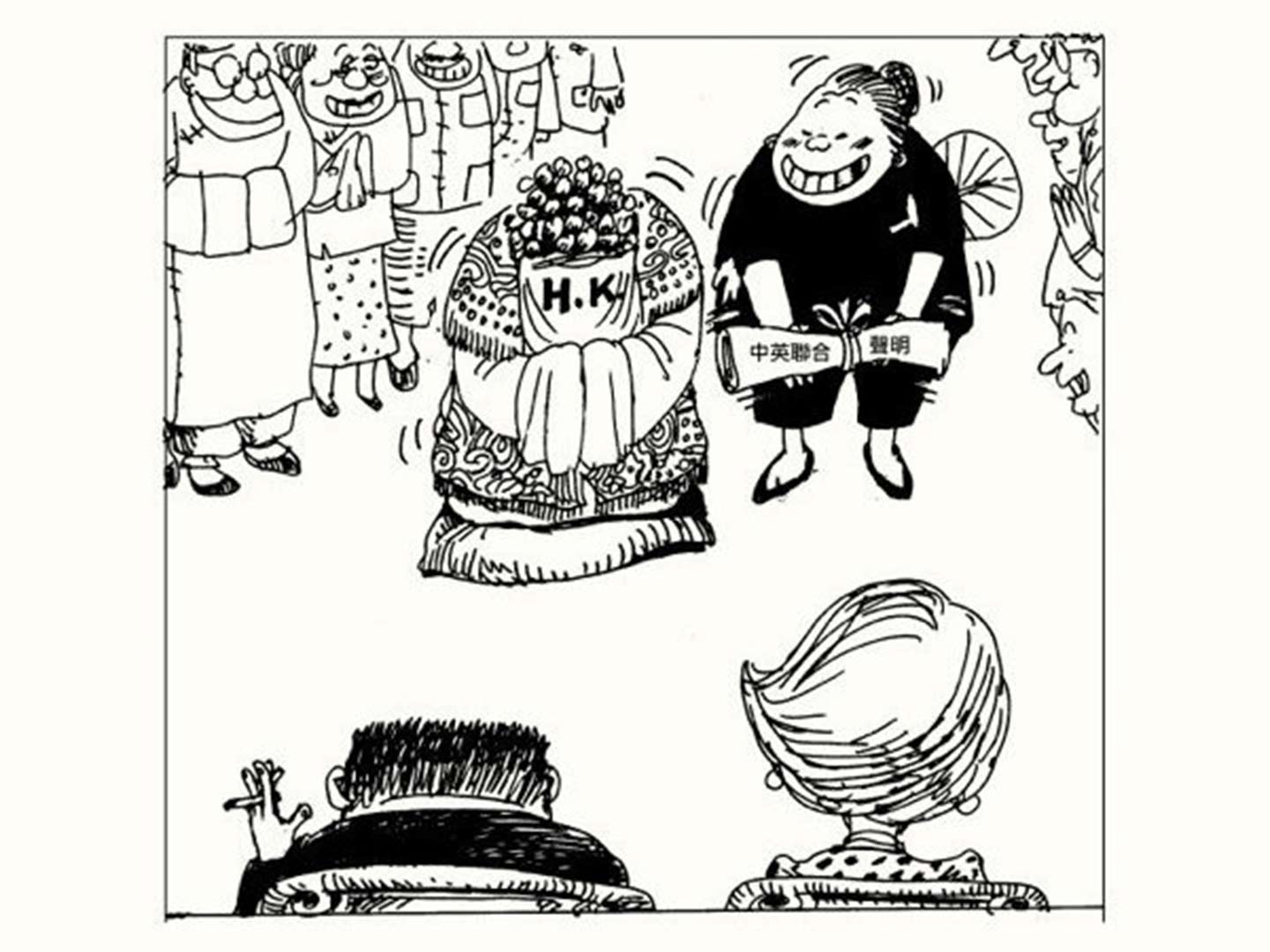 In 1984, while Sino-British negotiations over the Hong Kong handover were still ongoing, local cartoonist Zunzi depicted the city as a bride being pushed into an arranged marriage. (Zunzi)
“It’s like a guillotine that may fall anytime. That is what we find most unacceptable. Like Monkey King’s circlet, which can be tightened whenever they chant the sutra,” says Wong, referring to the crown used to tame the unruly creature in the classic Chinese novel.

From traditional newspaper editorial cartoons to the newer forms of protest art that circulate online and are posted at makeshift Lennon Walls across the city, political cartooning is an indispensable avenue for dissent and political expression in Hong Kong.

In mainland China, distorting the image of the country’s leader or vilifying Chinese lifestyles would be considered a criminal offense; anything deemed incompatible with the Chinese Communist Party’s values will be scrubbed from the Internet.
In Hong Kong, people are—for now—still free to illustrate their scathing opinions of those in power. Even as self-censorship tightens, this creative outlet has been left relatively untouched.
Beijing announced the new national security law last month, bypassing Hong Kong’s local government. It will proscribe seditious and subversive activities, and has sparked growing fears that Hong Kong’s freedom of expression will come to an end.

But cartoonists across generations are still refusing to be silenced, confronting the new reality in the way they know best: Where words fail, cartoons step in.

Wong’s work, which now appears in the Chinese language newspapers Apple Daily and Ming Pao, tends to be uncannily prescient.
In 1984, years before the British colonial government handed over Hong Kong to China in 1997, he published a cartoon depicting Hong Kong as a bride, forced into an arranged marriage with no say over her fate. “Now having married into an aristocratic family, we are probably worse off. An abused wife or servant,” he says. 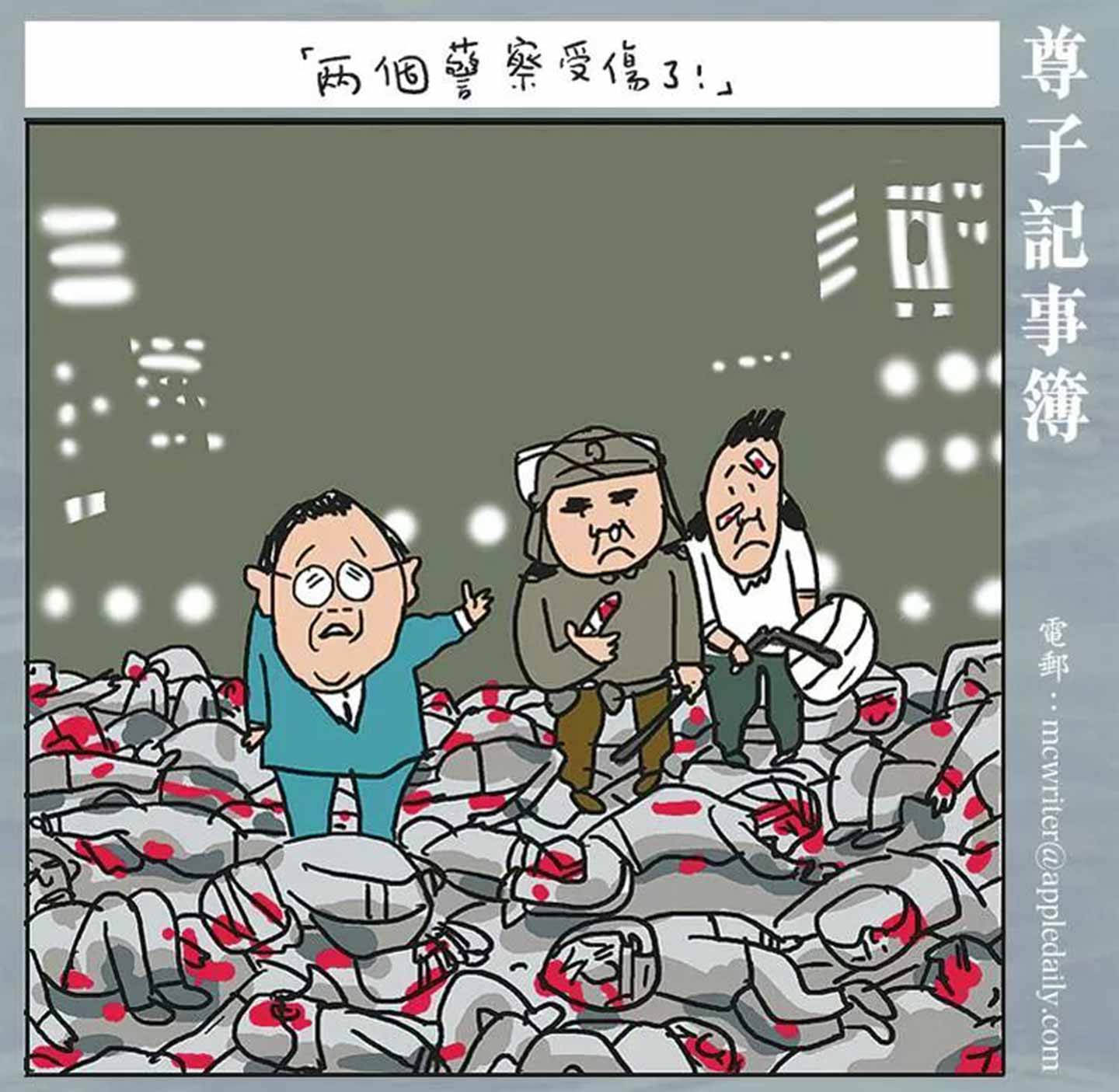 “Two police officers are injured,” 2014. In this prescient piece, Zunzi pointed out the power disparity between the police and protesters. (Zunzi)
He acknowledges the growing threat to freedom of speech, but he believes that the details of the new security law are not yet set in stone. For now, he remains unfazed: One of his most recent cartoons, published in Ming Pao, shows Chinese President Xi Jinping sitting naked on a throne.
“The warning that we would lose our freedom to draw has been repeated for 20 years,” says Wong. “However, it depends not on a few cartoonists or a newspaper, but the social atmosphere.
Whether the commentary is in the form of cartoons or text, it is supported by the collective power of society.”

It is precisely this collective power that allows illustrator Ng Kap Chuen, aka Ah To, to shake off the sense of foreboding.

The 37-year-old has a massive following on Facebook and a weekly column on Yahoo News, both digital platforms that have yet to be suppressed in Hong Kong by China’s iron fist. But he knows well that self-censorship creeped into Hong Kong long before the new law was introduced, with publishers and institutions steering clear of material to which they assumed the Chinese government would object. 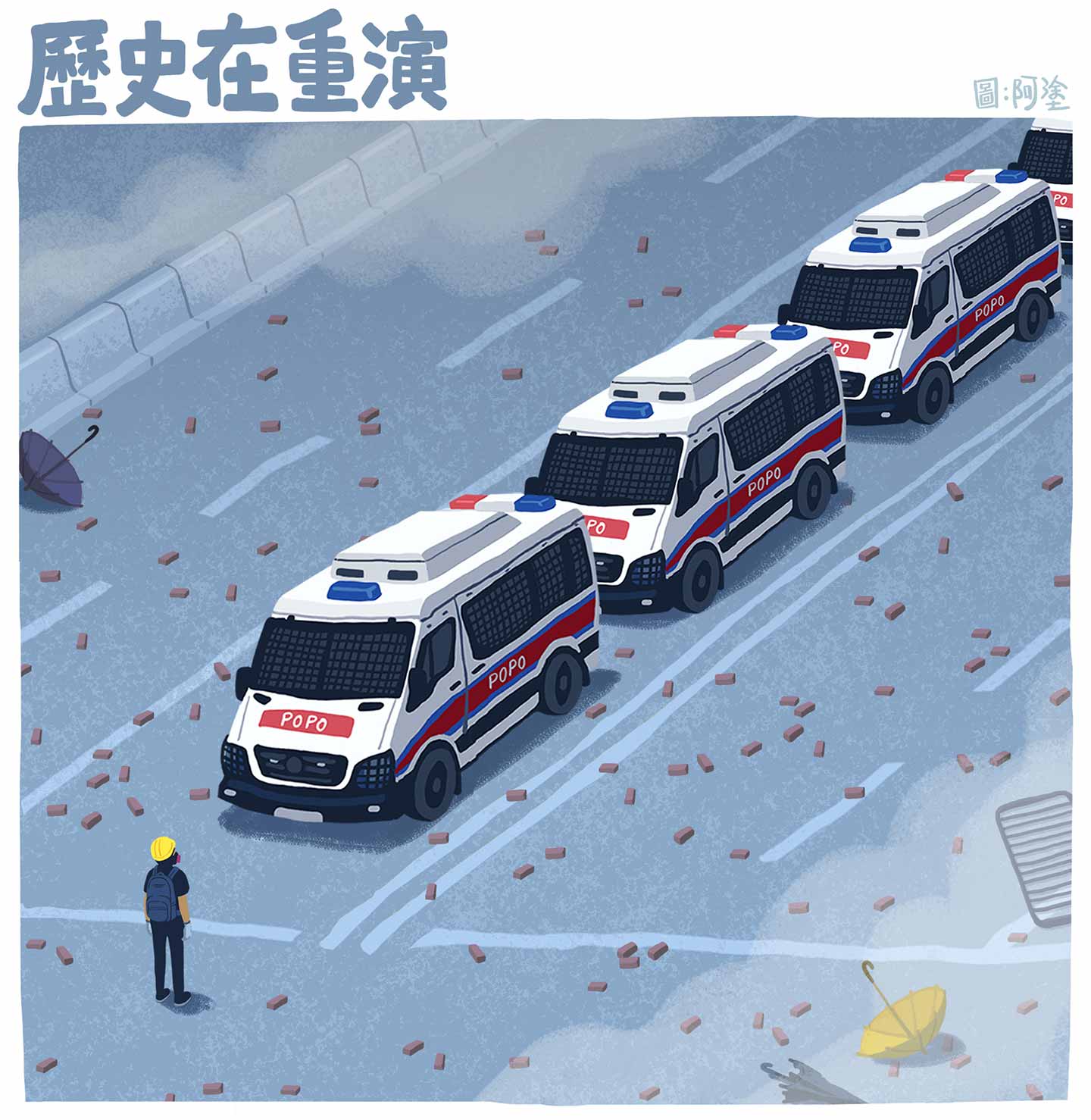 “History is repeating itself,” 2019. This work references the iconic “tank man” photo from the 1989 Tiananmen Square protests in Beijing. (Ah To)
Ng has been drawing cartoons since 2010, publishing them on local Internet forums. Three years later, he ditched his job as a graphic designer in advertising to become a full-time independent illustrator.
When he was about to publish his first book in 2016—a collection of comics featuring the daily lives and culture of Hong Kong people, using his trademark animal characters—his publisher told him to remove the strips with references to Xi Jinping and the Chinese national flag.
The incident sent a chill down his spine: His publisher, Ming Pao Publications, is a subsidiary of a media conglomerate that also owns the newspaper Ming Pao. He says now that he never expected an institution he deemed pro-democratic to self-censor out of concerns over what he calls “imaginary laws.”

Ng fought to keep the draft intact and was eventually able to find another publisher for the book. He stands behind his decision today, even if the price he has to pay may soon be far bigger than losing a book deal. “When I draw, I ask myself if it is something I truly believe in, and if the answer is yes, that alone is enough,” he says. “I don’t think about whether or not it will land me in jail.”

He felt the most frustrated a few years back, when Hong Kong’s civil society slipped into despair after the Umbrella Movement of 2014 failed to obtain any democratic concessions from the authorities. “I also published political artworks then, but there was absolutely no reaction from the public,” he says. “For me, that’s scarier than the national security laws.”

In contrast, the movement that began a year ago, in June 2019, felt “warm and fuzzy” to him because of the solidarity among the community and the explosion of creative output from fellow protesters.
Since the current protests began a year ago—in response to a bill that would’ve allowed Beijing to extradite people from Hong Kong for prosecution in China—Ng has been putting his pen on the city’s pulse and drawing every other day, occasionally in tears.

“It is why I can stay calm despite the legislation,” says Ng. “I know even if I die or end up in jail, there will still be many more out there, supporting the movement.”

Among the torchbearers out there—or more specifically, on Instagram—is the anonymous artist who goes by the name Harcourt Romanticist. His oil painting Our Vantage, inspired by the work of French artist Eugène Delacroix, has become the defining image of Hong Kong’s revolution.
Depicting young protesters in gas masks and helmets, one waving a black bauhinia flag, it was circulated on social media, decked local players’ islands on the video game Animal Crossing, and made into large banners seen at demonstrations.

Born and raised in Hong Kong, the artist prefers to remain anonymous, consenting only to an interview over Instagram direct messages. He says that he felt bitter yet powerless against the Hong Kong Police Force’s brutality and state crackdown, and took to the canvas to record his emotions.

“Political artworks serve to inform, unite, empower, and mobilize the public during the protest movement in Hong Kong,” says the artist.

Wong and Ng also feel that their work could be threatening to repressive states. 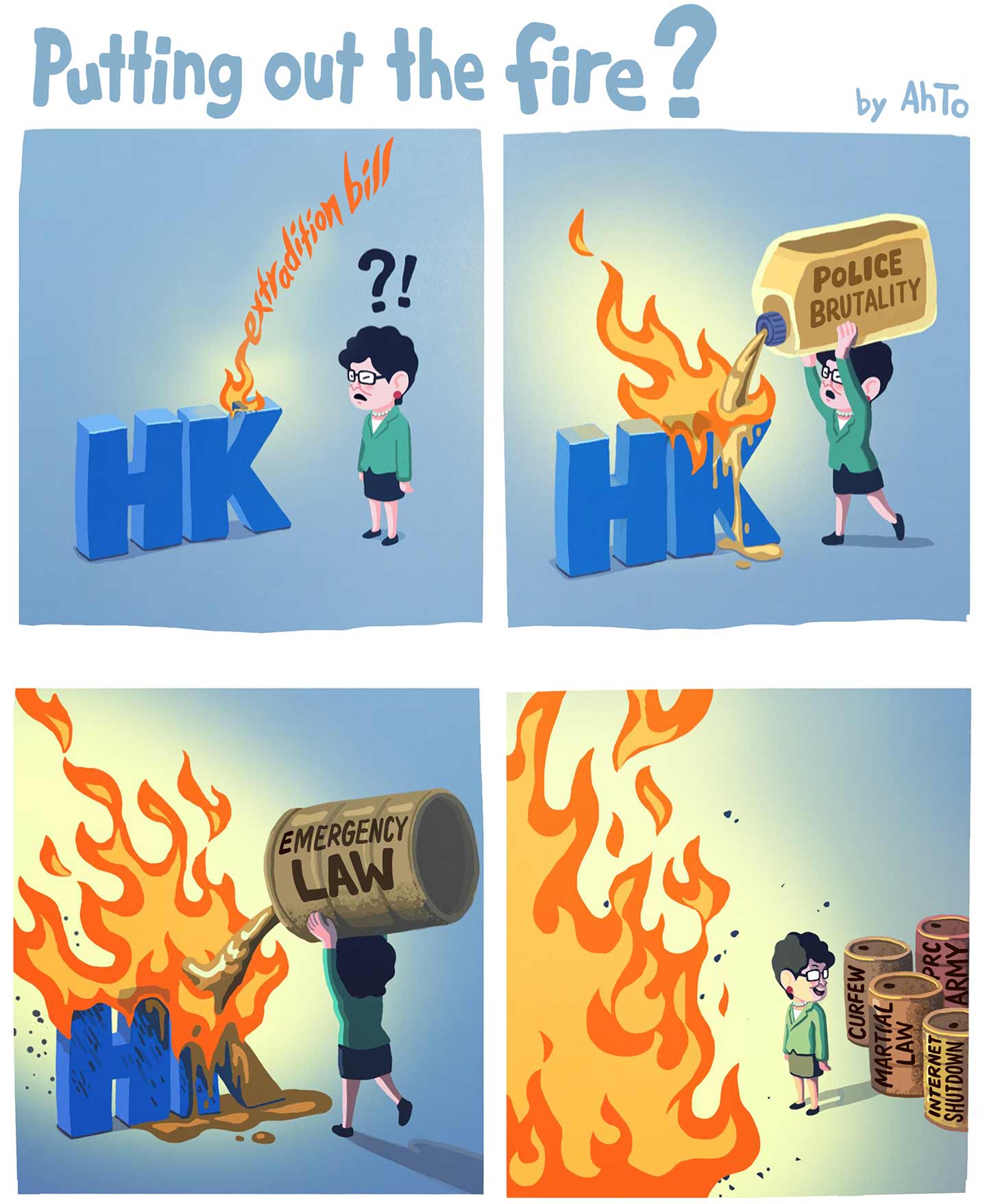 “A regime rules by fear,” says Wong. “How they present themselves, under what lighting, and even what they wear are all tactics that serve to intimidate. When you mock them and make them look funny, it breaks the spell.”

“Satire highlights the absurdity of the government and exposes their lies,” says Ng.

The national security law, the details of which are still unknown, is expected to take effect by September, ahead of Hong Kong’s elections. The situation is bleak—but at every turn, Hong Kongers have put up a staunch resistance.
Despite a ban on large gatherings, protesters have continued to risk arrest and gathered in flash mobs to make their grievances heard.

While the authorities banned the annual June 4 vigil marking the anniversary of the Tiananmen Square massacre for the first time, on public health grounds, thousands of people defied the ban.
In a symbolic move, they stepped over toppled gates outside the city’s Victoria Park, where they lit candles. (Three organizers and media tycoon Jimmy Lai now face incitement charges for the event.)
Days after Hong Kong’s education secretary asked schools to call the cops on kids who disrespected the national anthem and threatened to punish students who chanted slogans, sang songs with political messages, or took part in a referendum on the new security law, dozens of students across the city formed human chains outside their schools, holding posters and banners to commemorate the anniversary of the protest movement.

Harcourt Romanticist is nonetheless pessimistic about Hong Kong’s future.
“After almost a year of protest, the regime tries not to solve problems politically, but intends to silence the people who raise the problems,” he says. “One thing for sure, this law isn’t about national security or terrorism in Hong Kong. I see this as a tightened grip over our freedom of speech, assembly, and the press.

“I had expected this day to come, but not so soon,” he adds. “It’s really heartbreaking and infuriating to see Hong Kong one step closer to death in the hands of a few.”
But that does not imply he is giving up. In fact, he says that is why he took great precautions to keep his identity anonymous: to ensure he has the freedom to fight on, even in a worsening landscape.

“I can only say that I am young,” he says, “young enough to stand against a totalitarian regime, for as long as it takes.”
Rachel Cheung's work has appeared in The Washington Post and Nikkei Asian Review. She was previously a reporter at the culture desk of South China Morning Post and is based in Hong Kong.
Published by Bado at 12:46 PM