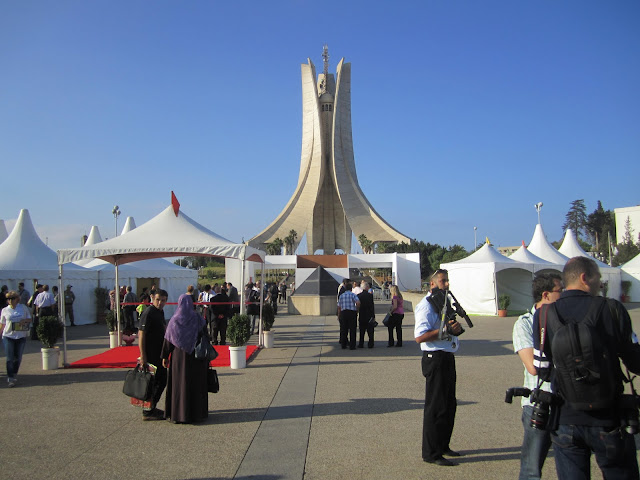 The fourth International Comics Festival of Algiers (Festival International de la Bande Dessinée d’Alger, FIBDA) took place between October 5 and 8, 2011, featuring a wide range of activities, from exhibitions to panel discussions, ending in an awards ceremony. Here’s a first look at this key event in the international and Algerian comics scene.

“Algiers, Bubbles Without Borders” was the theme of this year’s festival. Hundreds of comic artists and professionals crossed borders from thirty-seven countries including Canada, USA, Brazil, Cuba, Taiwan, Armenia, Spain, France, Belgium, Switzerland, UK, Democratic Republic of Congo, Benin, Gabon, Cameroon, Egypt, and Morocco to participate in the festival and to engage with each other and the Algerian audience for four days on the Esplanade Riadh El Feth. The festival program included exhibitions, conferences, and panel discussions with international and local speakers, workshops for professionals and for children, film screenings, and autograph sessions. The festival ended on Saturday October 8 with an awards ceremony, celebrating the creativity and inventiveness of comics emerging from the African continent.

A group of children at one of the exhibits

Visitors to the Mahmoud Aider exhibit
Even though this year’s audience arrived slowly due to the International Book Fair (Salon International du Livre d’Alger—SILA) that took place just a few days earlier, FIBDA had its share of enthusiastic visitors. A significant number of young people and families started to arrive on the third day–coinciding with the first day of the weekend, forming a mixed crowd of visitors, artists, and professionals. The informal and open atmosphere allowed the audience to mingle with their favorite comic artists such as the fathers of Algerian comics Haroun and Slim, or the internationally renowned José Muñoz and Oscar Zarate. This proximity proved an invaluable asset for the young festival, encouraging real interaction between the audience and the comics professionals, as well as within the comics community itself, fostering a mood of shared creativity.

Jose Munoz at an autograph session
Striving to break down barriers within its programming, too, FIBDA offered a variety of exhibitions, including a focus on American comics with works from C.B. Cebulski, John Layman, Brandon Jerwa, and Steve Lieber; an exhibition of Canadian cartoonist Bado; a look at the fantastic universe of Belgian François Schuiten’s Cités obscures; a special focus on African and Algerian artists; Moroccan comic artist Brahim Raïs’s award-winning Les Passants; an homage to Brahim Guerroui, the Algerian author and cartoonist who was killed in 1995; and a commemoration of the demonstration of October 17, 1961 that ended with Algerians drowned in the Seine river in Paris: “October 1961. Algerian Comic Artists Remember.” Conferences and panel discussions were equally rich in variety; with at least two each day, visitors could participate in discussions about comics publishing, comics as an educational tool or a tool against violence, the adventures of Tintin, The 1,001 Comics One Must Read Before One Dies, the possibility of opening a comics museum in Algiers, and finally, an inspiring reflection chaired by the FIBDA, on the importance of organizing such festivals.
The premise of crossing borders is central to the idea of the festival in part because of the very strong links with France that Algeria has long maintained, as Rachid Alik, communications manager of the FIBDA and moderator of most of these conferences, explained: “It was really important for us to invite speakers from a wide variety of countries, such as Paul Gravett from the UK, who can offer a different perspective on comics than the one we may be used to hear[ing] from France.”

Paul Gravett on The 1,001 Comics To Read Before One Dies
In keeping with that spirit of openmindedness, younger artists and emerging comics collectives had a strong presence at FIBDA, next to the most established comic artists, as in the case of Cuban comic artist Duchy Man Valderá who presented Crónicas Urbanas, a collection of works resulting from a series of workshops run by Belgian comic artist Étienne Schréder in Havana, Cuba in 2010, and that was awarded an honorable mention by the international jury of FIBDA that same year. Schréder is an experienced workshop leader who has been invited to FIBDA since 2008 to run  series of workshops with young Algerian artists. Among those is Rym Mokhtari, a young comic artist who has voiced the difficulty of being a comic artist today in Algeria but also commended the efforts of a festival such as FIBDA. Rym spoke at a panel about her experience in the workshops, a stint which resulted in a publication entitled Monsters. Two members of Tok Tok, the comic magazine created a few weeks before the Egyptian Revolution, were also present and widely praised by audience members and professionals alike.