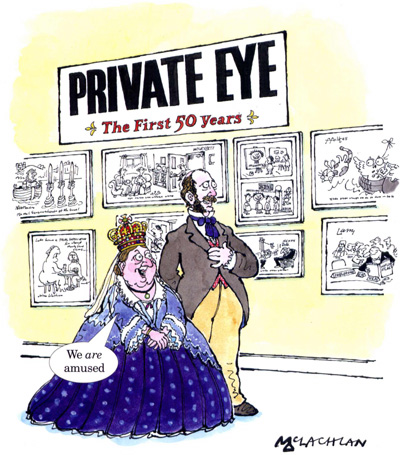 After much media hoopla, Private Eye: The First 50 Yearsopened at the Victoria & Albert museum in South Kensington, London, October 28. The exhibition will run until January 8.
The free exhibition explores the wealth of artistic talent that the magazine has showcased since 1961 and features original artwork for some of the funniest Private Eye cartoons.
Cartoonist Nathan Ariss attended the private view. He writes:

“According to one insider it was ‘the most fun’ the reverent halls had witnessed in decades. Yes, the PE PV at the V&A was AOK, and deemed a rather fine night indeed.


“A bunch of cartoonists were interspersed with some serious marble statues and seriously well-off people and then somewhat embarrassed by a warm and gracious speech from the Editor, Ian Hislop, who paid full tribute to the importance that cartoons have played in the magazine’s success.

“I imagine the exhibition will be equally as enjoyable as all the sparkling repartee and champagne on the night itself, but I’m afraid I became somewhat tired and emoticon as the night wore on. Thankfully the exhibition is still on until the new year.”


There are lots of cartoons in the show by members of the PCO, which runs the Bloghorn, such as Andrew Birch, Wilbur Dawbarn, Neil Dishington, Pete Dredge, Len Hawkins, Martin Honeysett, Tony Husband, Ed McLachlan, Alexander Matthews, Ken Pyne, above, Royston Robertson, Mike Turner, and the PCO patron Bill Tidy.Many cartoonists started their careers at the magazine, and they can be seen in this show, including Gerald Scarfe, Ralph Steadman, Willie Rushton, Barry Fantoni, Nick Newman and Michael Heath
.


The cartoons are in themed sections, on politics, royalty and social observation. There are single-panel cartoons, long-running strips and caricatures.
Hislop has chosen 50 of the best front covers, one from every year the magazine has been published. The exhibition also evokes the atmosphere of the magazine’s Soho office, with a recreation of the Editor’s desk, and a messy production table. 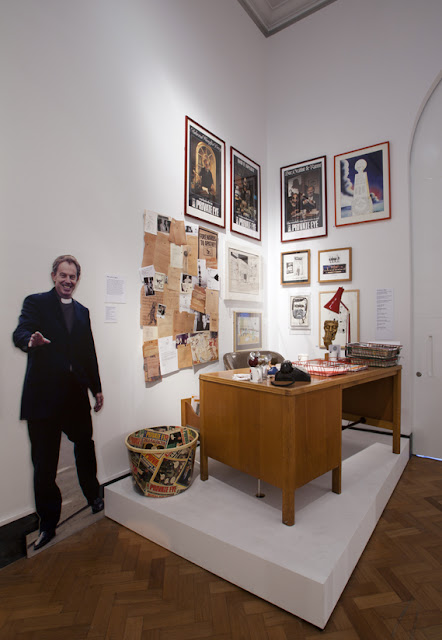 Here’s a round-up of some of the many Private Eye: The First 50 Years features you can currently see on the net:

A behind the scenes look at the production of the Eye, including a video of how a Ken Pyne cartoon progresses from idea to page, can be seen on the V&A site.


The Private Eye blog has a piece on putting the exhibition together.


… and by Creative Review.


Ian Hislop takes the BBC’s Will Gompertz on a tour of the exhibition. The site also has political leaders and pundits giving their views of Private Eye


And finally, to coincide with the 50th celebrations, the Chris Beetles Gallery has an online exhibition selling artwork by Private Eye cartoonists.

You can read more about the 50th celebrations for Private Eye here and here and you could also slum it and read Media Monkey, as provided by The Guardian.
Here are a few cartoons from the exhibition:

And from The Spectator:
Heath on Heath
JOHNNIE KERR